Mayo Co Council has been asked to write to Dublin Port and demand that it reverse its decision to cease facilitating a vital Ballina rail freight service.

The Western People exclusively revealed in our June 15 edition that frantic efforts were underway to restore the service after Dubin Port unilaterally decided to cease facilitating it for operational reasons on June 10 last. 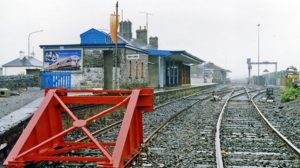 In the region of three of the Ballina service’s seven weekly runs were rerouted to Waterford but the remainder have had to be to transported by road instead, pending a resolution with Dublin Port.

Cllr Reape said she hoped the situation with Dublin Port would prove to be temporary, noting that local FF Dail Deputy Dara Calleary has made strong representations on the situation to the Minister for Transport.

She formally proposed that the Ballina Municipal District would send a letter to the Minister for Transport and to Dublin Port requesting that it reverse its decision on the Ballina freight service.

He said facilitating such a service is essential if Ireland is serious about becoming a low carbon, green economy.

The Ballina freight service is a huge asset, particularly given the plans to expand it with the addition of a new Waterford route in a matter of weeks which would enable Ballina to be developed as an economic hub and centre for freight services, he added.

Cllr John O’Hara described the situation as a “thump in the face for north Mayo” and warned that attempts to cease a vital rail freight service cannot be tolerated, given the difficulties of securing upgrades to the area’s access roads.

He resolved that locals would have to follow the example of pyrite and mica victims and protest in Dublin if a resolution cannot be found for the Ballina to Dublin freight service.

Stressing that the decision to cease the service had been taken by Dublin Port due to congestion issues, Cllr Jarlath Munnelly said pressure must be brought to bear on its management to find a solution.

Mr Tom Gilligan, Mayo CO Council’s director of services for the Ballina Municipal District, said he too was shocked and disappointed to learn of the cessation of the freight service and resolved to arrange to have the matter raised at the next meeting of the local authority’s Roads and Transportation SPC, stressing that the situation effects the entire county.