The motion will be debated tomorrow evening, Tuesday, June 15  – coinciding with the planned national demonstration in Dublin for 100% redress for pyrite and mica victims in Mayo and Donegal.

It seeks cross party agreement to provide 100% redress for homeowners who have been devastated by the pyrite scandal. 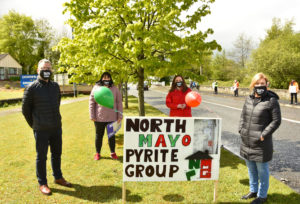 Deputy Conway-Walsh said: “Sinn Féin are bringing forward a motion to the Dáil tomorrow (Tuesday) to ensure 100% redress for people affected so that they get the support they need to reinstate their homes.

“Our motion also calls on the government to ensure that those responsible for this scandal are held to account and that the industry contributes to the overall costs of fixing this.”

The TD said the mica/pyrite crisis is a legacy of the light touch regulation and reckless practices of the Celtic Tiger years, adding that the government cannot be allowed to abandon the impacted families.

It is clear that the existing scheme for Mayo and Donegal is not fit for purpose, she continued, explaining that many families cannot afford to avail of the scheme.

“That is simply not fair or just.

“Families affected by this crisis in thousands of homes across Mayo, Donegal, Clare, Sligo,  and, indeed, across the state have been failed by this government. They worked hard, saved up for years and bought their homes in good faith, only to find those homes crumbling around them.

“This scandal has gone on for far too long and the government in Dublin simply isn’t listening. Families deserve safe homes. Their homes are crumbling around them through no fault of their own.

“The government must deliver 100% redress for those whose homes are crumbling as a result of defective blocks. Sinn Féin’s motion would deliver this 100% redress and ensure those responsible are held to account.”

The Deputy is today calling on all TDs to back the motion and ensure that families finally get justice, stressing that it is a matter of fairness and accountability.

“Sinn Féin will stand up for the home owners affected and ensure that they are treated fairly,” she concluded.

The North Mayo Pyrite Action group is urging the public to show similar support for their plight by travelling to Dublin to march alongside them from the Conference Centre at 1pm tomorrow, Tuesday, June 15.

Free buses have been arranged. Further information is available below: