Camogie star Charlton cherishing her gift of a season 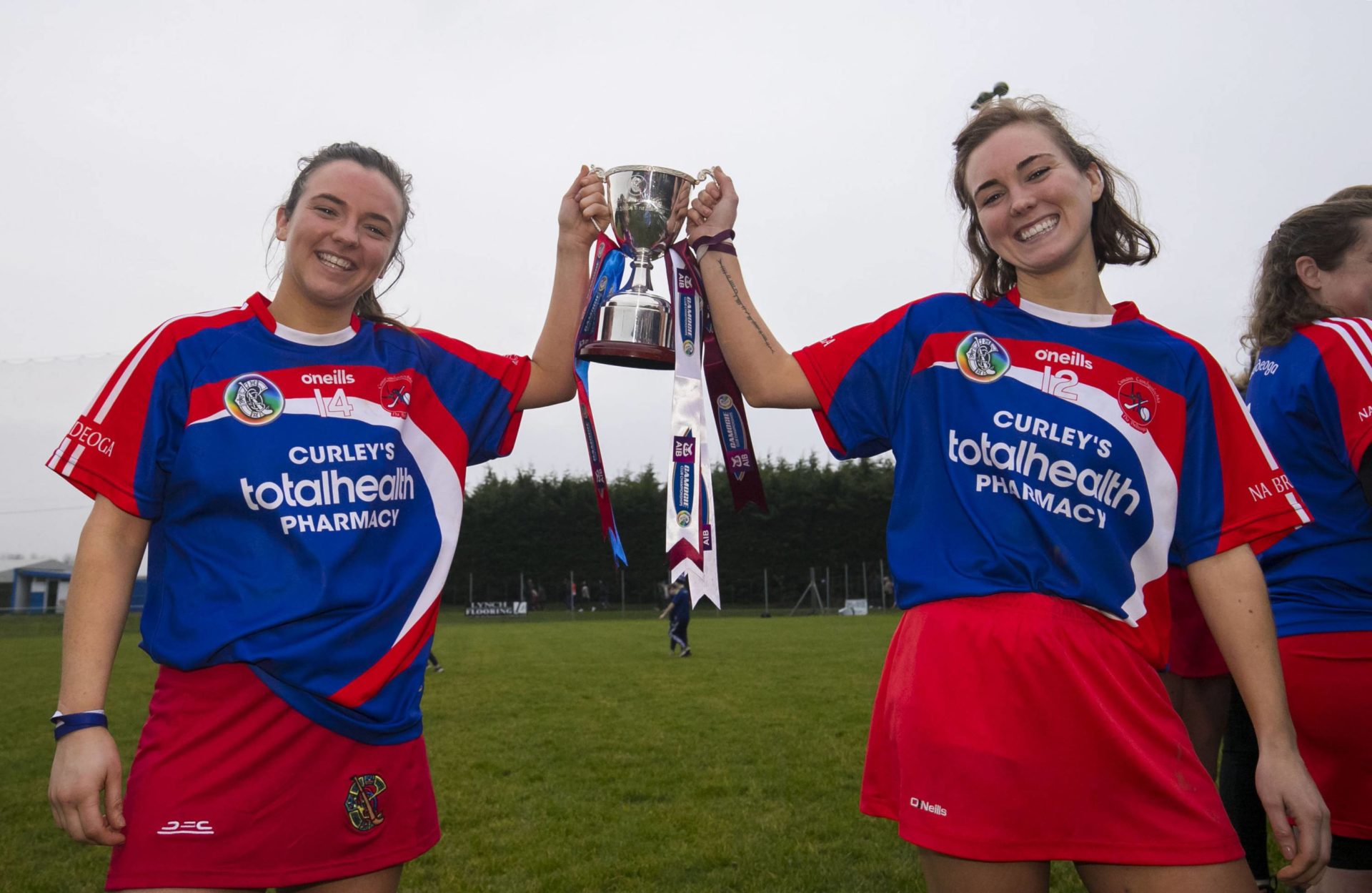 Áine Charlton (right) and her sister Mairead celebrate after Na Brídeoga’s All-Ireland Junior B club title victory in November 2019. The sisters are now back playing together in Mayo colours. Picture: INPHO/Tom O’Hanlon

When Na Brídeoga won their All-Ireland junior B club title in November 2019, the occasion was a doubly emotional one for Áine Charlton. Not only had she played a key role in an historic win for her club, but she had also played what she believed would be her last game of competitive camogie.

Charlton works as an Irish translator for the European Commission and she was due back in Brussels. But the onset of the Covid-19 pandemic threw her plans up in the air; she worked from home in Kiltimagh for the year and was still around early in 2021 when the idea of reviving the Mayo camogie team was taking shape.

Charlton’s was one of the first numbers dialled by newly-appointed Mayo manager, Jimmy Lyons. Charlton is almost unique in the Mayo panel, which is preparing to take on Cavan in a National League Division 4 semi-final this weekend; she is one of only two players of 40 (alongside Fiona Duffy) to have lined out at inter-county level for Mayo before this year.

That was in 2007, when, at the age of just 15, Charlton was drafted into a Mayo team that included, amongst others, at full-back, her own mother, Claire Charlton.

“The team was, basically, anyone in Mayo who played camogie,” Áine Charlton said this week. “It was kind of a gang going and having a bit of craic and playing a bit of camogie. After the first year, they drafted in some of us young ones.

“We played in Division 5 and it was run off in a blitz. We would be playing counties like Cavan and we would get absolutely hockeyed. If we put up a score on the board, it was a big celebration. Yvonne Byrne, the Mayo footballer, would have been one of the star players: she was able to get a few scores.

“So, for me, it’s amazing to see the younger girls now able to hold their own against teams. It’s great to see.”

They’ve been more than holding their own. Despite coming together only a couple of months ago, Mayo have already recorded wins over Kildare and Louth to qualify for this weekend’s semi-final. As a player who was denied the chance to represent her county for 13 seasons, Charlton is hugely appreciative.

“It definitely makes me cherish it,” Charlton said. “I suppose it also makes me feel old! But, for me, it’s almost as if I’ve got two extra seasons because of Covid. I had moved away, but I’ve been working from home because of the pandemic. Everything is just a bonus. 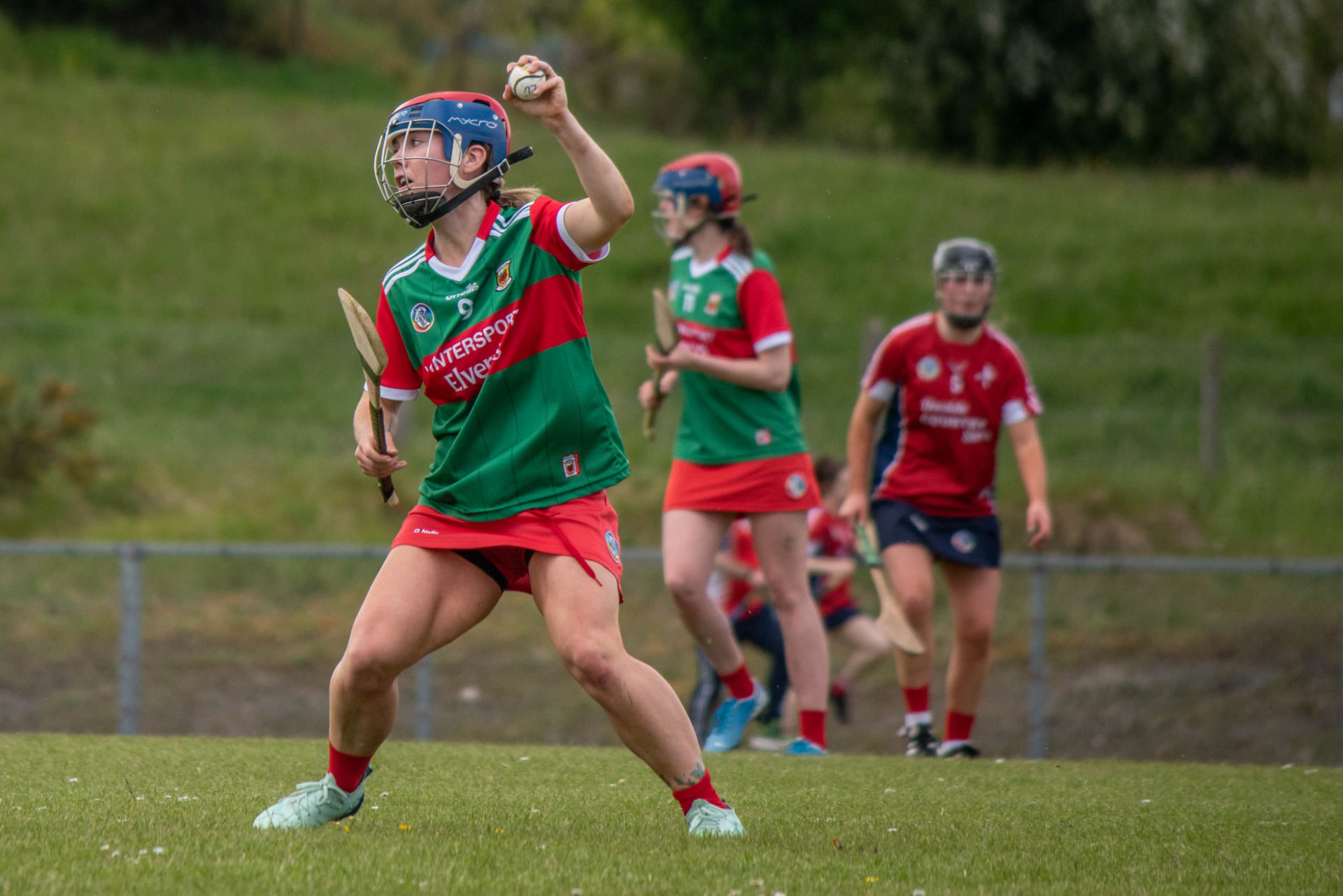 Aine Charlton in action for Mayo in their National Camogie League Division 4 clash with Louth in Tooreen last weekend.

“I just feel really proud of all these young girls. I’m kind of coming towards the end of my career. Obviously, it’s such a minority sport in Mayo and it will always be a bit of a struggle. But I’m really proud of all the work that people have put in over the years. I would have played with Sinead (Muldoon) and Ruth (Crowley); they’re putting in all this Trojan work over in Westport. Mary Kennedy is doing it in Castlebar.

“And it’s great that Jimmy and Sinead and Ruth are there now to drive it on in the county set-up. For all those club people who have been involved for the last 15 years, for me, it’s kind of emotional and I’m really happy to be involved.”

That Mayo have a team is a testament to the underage work being done in the clubs, but there have been some teething problems: Charlton obviously knew all her own clubmates from Na Brídeoga, but some of the newer faces have been harder to place.

“Even getting names right, because the panel is fairly big,” Charlton said. “For the Roscommon game, I was still trying to figure out everyone’s name and making mistakes. I wouldn’t have known a lot of the younger girls coming through with Westport and Castlebar.

“But the skill levels that they have just blow me away. I was talking to Peter Cassidy, who would have coached us at underage for years, and he was saying it was great to see.

“Lisa (Scahill, from Westport), our full-forward, who got the goals last weekend, she would have been involved in development squads all the way up. There has been an awful lot of hard work put in. We’re getting a lot of attention now, but there’s been so much work.”

Cavan, this weekend, will be a big step-up. The Breffni women won last year’s Nancy Murray Cup (the championship in which Mayo will compete in July) and won all three of their group-stage games, against Wicklow, Antrim, and Tyrone, to top Group 1 of Division 4 of the league.

On the upside, the easing in restrictions this week means that up to 200 supporters will watch the game in person. That should mean that the parents and families of the players will get to see them represent their counties.

“It definitely will make a difference,” said Charlton. “People want to see their loved ones playing, especially with it being the first year and it being so exciting. It’ll be nice to have a few supporters there.”

Hearing her tell it, Charlton gives the impression that this campaign will be a sort of last hurrah, a chance to line out for her county one more time before she heads back to her life in Brussels later in the year. But, as she said, she’s felt like that before.

“We actually joked about it at training the last day; they say I’m like the boy who cried wolf,” Charlton said. “I’ve said goodbye to that club about three times now and I’m still hanging around! They probably think I don’t have a job at all, I’m just spoofing.

“I will have to go back in September, I’d say, so I’ll miss the club season. And my sister, Mairead, she was supposed to be gone to Australia last year.

“But because I get to play with her is part of why this year feels like such a gift, getting to play for Mayo with my sister when I know both of us will be gone next year.”

Before we wrap up, Áine Charlton sends a couple of shout-outs: to Daryl and Ellen Henry, who first made her a Mayo camogie player nearly a decade-and-a-half ago, and Peter Cassidy and Fergal Delaney, who got Na Brídeoga off the ground and helped lay the platform for Mayo camogie’s rebirth.

“I hope they know that it’s all their hard work that has been the build-up to this,” said Charlton. “It’s a thankless job sometimes, but it’s because of them that we have a county team.”