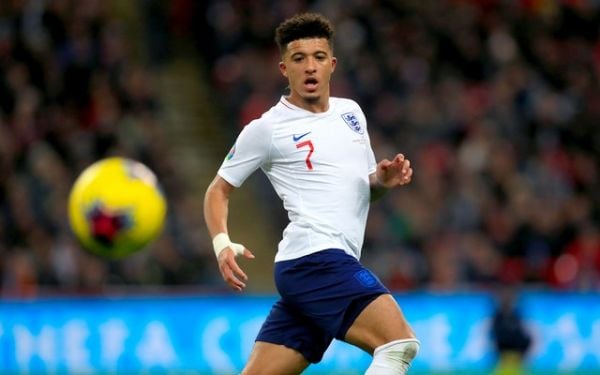 Jadon Sancho is focused on England’s Euro 2020 preparations and ignoring talk about his future as Manchester United continue discussions with Borussia Dortmund over a potential transfer.

Last summer was dominated by discussion about the talented 21-year-old swapping the Bundesliga for the Premier League, but the Old Trafford outfit failed to strike a deal with the German side.

The PA news agency understands United are currently in talks with Dortmund over a deal for the highly-rated winger, who is preparing for the Euros opener against Croatia on Sunday.

But while the footballing world is abuzz with talk about a potential big-money switch, Sancho is not getting caught up in the hullaballoo.

“I don’t really look at it,” he said. “When I’m during the season, I always focus on myself and the team because that’s the most important thing that we can do.

“You know, every time I’m on a pitch I’m always giving my all and obviously to create with what I do on a pitch and that’s with goals and assists.

“That’s why I really try to do and always work hard for the team.”

Pushed on whether the background talk is an unwanted distraction, Sancho told talkSPORT: “No, I’m cool about it.

“You know, there’s always going to be speculation, especially when you do well.

“It’s just how you handle that on the pitch and just keep doing what you’re doing.

“If you keep on doing that then I’m sure that won’t be a problem because the main thing is my football and that’s what I’m focused on at the moment.”

United have reportedly seen a €78 million bid turned down by Dortmund, who are holding out for a €90 million deal rising to 95 with a shorter repayment period.

Potential future club team-mates Marcus Rashford, Dean Henderson, Luke Shaw and Harry Maguire are all in the England squad alongside Sancho as talk rumbles on, but the winger has been giving little away.

“Of course all the boys have a lot of questions, you know,” the 21-year-old said.

“I feel like that’s with a lot of players because we’re all such great young talents and, you know, when you do well – again, like I said – speculation is always going to come around.

“Again, I just tell the boys, ‘look, I’m just focused on football at the moment’ and we just focus on the Euros, step by step.”

Sancho cannot wait to play in his first major tournament and feels in fine form after recovering from the thigh injury that kept him out of March’s internationals.

“When I got injured obviously I was disappointed because I was in such great form,” the Dortmund forward said.

“But I knew that I had to come back even stronger and obviously that’s what I done, my recovery as well was good.

“I was just focusing on myself and just being in the gym, working on a few things that I needed to work on. I came back even stronger, you know.

“I think we were around sixth or seventh in the league and obviously we needed to make Champions League qualification, so we had targets and especially to win the Pokal (German Cup).

“I’m happy that I came back and, you know, lifted the team with some motivation and with some goals and assists.”

The winger won the German Cup alongside compatriot Jude Bellingham, whose ascent shows no signs of abating with the 17-year-old midfielder joining Sancho in England’s Euros squad.