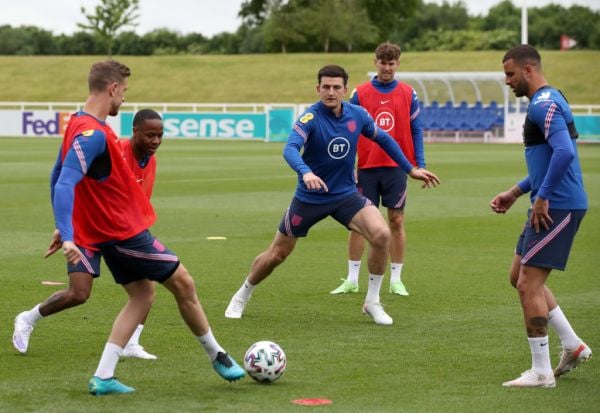 Harry Maguire trained with the rest of the England squad on Thursday as the centre-back continues to step up his recovery from an ankle injury.

The 28-year-old’s fitness has been one of the main talking points as England’s European Championship opener against Croatia on Sunday comes into focus.

Felt good to be back out there with the lads 💪🏴󠁧󠁢󠁥󠁮󠁧󠁿 pic.twitter.com/dsUiSR6Dea

The defender sat out the rest of the season, including being an unused substitute for the Europa League final loss Villarreal, and Gareth Southgate said it would be a “bonus” for him to be involved at the Euros.

But Maguire has been making steady progress and, having worked away from the group in the gym on Wednesday, continued to ease his way back by training with the rest of the 26-man squad.

Maguire looked comfortable taking part in training drills with team-mates during the open section of the session at St George’s Park on Thursday, although his availability for Croatia still looks questionable.