GAA: Where and when to watch this weekend’s fixtures 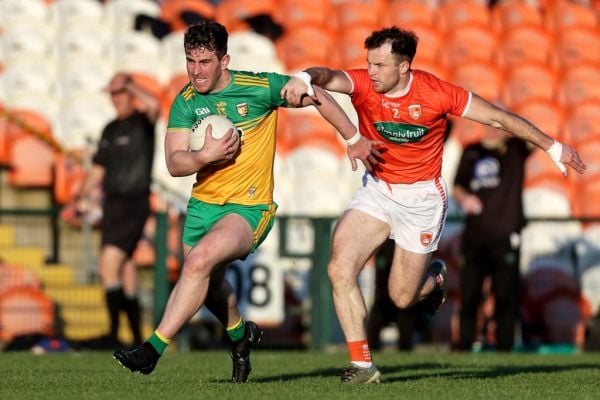 There’s a big weekend ahead with both the Football and Hurling National Leagues continuing.

Division semi-finals and relegation play-offs are on the agenda in the Football, while the Hurling has the final group games in Divisions 1 and 2.

Taking a win, a loss and a draw their group games, Tyrone face a heavy challenge travelling to the Kingdom after the only hiccup to Kerry’s campaign was a 4-9 to 1-18 draw against Dublin.

Tyrone coming off the back of a tough draw against Monaghan two weeks ago, may swing momentum in Kerry’s favour, and after clocking up 5-48 in their last three games, they’ve the form to go with it.

In the second Division 1 Football semi-final of the weekend, Donegal and Dublin travel to Cavan to see who comes out on top.

Still looking like they haven’t reached full speed, Dublin may up the ante on Saturday, and if they do, Donegal’s struggle to produce a winning result so far this year wouldn’t inspire confidence that they will be able to respond accordingly.

Coverage: Live on TG4 from 7pm.

Find out when and where you can watch this Saturday’s #AllianzLeagues Football action below!

The relegation play-offs this year sees the two bottom placed teams from each north and south group paired, with the two losers dropping a division for next season.

Roscommon’s complete lack of wins against Kerry, Dublin and Galway left them sitting pretty at the bottom of the Division 1 South group, while Armagh’s one of each – a win against Monaghan, a loss against Tyrone and a draw against Donegal – wasn’t enough to take them higher than third in the northern group.

The prospect of Division 2 will be a strong motivator, but Armagh’s showings to date would make them the favourites to stay up.

On the other side of the relegation play-offs, Galway travel to Clones in the hope of holding onto their Division 1 spot.

Monaghan put four goals past Donegal, so they’re well able to go for the jugular, and their grit against Tyrone to come back and get a draw was a good indication that they won’t be letting this result get away from them lightly.

Getting off to a disappointing start against Kerry, losing 4-21 to 0-11, Galway needed their six-point win over Roscommon to give them any chance of staying away from the relegation zone. Ultimately, their 4-point loss to Dublin killed that dream, but going down by just two scores against the All-Ireland champs may have somewhat softened the defeat.

Mayo rolled through the group stages in Division 2’s south group unimpeded, taking wins over Meath, Down and Westmeath.

While Clare did suffer a loss by the smallest of margins against Cork in their last group game, their outings against Laois and Kildare may have given Mayo a bit to think about.

Mayo are trying to get back to the place where they feel they belong, while Clare and Division 1 are all but strangers, having last been relegated from the top-flight back in 2002.

The visitors may feel their return to Division 1 after last year’s relegation is a done deal, but it’s a bubble Clare will relish the chance to burst.

Who will earn promotion to division 1?🔝

Also battling to climb to Division 1, Kildare host Meath in Newbridge on Sunday.

Having both claimed two wins and a loss from the group stages, it’s looking like a fairly even match-up.

However, in last year’s Leinster semi-final, Meath put up a whopping 5-9 to Kildare’s 0-15, so if they’re in that kind of humour this weekend they may be waving goodbye to Division 2.

Hoping to keep their winning streak going, Kilkenny travel to Ennis to face Clare in Round 5 of Division 1B.

After a slow start by Clare, losing to Antrim and Wexford, they regained their footing with wins against Laois and Dublin.

Those two wins came with ease for the Banner, but a win over Kilkenny would be a big step-up.

Either way, Kilkenny are out of touch at the top of the table and will either be crowned joint-Division 1 winners with their 1A counterparts, or contest the title if the pair meet in the Championship.

It’s been a mixed bag for Dublin, with two losses and two wins to date, but in the same time, Wexford have only claimed the slightly more favourable results of two wins, a loss and a draw.

The Dubs defeat to Clare last weekend despite claiming two goals will have been a knock for them, but Wexford’s hard-fought draw against Antrim last Saturday won’t have filled them with confidence either.

Last weekend’s loss to Galway put Waterford out of contention for the Division 1 title, but the goal is still alive for Tipperary who sit top of Group 1A on six points, just ahead of Galway on points difference.

A loss for Waterford wouldn’t spell disaster for them either, with Westmeath’s place in the relegation play-off already decided, but facing into their next fixture, a Munster quarter-final clash against Clare on June 27th, a strong performance would send them into the Championship on a good note.

Don’t miss a moment of Sunday’s #AllianzLeagues Football action! Take a look below at where and when you can watch the games. #BestSeatInTheHouse https://t.co/ketmuA9Phg pic.twitter.com/VjW2I4jzkW

A win for Cork would put them ahead of Galway on the League table, and if things go their way and Tipperary lose to Waterford, the Rebels could suddenly find themselves top of Division 1A with the title-potential that goes with that.

Galway, however, have been looking good, and their four-goal thriller against Waterford last weekend showed all the signs of a team out to win.

Coverage: Live on Spórt TG4, with deferred coverage on TG4 from 5.35pm.