Owners of pyrite-contaminated homes across the region are in a race against time to secure a better remediation package for their crumbling houses before the Government commences its summer recess.

The North Mayo Pyrite Group, which is leading the campaign locally for 100% redress for pyrite victims, will take to the streets of the nation’s capital in a peaceful demonstration at commencing at the Convention Centre at 1pm on Tuesday, June 15. 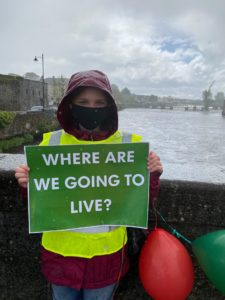 The event represents the pinnacle of efforts to raise awareness of their plight and they are pleading for support from the people of Mayo and the entire nation.

They will be joined in their peaceful demonstration by homeowners from Co Donegal whose properties have been similarly affected by the presence of mica in their blockwork.

They say the Defective Concrete Blocks Scheme launched by the Government last year to assist in remediating such contaminated homes is grossly inadequate and falls far short of the pyrite remediation scheme introduced for homeowners in the east of the country some years ago.

Many of those impacted by the scandal do not even qualify for redress under the terms of the new scheme while those that do are finding themselves facing costs of up to €50,000 or more to repair/replace their homes.

The victims are demanding that the Government facilitate 100% redress for a scandal that should never have occurred had regulations been properly enforced at the time.

Barbara Clinton from the North Mayo Pyrite Group said it was clear from a recent meeting between group representatives and Minister for Housing, Mr Darragh O’Brien, that the Government had no appetite to revise the Defective Concrete Blocks Scheme.

Ms Clinton said people’s homes and lives have been left in limbo by the scandal and that they cannot be expected to wait like that while the Government is in recess this summer.

The North Mayo Pyrite Group and its counterpart in Donegal are appealing to the general public to show solidarity for those that bought their homes in good faith and now – through no fault of their own – are literally watching them fall apart before their eyes.

“We are asking everyone that has been affected by this issue or thinks they may be affected by it or knows someone who is to come and stand with us in Dublin for a few hours on June 15. We have to do something or we will forever live with the regret that we did not try,” said Ms Clinton.

A number of local businesses have already stepped up to the mark by sponsoring buses to Dublin for the Mayo protestors on June 15 and the group is urging other local traders to follow suit.

Such support will be remembered by the campaign and its supporters, Ms Clinton assured.

The North Mayo Pyrite Group, which can be contacted via its Facebook page, is also hopeful that the elected members of Mayo Co Council will follow the example of their Donegal counterparts and table and unanimously pass a motion supporting the campaign for 100% redress for pyrite contamination.