All aboard: Cycle Against Suicide mascot gets royal treatment

Ballina played host to a very special guest last weekend as Doreen the Teddy made a pit stop at the Quay Village.

The cute bear is a mascot for the national mental health charity, Cycle Against Suicide.

When its flagship annual Cycle Against Suicide fundraiser could not go ahead this year due to Covid-19 restrictions, Doreen (and some identical friends) stepped into the breach and are undertaking a nationwide relay that will see them meeting with some of the charity’s volunteers in every county in the coming weeks. 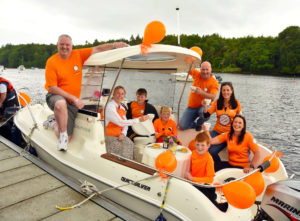 The event kicked off on Tuesday, June 1 and by Friday evening last, Doreen was on board with local volunteers in Ballina who hosted her in real style on the River Moy.

Doreen the Bear was created as a poignant tribute to Easkey native, the late Doreen Conlon, who was a stalwart of the Cycle Against Suicide charity and sadly passed away in December, 2017.

You can follow her travels and support the charity via the Cycle Against Suicide social media platforms.