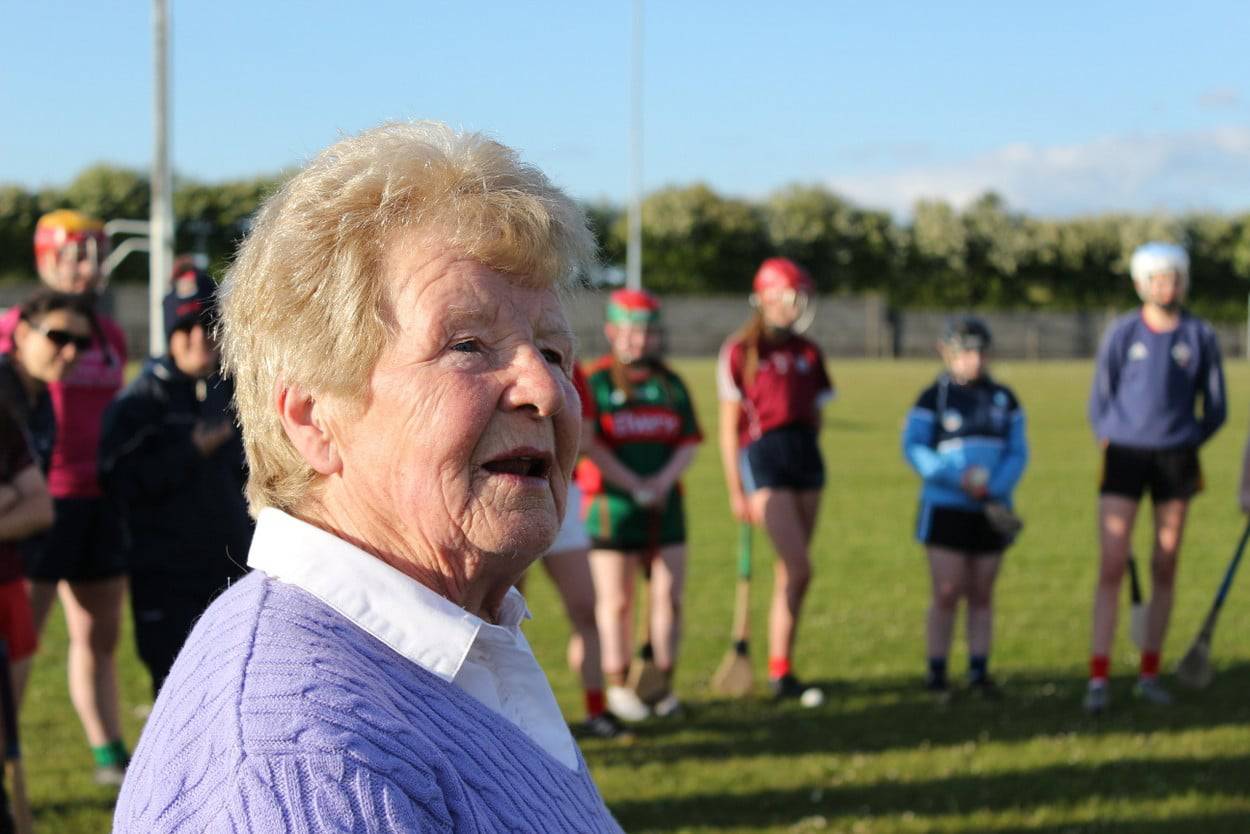 Josie Mulligan (nee Ruane), who captained the Mayo camogie team in the All-Ireland senior final of 1959. She visited the current Mayo panel at their training session in Ballyvary last week to talk to the players about the rich history and heritage of the game in Mayo.

Your column was in Tooreen last Saturday, taking in what was, to my shame, a first-ever game of camogie in eight years reporting on sport for this paper. I was like a fish up a tree.

I know just about enough about camogie to know what I don’t know, if that makes sense. I don’t really know the intricacies of the rules and how they differ from those of hurling in subtle but still crucially important ways. I don’t know very many of the players, despite the bulk of them coming from near home in East Mayo. And, the greatest sin of all, I don’t know my history. We’ll get to that in a bit.

The first thing that should be said is how warm the welcome was, as always, in Tooreen. It was a sombre day for the club, the 11th anniversary of the death of Adrian Freeman in a car accident in Australia. Adrian, a Tooreen and Mayo hurler and brother of current Mayo player Cathal, was remembered and honoured with a moment’s silence before throw-in at the grounds that now bear his name.

But there was a great atmosphere around the place, thanks in no small part to the glorious weather over the weekend. A few locals had gently bent the rules on attendance, populating the grassbanks around the sides of the pitch. And there was positivity and momentum too behind the team itself, brought about by their win over Kildare at the same venue seven days earlier.

Adrian Hession and Peter Cassidy were set up beneath the pressbox, marshalling the livestream of the game to fans of Mayo camogie around the world. Caroline Kelly, the Mayo Camogie Board’s hard-working PRO, was busy ensuring all was well on the social media end of things.

As for the game itself, Louth were sticky opponents for the first 30-odd minutes but Mayo gradually got on top and ended up running away with it in the second half, racking up a massive total of 7-14. The win guaranteed them a Division 4 semi-final against Cavan next weekend.

You’re probably aware of it by now but it bears repeating; this is essentially a brand-new team, brought together from scratch by Jimmy Lyons and Sinead Muldoon at the start of this year. Mayo hadn’t entered a camogie team at adult inter-county level since 2007, an entire generation of potential players denied the chance to represent their county.

But they’re back now, and going well; three games, two wins and one battling loss to Roscommon. It’s an exceptionally young team for senior inter-county, to the extent that the first real test of the season is arriving over the next couple of weeks as a sizable chunk of the panel prepare to sit their Leaving Cert.

The biggest contributing club by far is Na Brídeoga, the Tooreen-based club who have been a lone voice in the Mayo camogie wilderness for much of their 15-odd year existence. They won an All-Ireland club junior B title in 2019 with most of the players who are part of the county squad now.

But there are positive signs of the game beginning to spread across the county. Both Westport and Castlebar camogie clubs have a number of players on the panel, numbers that will grow in the coming years as the flourishing underage systems in the town clubs begin to produce senior players.

Westport, in particular, have some hugely promising youngsters coming up the ranks who will no doubt be eager to emulate the likes of Lisa Scahill, the Westport full-forward who scored four goals on Saturday, and Emily Kelly, who was (to my admittedly untrained eye) probably the best player on the pitch.

Helen O’Malley, the team captain, made her first appearance of the year on Saturday after recovering from a broken finger; to hear Jimmy tell it afterward, they hadn’t expected her back until she walked into the dressing-room having driven down from Dublin, where she works as a teacher and hurls with St Judes. Ava Lambert, another Westport player, is a squad member of both the Mayo camogie and ladies football teams, a balancing act that must be as demanding as it is commendable.

The way Jimmy puts it, he was sort of shanghaied into this management gig. His football credentials are impeccable, having played at the highest level for Aghamore, St Jarlath’s and Mayo and managed Aghamre at under-21 and senior level, but his previous experience in camogie was a bit more limited; his daughter Rachel plays for Na Brideoga and Jimmy had run some coaching sessions.

But he has committed to the job completely. There are only about 60 adult camogie players registered in Mayo and Jimmy wisely invited every one of them to be a part of the initial panel, which was subsequently whittled down to about 40. It means everyone feels as if they’re being given a fair crack of the whip and everyone is included as a part of the journey.

He has also been quite brilliant in who he has brought in to speak to the panel. They met a bonafide legend of the county this week in Josie Ruane, the woman who captained Mayo in the All-Ireland senior camogie final of 1959. She dropped in to midweek training in Ballyvary to talk to the players and share some stories.

Now, hand on heart, I had no idea that Mayo had once contested an All-Ireland senior camogie final until shortly before last Christmas, when my colleague Paul O’Malley conducted a fascinating interview with Eileen O’Boyle (nee Clarke) from Manulla, who was another member of that Mayo team that took on Dublin in the All-Ireland of 1959.

As it turns out there is a rich history of camogie in this county, one that isn’t half as widely known about as it should be. There were once clubs dotted around the county, from the big towns like Ballina and Castlebar to villages like Manulla, Islandeady and Newport.

The cup awarded to the All-Ireland senior camogie champions every year is named in honour of a Mayoman, Sean O’Duffy from Killawalla, who was instrumental in organising camogie at a national level around the middle of the 20th century.

As for Josie Ruane, Eileen Clarke and their teammates, their big moment came 62 years ago this year. They beat Galway in a Connacht semi-final, Sligo in the Connacht final and Munster champions Waterford in an All-Ireland semi-final replay to qualify for the final against Dublin. They lost fairly convincingly on the day but to make it as far as All-Ireland final day was an incredible achievement for the county.

Josie (now Josie Mulligan) shared her stories of that time when she joined the present-day squad in Ballyvary this week. Despite the 60-plus years of an age gap, Josie (who also scored three points in that All-Ireland final) showed the current players the history and heritage that comes with playing camogie for Mayo. She herself played inter-county for 20 years and told the girls that she loved every minute of it.

“She’s a fantastic woman altogether,” said Jimmy Lyons after the game on Saturday, still clearly in awe of meeting Josie.

“She spoke so enthusiastically and vividly about 1959, how she loved playing camogie.

“Even though we’re only starting back after a number of years of not being at this level, there is a fantastic tradition of camogie in Mayo.”

They’re out against Cavan next weekend, and the championship begins in July. They’ll be in the Nancy Murray Cup, the junior B competition named in honour of the Antrim woman who refereed the 1959 All-Ireland final. They’d love your support.