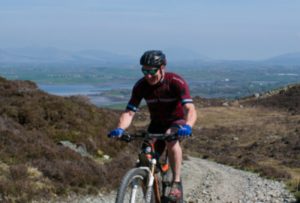 Five Mayo mountain bike enthusiasts are taking on the Everesting challenge. They will ascend and descend a total of 8,848 metres, the elevation of Mount Everest. The test will be intensely physical as well as a huge test of the group’s physical, mental and technical endurance.

It has been described as ‘fiendishly simple, yet brutally hard. Everesting is the most difficult climbing challenge in the world’.

The off-road cycle challenge will take place on the iconic pilgrimage trail of the Western Way, which is located on the Westport side of Croagh Patrick on Saturday, June 19 next.

The five are raising much-needed funds for Croí, the heart and stroke charity and Mayo Mental Health Services.

The trail being used in the challenge is known locally as Skelp, which is 700m long with 88m of elevation per ascent. To achieve the 8,848 metres needed, the team will ascend and decend the mountain over 110 times.

The first such challenge ever to be undertaken in Ireland, the cyclists are Rachel Nolan from Ballina; Colin Loughney, Hollymount; Trevor Costello, Islandeady; Bryan Hyland, Westport and Padraig Marrey, Ballinrobe. 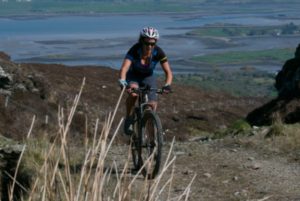 Rachel Nolan, Ballina is the only female participant in the challenge

Organiser Marrey will lead the Mayo mountain bike group who are trying to promote off-road cycling. “If we can get kids off-roading from an early age, it will make them better bike handlers.”

To donate in support of this incredible challenge, visit: www.idonate.ie/everestingoffroad or email: [email protected].