The North Mayo Pyrite Group is urging all those impacted by the pyrite-contaminated blocks scandal to support the planned peaceful demonstration in Dublin on June 15 next.

The campaign is hoping local businesses will show their solidarity too by sponsoring buses to the capital for those participating in the demonstration as has been done in Donegal. 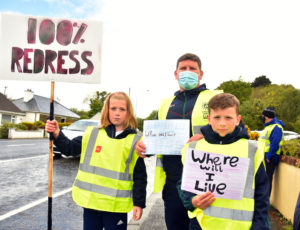 Pictured at the peaceful demonstration for 100% redress for pyrite homeowners in Ballina on May 22 were Kevin, Kenny and Daragh Rafter on the Killala Road. Picture: John O’Grady.

The June 15 event is being planned by homeowners in Donegal and Mayo whose houses are crumbling due to the presence of deleterious minerals – mica and pyrite – in the blockwork of the structures.

They maintain that the Defective Concrete Blocks Scheme that was introduced by the Government last year to assist in remediating their properties is grossly inadequate and leaves them facing costs of up to €50,000 or more.

The homeowners are calling for 100% remediation, similar to what has been afforded to homeowners in the east of the country that benefited from a separate pyrite remediation scheme.

Barbara Clinton from the North Mayo Pyrite Group told the Western People that it was clear from a meeting between group representatives with Minister for Housing, Mr Darragh O’Brien last week that the Government has no appetite to revise the Defective Concrete Blocks Scheme.

With the Government due to go into recess in four weeks time, Mayo and Donegal homeowners are in a race against the clock to secured 100% remediation and are working hard to build awareness nationwide of their plight with initiatives like the June 15 demonstration.

Ms Clinton said people’s homes and lives have been left in limbo by the scandal and that they cannot be expected to wait like that over the summer months:

“We are asking everyone that has been affected by this issue or thinks they may be affected by it or knows someone who is to come and stand with us in Dublin for a few hours on June 15. We have to do something or we will forever live with the regret that we did not try.”

Barbara said the Mayo group would also like to see businesses in Ballina and around the county follow the example of their Donegal counterparts who are supporting the campaign by sponsoring buses to Dublin for the demonstration on June 15.

Their support will be remembered by the campaign and its supporters, she assured.

The North Mayo Pyrite Group is also hopeful that the elected members of Mayo Co Council will follow the example of their Donegal counterparts and table and unanimously pass a motion supporting the campaign for 100% redress for pyrite contamination.