Minister of State at the Department of Rural and Community Development & Department of Social Protection, Mr Joe O’Brien, was in Mayo today to formally launch three new Co-Ops.

Minister O’Brien praised the three initiatives, noting that they were diverse and interesting. 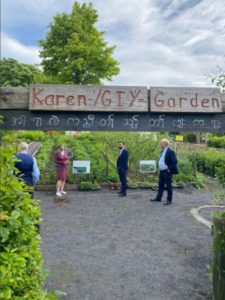 Minister Joe O’Brien Tweeted this photograph from his visit to the Karen Community Garden in Balllina this morning.

Dealing with issues ranging from folklore projects to bee-keeping, each maintains a keen eye on how its work can enhance surrounding communities and their residents, he noted.

“All three of these projects have developed in response to key social, cultural, economic and environmental issues and opportunities. They are indicative of the resourcefulness of local communities in identifying an issue and developing a plan to address it and enhance all aspects of the community.

“It is always welcome to see firsthand the benefits that funding from my Department can bring to local communities,” the Minister said.

Welcoming the Minister to Mayo, Deputy Dillon noted that the community-led cooperatives emphasise the spirit within the groups involved:

“I must compliment all involved and look forward to working alongside these groups in the coming weeks and months.”

The Minister’s itinerary for today also included visits to several different DRCD and/or DSP-supported projects across the wider Ballina/Straide regions including the Karen Garden, the Involve Project, the Mhaoil cattle herd and Moy Innovations.

He also visited the Michael Davitt Museum in Straide, Foxford where, in addition to learning about recent developments there, he also met with representatives of several innovative projects, including the Children’s Land League from two local national schools and members of the Doolough Valley project committee, and launched the Swinford Needs Assessment Survey.