A Mayo couple engaged in a national televised DIY competition plan to donate their prize money towards the development of a local sensory park for children if they win.

Adrian Padden and his partner Roisin McDonagh, who live in Cloghans near Knockmore, appeared on The Big DIY Challenge programme on RTE last Thursday night, May 27 and have been heading the programme’s people’s choice poll ever since. 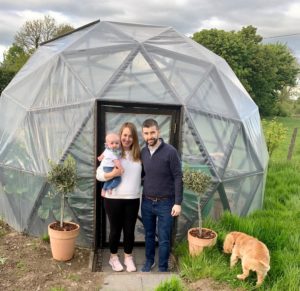 The programme pits amateur DIY-ers from all over the country against each other as they seek to create a DIY project that will impress the judges and the viewers sufficiently to scoop a €10,000 prize fund.

Roisin admits that Attymass native Adrian, who is a mechanical engineer, did most of the heavy work on the project while their five-month-old baby boy, Reilly, kept her busy.

The greenhouse was made by cutting and painting a myriad of wooden triangles that then had to be fitted together to form a dome shape which was covered in polythene.

It was a major task for Adrian as if one of the wooden triangles was measured incorrectly it might mean starting all over again, explained Roisin, who is from the Killala Road and works in Lionbridge.

Even more impressive is the fact that the couple only had 10 days to complete the challenge, with the adjudicators reviewing their progress intermittently.

The couple created raised beds and a seating area inside the greenhouse where they can relax and enjoy the heat while they watch the plants and produce they have planted grow.

Adrian and Roisin are one of very few west of Ireland-based entrants in the show and are hoping for strong support from local communities in the public vote which closes this Wednesday, June 2.

Having recently become parents themselves, they have decided to donate the prize money – if they win – towards the planned sensory park development for the Tom Ruane Park in Ballina.

You can vote for them by clicking here and selecting number 6 from the list.