Mayo warming to the task in condensed league campaign 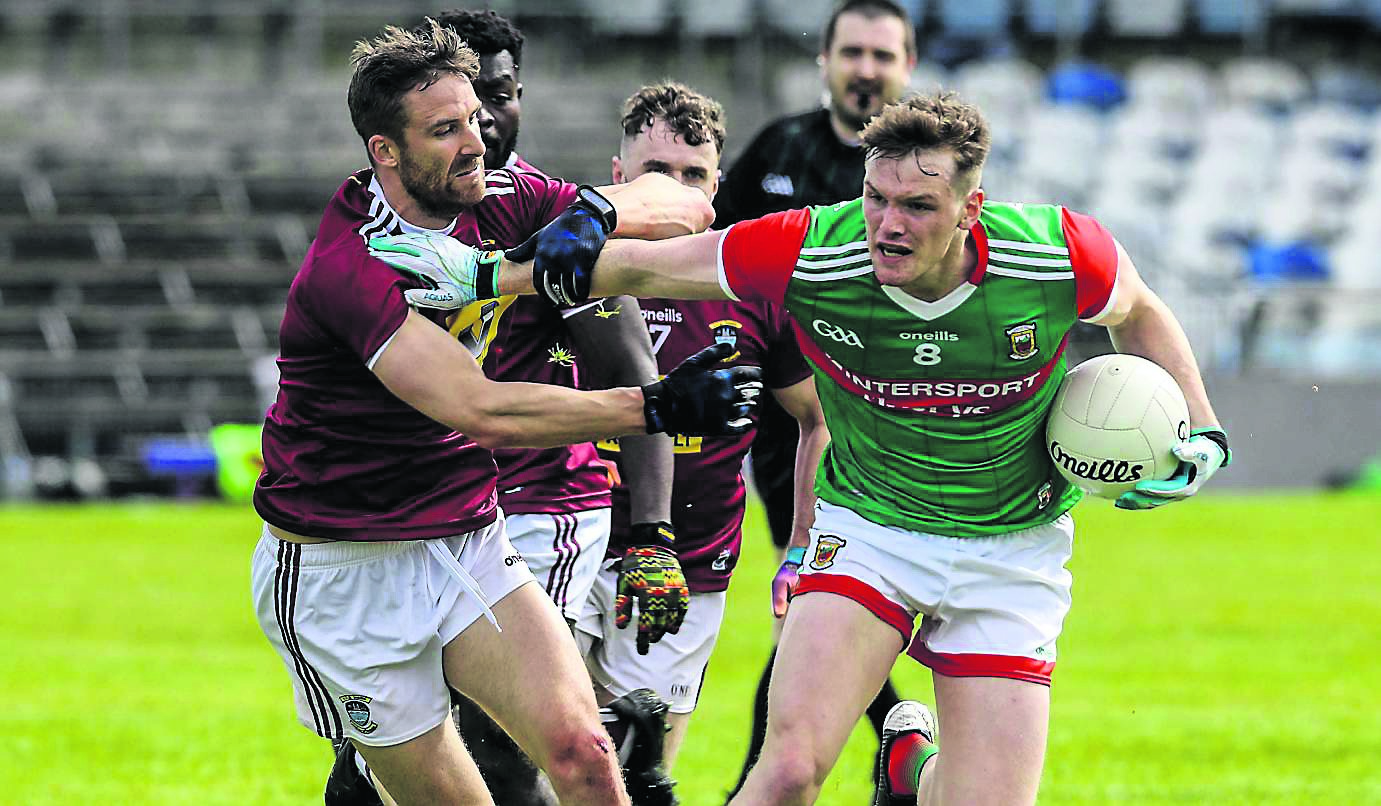 The only real qualm we had coming out of MacHale Park after Mayo’s National League first-round over Down was that the hosts had learned relatively about themselves, such was the comfort of their Round 1 win over an underwhelming visiting side. It wasn’t a complaint anyone had leaving Cusack Park in Mullingar last weekend after Westmeath had provided a rigorous examination of Mayo’s early-season state of mind.

Mayo ultimately came through with a three-point win, a result which, combined with Meath’s win over Down on Sunday, assured them of a place in the Division 2 semi-finals. Mayo’s Round 3 clash with the Royals in Castlebar this Sunday is now effectively a dead rubber, with both counties already guaranteed a semi-final berth and a one-off shot at gaining immediate promotion back to the top division.

But James Horan and his management team still came back across the Shannon on Saturday evening with plenty to chew over, particularly with that semi-final and the Connacht championship opener against Sligo quickly approaching over the horizon.

It was a performance with plenty of flaws, from the lethargic start to the concerning inability to put Westmeath out of the game before they had the chance to launch their late comeback. Mayo’s experience and some big contributions from key men got them over the line but it’s fair to say that some of the early optimism engendered by the win over Down took a dent.

It’s important to note at this point that Westmeath were much worthier opponents than Down had been a week earlier. They arrived with a clear game plan, to frustrate Mayo by massing bodies back and striking at pace on the counter, and for significant periods of the game the tactic worked well. Mayo were unable to open any regular supply lines to the inside forwards, to the extent that Tommy Conroy and Ryan O’Donoghue were reduced to the role of bystanders for much of the game.

Instead, Mayo turned to their athleticism and physical power, runners coming from deep to punch holes in the Westmeath lines. The starting full-forward line of Conroy, O’Donoghue and Cillian O’Connor contributed a combined three points from play on Saturday, which was the same tally as Paddy Durcan managed on his own from centre-back. It was that sort of a game.

Durcan was outstanding here, to be fair. Whether it’s the captaincy (which has been bestowed upon him for the first two games of the league, although official confirmation for the year remains elusive) or the sting of missing out on what should have been a second All-Star for 2020, the Mitchels man taken a noticeable step forward in the leadership stakes so far this year.

In Mullingar he was a relentless surging presence up the spine of Mayo’s attack, constantly running off the shoulders and forcing contact from the Westmeath defenders. His two points in the final quarter were critical to Mayo’s win, both arriving at moments when Westmeath were growing in stature.

He was ably supported by his wing-backs, Eoghan McLaughlin and Michael Plunkett, who both had license to roam their flanks, and by Mattie Ruane, who turned in a second excellent midfield display in the space of as many weeks, kicking two first-half points for good measure. Conor Loftus, restored to a starting place at centre-forward, was also an industrious presence as he prodded and probed for weaknesses in the maroon ranks.

But there were plenty of negatives in the Mayo performance too. More than once they were caught short at the back with too many bodies pushed forward, allowing Westmeath to attack open space at speed.

Both goals came as a result of counter-attacks, and while there was an undoubted element of luck involved in the first, when Ronan O’Toole’s rebounded shot fell kindly to Luke Loughlin, the manner in which Westmeath knifed through the heart of Mayo’s defence in the build-up to the penalty will be a concern, particularly given the similarities to the goal Stephen McConville scored for Down a week earlier.

Mayo were more comfortable when the intensity of the match ratcheted up in the third quarter and they were able to play the high-octane game that best suits their talents. Westmeath scored just a single point – a mark from O’Toole – between half-time and the second water break. Mayo only scored three points themselves in the same span but they could and probably should have had more; Diarmuid O’Connor was a whisker away from finding the corner of the net with a daisy-cutter and Tommy Conroy was denied what looked a clear-cut penalty under the new rules when he was impeded by Boidu Sayeh with a clear run on goal. 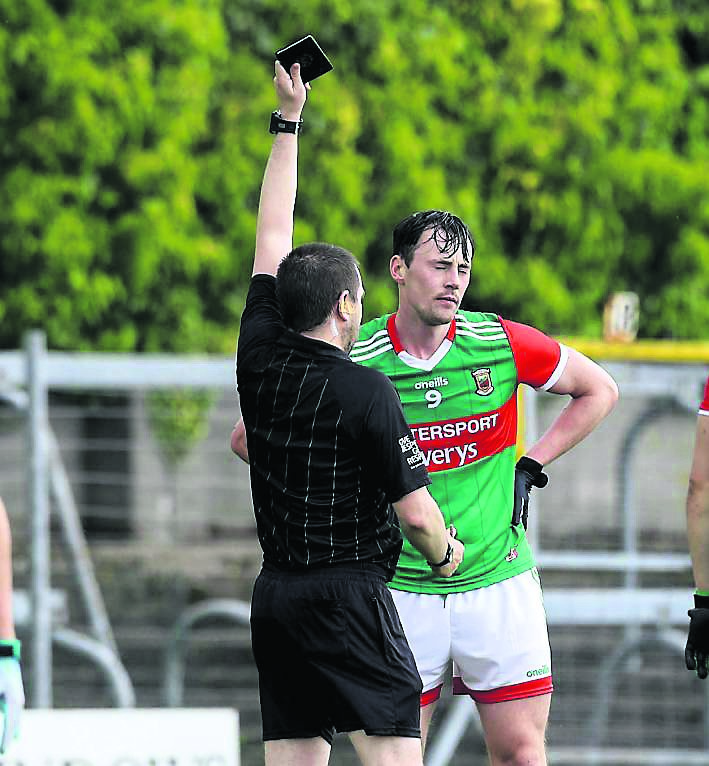 Horan queried after the game why Mayo weren’t awarded the penalty and Sayeh sin-binned, as Diarmuid O’Connor had been in the opening half, and while Sayeh’s infringement wasn’t as blatant as O’Connor’s hand-trip on Ronan Wallace, it did seem like an inconsistent application of the rule on the part of Noel Mooney.

Horan handed out a couple more senior debuts, giving Ben Doyle his first run in the league (the Westport defender played in an FBD win over Leitrim in 2019) and introducing Jack Carney as a replacement for Diarmuid O’Connor late on. Carney, who is still eligible to play under-20 this year, is one of the most highly-rated young midfielders in the county and his debut also represented a fantastic moment for Kilmeena, a junior club very much on an upward trajectory.

They brought to five the number of league debuts awarded over the last two games (following on from Enda Hession, Rory Brickenden and Aidan Orme against Down), evidence if it was needed that Horan will be as good as his word when it comes to giving young players their opportunities.

Yet for all that, it was the more experienced heads who ultimately guided Mayo over the line last Saturday. Colm Boyle took a while to settle into the game after coming in at half-time, with Westmeath targeting the long ball to Luke Loughlin on a few occasions early in the half, but the Davitts veteran soon settled and had a couple of trademark thrusts upfield later in the game.

Kevin McLoughlin also played a key role, clipping over a vital late point after Loughlin’s two ‘45s had trimmed Mayo’s lead to just two points. Durcan underlined his status as one of the panel’s key leaders with his performance while Cillian O’Connor again proved the inestimable value of an ultra-reliable dead-ball specialist with his seven converted frees, plus a stunning effort from play from out on the sideline to nudge the game definitively out of Westmeath’s reach in injury-time.

The reward for Mayo is a pressure-free clash with Meath this Sunday (throw-in 1.45pm). It’s tantamount to a free swing; win or lose, both teams are headed to the semi-finals. You could argue that topping the group would give Mayo a marginally easier task in the semi-final but Division 2 South is much more tangled up than its northern counterpart heading into the final round of games and trying to predict semi-final opponents is fraught with risk.

If the parallel aims of this league campaign are to secure promotion back to Division 1 at the first time of asking and to introduce some new faces ahead of the championship, then you would have to acknowledge that the two games to date have been successes on both counts. Round 2 was undoubtedly a stiffer test than Round 1 but Horan and his camp will know that the real examinations still lay ahead.