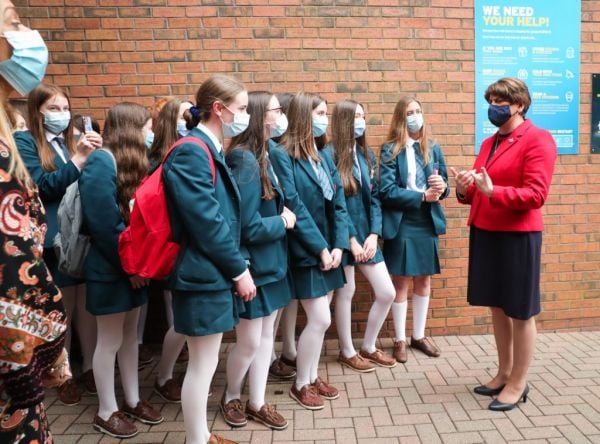 Arlene Foster has said representing Northern Ireland has been the “greatest privilege of my life” as she prepares to step aside as First Minister.

She also hinted during a visit to a school in Co Down that she would like to push for reforms to protect people from abuse on social media when she leaves politics.

Mrs Foster has stepped aside as DUP leader following the ratification of Edwin Poots’ electoral victory in a party leadership contest on Thursday night.

She announced her intention to resign four weeks ago after being told of a letter of no confidence in her leadership.

Mrs Foster previously indicated she would stay in post as First Minister until the end of June, but on Friday said if Mr Poots names his new front bench on Tuesday, she will leave office immediately.

Despite recent events, Mrs Foster told a group of sixth form students that she would recommend a political career.

She visited Banbridge Academy in Co Down on Friday.

Asked by pupils if she would recommend a career in politics, Mrs Foster said: “Yes I would, without hesitation.

“Despite all the challenges, it is a hugely rewarding career. As well as representing my constituency, I have been able to represent Northern Ireland.

“That has been the greatest privilege of my life. To go to places and sell Northern Ireland as a place to invest in and a place to visit is a tremendous privilege.”

Looking back over her career, which included seven years serving as the Stormont minister for enterprise, trade and investment, she said her greatest achievement may be the work on tourism, and the efforts to make Northern Ireland a destination which attracts visitors from around the globe.

Asked if she had any regrets, Mrs Foster said: “All of us are going to look back and wish we had done some things differently. But it’s important to learn from that – everyone makes mistakes, but we should use the lessons from this to move forward.”

The First Minister also hinted she would like to contribute to work addressing abuse on social media.

Mrs Foster has spoken out previously about the abuse she has received on social media.

Earlier this week, she was awarded £125,000 in damages after a tweet including a false rumour about her by TV personality Dr Christian Jessen was judged at Belfast High Court to have been defamatory.

“I do hope to keep talking about social media, the harms it does, and the problem with anonymous abuse,” she told the pupils.

“People say things on social media that they wouldn’t say on the street, and I am very concerned about it.

“The Government in Westminster is looking at reforms, but I think we need to go further – I would hope to use my skills and experience as part of this.”

Waterford search and rescue base ‘a life and death issue,’ says Minister for Transport