As the Connacht senior football championship edges ever closer, the games cannot come a moment too soon for Charlestown man Thomas Fleming (24) who has seen his ambition for a career in sports journalism paused during the Covid pandemic. Thomas is a sports contributor to Ocean FM Radio and has been waiting impatiently for the season to kick-start. 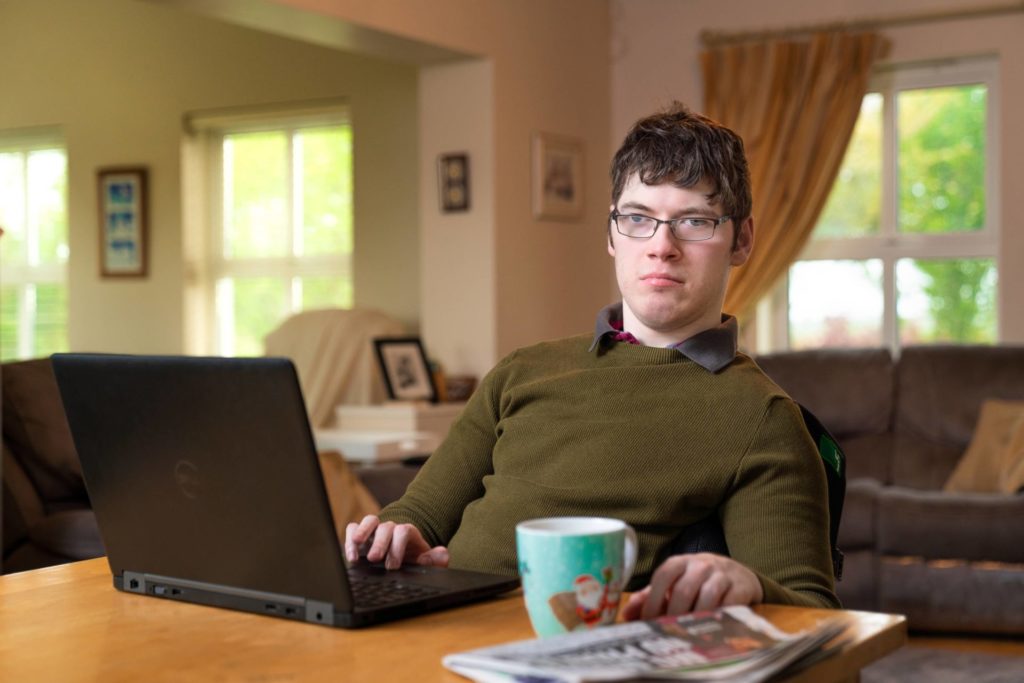 Thomas Fleming from Charlestown is refusing to let his disability stop him from realising his dream of being a sports journalist.

Thomas is a self-professed football fanatic although he has never been able to play football himself, due to physical disabilities affecting his mobility and sight. But this hasn’t dampened Thomas’s love for the game.
“I think I’m more into football because I can’t play regular organised, able-bodied sports,” says Thomas. “If I could kick ball, I probably wouldn’t be as into it.
“The whole reason I got interested in sports journalism was because I couldn’t play. So, I started paying attention to sports on the telly and how they put it together. I know football, I can’t play but I know football.
“If I get into sports journalism full time, I know I will never work a day in my life again – because that is not work for me, it’s my life.”
Thomas believes his perspective and experience mean he has a unique outlook and as he lists off player bios and individual moments from countless matches his knowledge and interest are undeniable.
“I never played football so I’m not going to sit here and say I know more than someone who has played- because I don’t. But at the same time because I am watching all the time, I have a different perspective. When you play you mostly know about what you did yourself, but I have a broader outlook,” he says.
Thomas got his break with Ocean FM late in 2019 when he got an opportunity to work with the sports team. On his first day in the Ocean FM studio, Thomas was given a ‘baptism of fire’ when he found himself sitting in on the Sunday sports show with Austin O’Callaghan.
Suddenly Austin announced to Thomas he would be going on air at half-time of the match they were covering.
“He gave me 15 minutes notice which was so smart really,” says Thomas, “because if he gave me a few hours’ notice I would have told him flat-out no. But the way he did it I couldn’t say no so I ended up going on completely nervous. But I must have done something right.”
He has been contributing to the show regularly ever since.
“Once I had done it, I knew – I can do this now”.
Thomas was just getting used to the ropes when the pandemic shut everything down. Now he is counting down the days until club football matches resume for 2021.
“I would love to be getting back into the studio and out covering matches. But there are so many people who lost their jobs during the pandemic and here I am just starting something, so I’ve been lucky.
“What I like about being on the radio is that no one cares that I have a disability. All they know is that I can talk about sports. I know what I’m talking about and that’s why I am there. I really like what I do and the people in Ocean FM seem to think I’m fairly handy at it. So, it’s great. My disability doesn’t matter. I’m there because I like to talk sport.”
Thomas hopes his story is helpful for other people who have a disability and are hoping to start a career.
“There’s no one-size-fits-all for disability. Everyone has to figure out their own stuff. I can tell my story but it’s my story and it is different from everyone else’s. 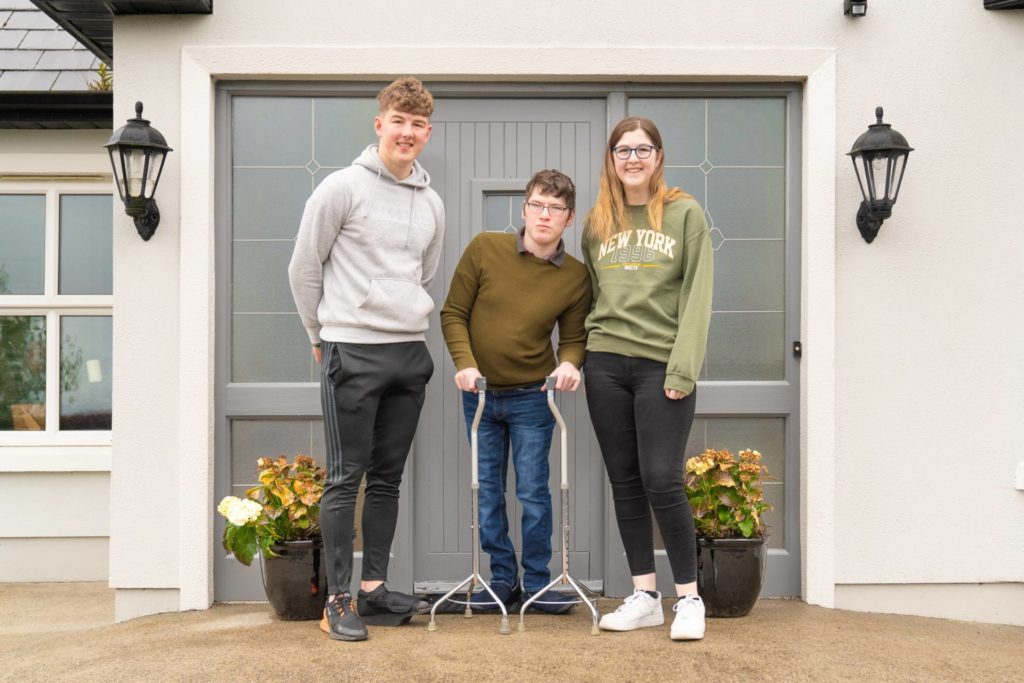 Thomas Fleming pictured with his brother Niall and sister Lucy outside their family home in Charlestown.

“The biggest advice I can give is to figure out what you want for yourself and don’t let anyone tell you otherwise,” he says.
There is help out there for people, according to Thomas.
“Living with a disability isn’t easy so try to get help wherever you can. It is there but you have to look. I would advise people to talk with the Ability Team at Irish Wheelchair Association.
“The biggest thing for me was, I knew where I wanted to end up, but I didn’t know where to start.”
Thomas says it is hard for people to look past a disability and just see a person with potential. He is hopeful in the future there will be more people with disabilities in the media reflecting Irish society.
“The only time I see people with disabilities on TV is when the Paralympics is on. There should be more people with disabilities working in the media,” he says.
“But I don’t want people to help me because of my disability. All I want is a fair crack of the whip.
“I want to have a job not because I have a disability but because I can do the job.”

For more information about the Ability Employment Programme at the Irish Wheelchair Association, contact www.iwa.ie/ability or email [email protected]