A rare and wonderful chance to showcase Mayo to the world

People from Mayo, and the West of Ireland in general, aren’t so prone to delusion that they would expect to host a World Cup final.

Even if the grand scheme of bringing the 2030 tournament to these shores comes to fruition, a scenario which at this point in time seems as likely as finding Sam Maguire outside Dublin, you can rest assured the western seaboard will remain untouched by the travelling carnival. Boris Johnson didn’t back the bid for the benefit of this rural outpost.

There will be no official tournament games in Mayo and there will be no technicoloured street parties with invaders of all accents and creeds. Games may be taking place in Dublin, but for those living three hours to the west of the capital, they may as well be in Buenos Aires or Bamako.

It’s unlikely the Olympic conveyor belt will arrive in this corner of the world either as it makes its merry way from Rio to Tokyo to Paris and beyond.

There was a brief dalliance with the thought of hosting a Rugby World Cup match in Castlebar not so long ago, when politicians and officials got prematurely giddy at the thought of hosting the quadrennial event only to be informed that our “world-class” facilities were in fact shoddy by world standards, but MacHale Park was never likely to amount to anything more than a dead-rubber game between Tonga and Namibia.

Likewise, the World Snooker Championship is unlikely to swap the traditional setting of the Crucible for the Linenhall and the uproarious World Darts Championship won’t be upping sticks from the Ally Pally for the more serene surroundings of the Beaten Path outside Claremorris.

Mayo people have made peace with these facts, knowing their unique place in the world isn’t hosting the latest major sporting jamboree to hold the interest of the globe. For the West of Ireland isn’t exactly an area of the world that lends itself to hosting major events, sporting or otherwise. These days, a sell-out crowd for a Connacht final in MacHale Park is at the more extravagant end of the scale for sports fans.

And it’s a reality that extends to neighboring counties. To a major sporting event or to Connacht, as a reincarnation of Cromwell might have said. The best the region can hope for is hosting a night of European football should Sligo Rovers and Galway United slink their way into the early rounds of the Champions League, snatching the winning lottery ticket of a tie against underperforming heavyweights from the continent. 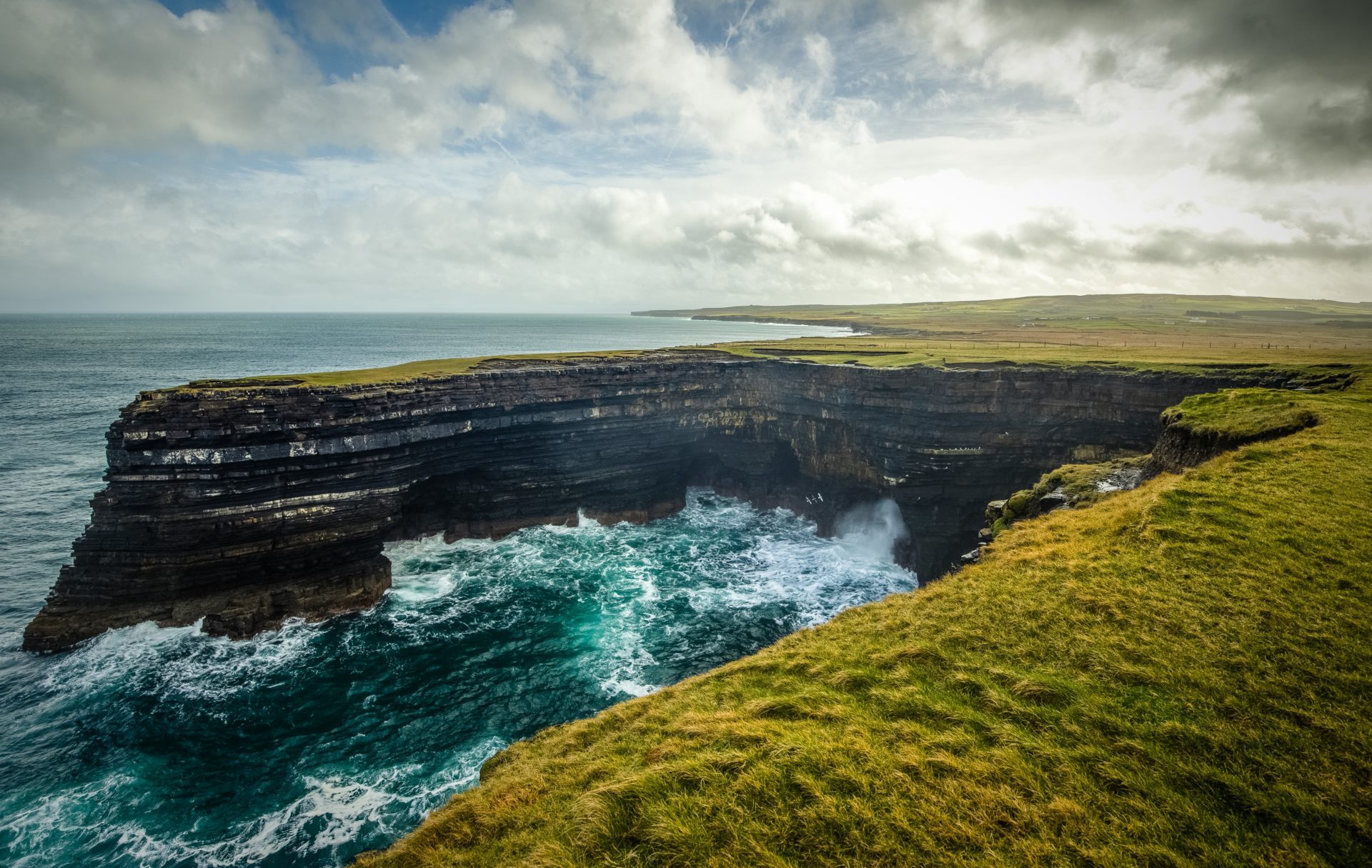 The picturesque Downpatrick Head in North Mayo, which will host the Irish leg of the 2021 Red Bull Cliff Diving World Series this September. Picture: INPHO/Laszlo Geczo

When the Volvo Ocean Race came to Galway, the local economy got the perfect boost to help it onto its feet after the economic downturn, and the city took full advantage too, knowing the event was an anomaly and that they weren’t exactly the most experienced in the realm of hosting events with a global audience.

For these very reasons, the arrival of the Red Bull Cliff Diving World Series in North Mayo is an event to be cherished in these parts.

By all means it’s a fringe sport, but it’s one that casts a spell on audiences from all corners of the globe and that will be projecting images of North Mayo’s coast, as brutally underrated as it is exposed, into homes of prospective visitors like no advertising campaigns ever could.

The cliff diving phenomenon in its current form began in 1997 when 30,000 people gathered in La Rochelle, a coastal city along the Bay of Biscay, to watch fearless athletes perform in a sporting arena that has its roots in a more ancient form from Hawaii.

The sport grew with the backing of the energy drink multinational and, in 2009, the Red Bull Cliff Diving World Series was established. It resulted in some of the greatest athletes in the game travelling to some of the most stunningly scenic backdrops known to man to perform their mesmerising series of flips and spirals.

Over the past decade, the tour has stopped off next to the Statue of Liberty and Bilbao’s Guggenheim, beneath the snow-capped Mount Fuji, along Dubai’s ultra-contemporary skyline and more.

The show eventually arrived in Ireland where it stunned spectators in Inis Mór and Dun Laoghaire, the latter attracting almost 150,000 people to the South Dublin harbour in 2019.

Dún Briste now has a chance to put on a show of its own, even if circumstances dictate we’re unlikely to see over a 100,000 crowd lining the top of the cliffs at Downpatrick Head.

The pandemic will undoubtedly have its say in that matter, as will environmental circumstances – this rustic setting is hardly designed to cater for tourists gawking out over steep cliffs to catch a glimpse of a semi-naked diver. 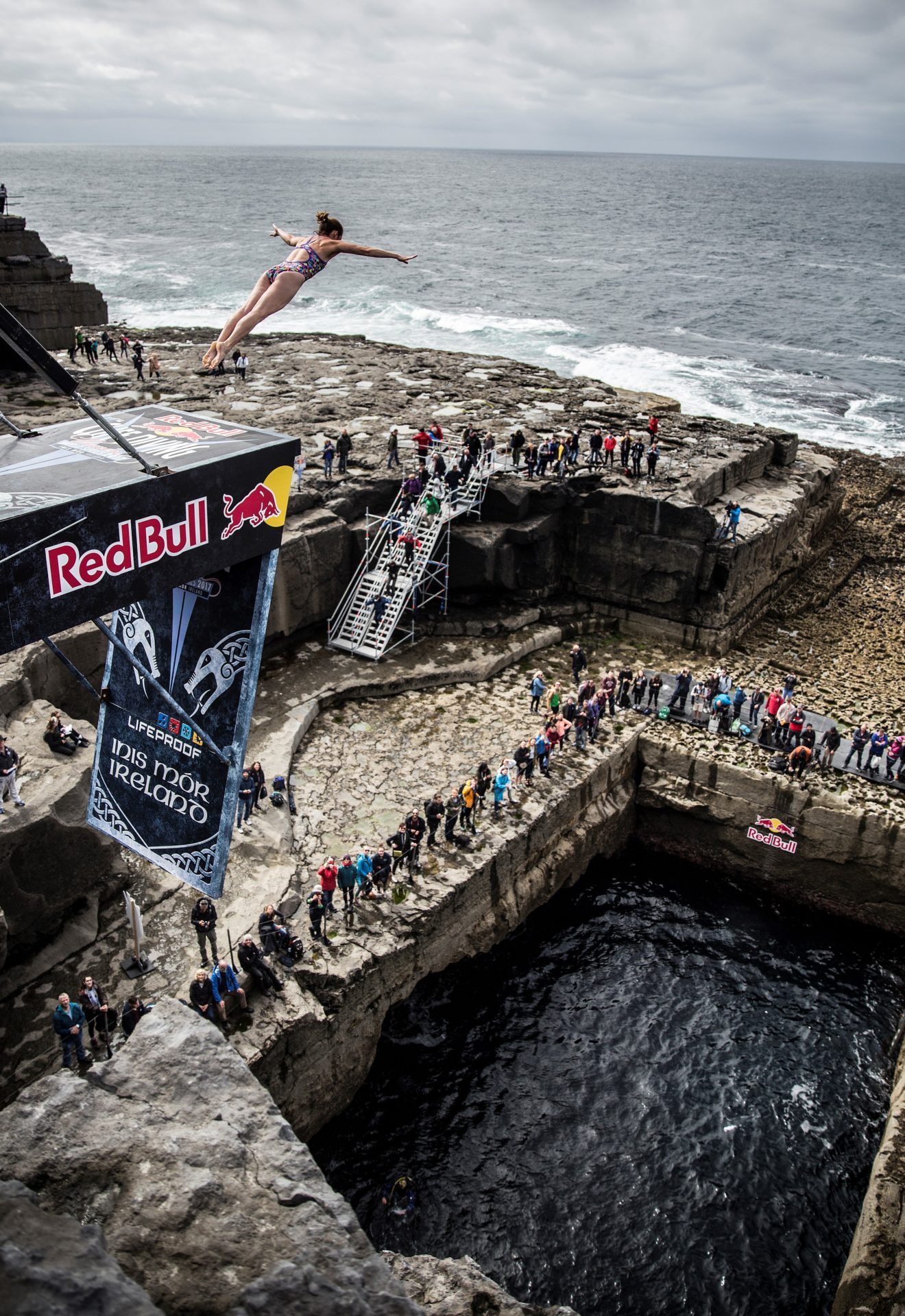 Ginger Leigh Huber of the USA dives into the Serpent’s Lair at Inis Mór during the Red Bull Cliff Diving World Series on the Aran Islands in June 2017.

But the value of the event isn’t in the physical cash tourists would bring into the locality. It’s the promotion such an event offers the region that will have a lasting effect.

Much talk is made of the value the Irish Open boasts, especially when the threat of losing its place in the European Tour calendar lingers and when world-renowned players begin turning their heads towards more extravagant events.

Having images of Ireland’s best golf courses broadcast into homes abroad, particularly in America where the appetite for golf tourism is insatiable, is a commodity not to be undervalued.

But the Irish Open doesn’t come west of the Shannon and the greatest benefit from the tournament is reaped by the likes of Antrim and Munster where the regions have been blessed by some of the best golf courses in the world. Connacht courses still benefit from the golf tourism sector, just not to the same extent.

The cliff diving event has the potential to have a similar type of effect though, giving the West of Ireland a podium it’s rarely afforded. When considering the millions who will be tuning in from around the world, either live or watching back online at some stage in the future, it has the potential to be the largest sporting event ever held in Mayo, depending on the metric through which it is viewed.

Just over a week has passed since the announcement first began to circulate and already it has begun to dissipate as the next story steps into the spotlight. It’s the way of the world; the event will return into focus as we near September 12.

Unlike the news cycle, however, the exposure an event of this magnitude brings has more permanent effects. Although it may not always be abundantly evident, North Mayo will benefit for years to come.

Don’t be surprised when you see a tanned Australia hipster wandering down Ballycastle’s Main Street in 2030, asking anyone who will listen, “Where’s the diving platform, mate?”

You’ll know why he’s there.