The Stephenites are back sucking diesel

The Ballina James Stephens hurling team who were defeated by Ballyhaunis in the Mayo SHC final of 2006 at MacHale Park. They would go on to win the county title with a final victory over Ballyhaunis a year later. Picture: David Farrell

Anyone taking a walk up by James Stephens Park in Ballina on Saturday morning might have been curious about the sound of leather meeting with ash that emanated from the old place. It’s been a while since that signature slap was heard in the North Mayo capital, at least so far as senior hurling is concerned.

But adult hurling is being tentatively shaken back into life in the town.

The Stephenites (or James Stephens, technically) have assembled a hurling team for the first time in a decade and are set to line out in their first senior match in less than three weeks’ time.

One of the men driving the rebirth of the game in Ballina is Gary Barrett, who has been appointed as the manager of the team. Barrett is a former Mayo hurler who played for Ballina for years, winning two county senior hurling titles in 1996 and 2007.

He now lives in Galway, where he works in Medtronic, but a chance conversation over lockdown prompted him to investigate whether the potential existed for the restoration of an adult hurling team in his hometown.

“I’d be friendly with Adrian Hession (Mayo hurling GPO), we talk hurling every so often and the subject came up of whether Ballina would ever field a team again,” explained Barrett this week.

“He said he could give me a list of players. They kept the underage going over the years there and he would have come across lads from Ballina at county trials for under-14 and under-16 teams.

“I said I’d try to resurrect a few old dogs myself, and between the two of us we’ll see can we get a team together. So for lockdown, I just had my list, the phone numbers and a biro, and I just text and ran lads in the evenings. Everyone seemed to be interested. Almost 90 percent of people were giving me the thumbs-up.”

Thusly was a panel pieced together, and at the club’s first adult training session in ten years last Saturday morning, 31 hurlers of various ages, shapes and sizes strapped up for action.

There are few different cohorts of players involved. The biggest group are hurlers in their late teens and early twenties who would have played for Ballina at underage but fell away when there was no adult team to progress into. Then there is a group of four or five lads with hurling backgrounds who have moved to Ballina for work.

And there are the old dogs, men who would have been involved back when Ballina was last a force at senior level in the mid-2000s.

“Lads who think they have a bit of diesel left in the tank!” as Barrett put it.

The bulk of the team are from Ballina but Barrett and his management team have also managed to pull in some players from the hinterlands (there are presently no other senior hurling clubs in all of North Mayo, after all). Players from Ardagh, Killala, Erris, Bonniconlon and Ballycastle are on board. 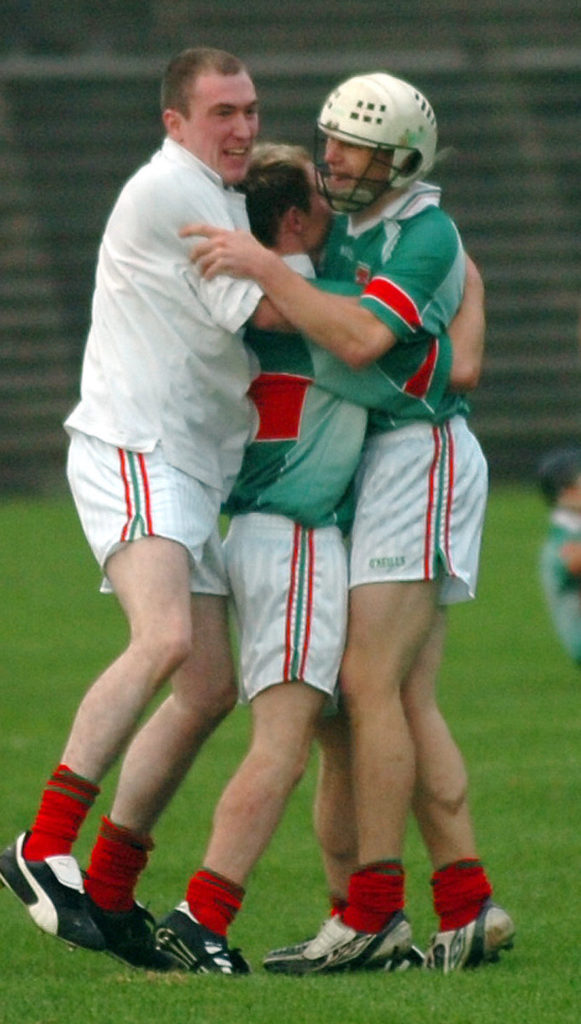 Paul Walsh celebrates with his colleagues after they clinched the Mayo senior hurling championship crown at the expense of Ballyhaunis back in 2007. Picture: David Farrell

They have also been able to bring back a group of a dozen hurlers from in and around Ballina who had been playing their club hurling with Western Gaels in Sligo.

Barrett and his brothers were key members of the team that won Ballina’s most recent county title (and third overall) in 2007, beating a Ballyhaunis side featuring Keith Higgins and current Mayo manager Derek Walsh by 0-14 to 1-10 in the final at MacHale Park.

The bonds forged by that win are still strong; two more members of that team, Kevin Healy and Paul Reape, have been travelling from Clare and Offaly respectively to help get the show on the road again.

Barrett has also assembled a strong backroom team to help him. Jamie Rooney, who has, along with the likes of Peter Dooley and club secretary Mags Downey, done tremendous work to keep hurling alive at underage level in Ballina over the last ten years, is on board, as is Noel McLoughlin, a former Ballina player who was part of the management team in 2007.

Brendan Farrell, another underage coach with the club, and Pat Armstrong, an ex-County Board chairman and local musician, are involved, as is Noel Burke, a Tipperary native originally from the storied Thurles Sarsfields club.

Their first game is down for the weekend of June 11-12. That will be in the Genfitt Senior League, which includes every senior club in the county minus their county players.

Barrett said Ballina will use the league as a building block before the start of the newly-inaugurated junior championship, which will include Ballina, Caiseal Gaels and B-teams from senior clubs Tooreen, Mitchels and possibly Ballyhaunis.

That’s set to begin in August but there’s work to be done between now and then.

“As I said to the players, we’re all individuals at the moment; nobody knows each other,” offered Barrett. “We’re not a team yet. Hopefully after a couple of games we’ll start gelling as a team and progress as much as we can.

“With the lads who came up through the ranks, it’s just continuing their game. For the lads who haven’t played in a number of years, that’s where the training comes in, to improve their first touch and their reading of the game.

“The biggest challenge will be to gel those two groups together as a team. We can only figure out how we’re doing on that when we start playing games.

“Nobody is going to be expecting miracles for the first year or two; the most important thing is to re-establish a senior hurling presence in North Mayo and to hopefully put down roots deep enough to ensure it doesn’t die off again.

“What we’re interested in this year is getting the adult team back on the map,” stated Barrett.

“There are a lot of hurling people in Ballina and there is a tradition there. It’s just a shame that it was left for so long. When I saw lads going to Western Gaels to play hurling, and young lads dropping out of the game because they didn’t have a team to play with, it was getting to me a bit. 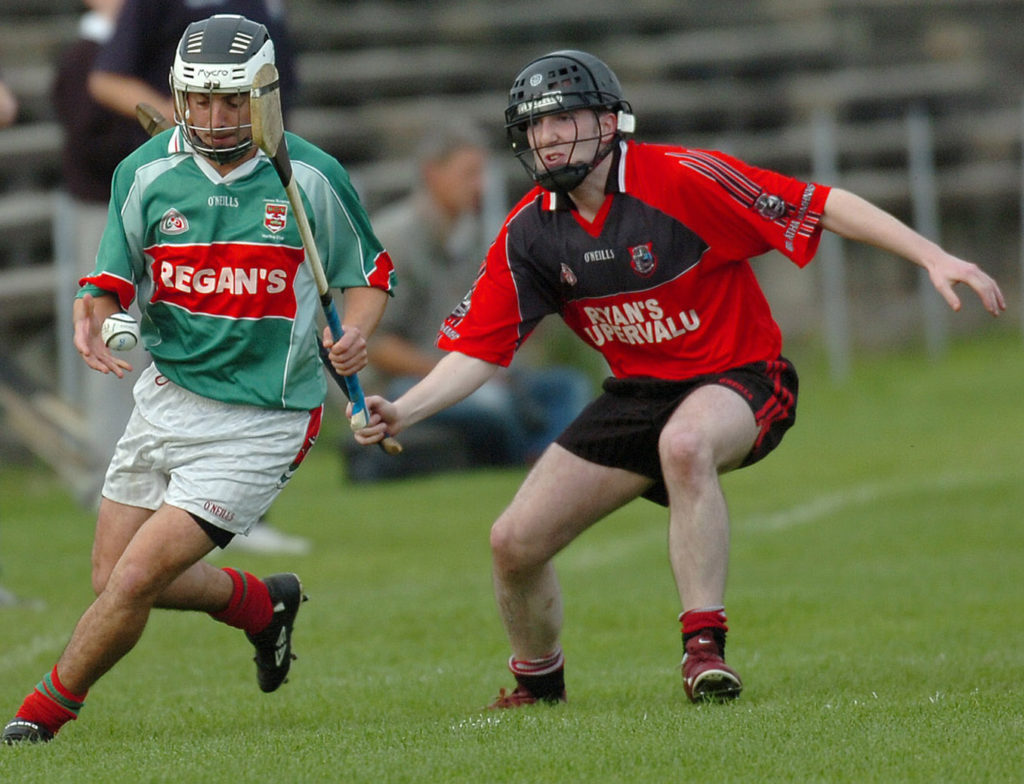 Shane Doherty of Ballina Stephenites up against Hugh Carney of Ballyhaunis during the 2007 county final.

“I love the game and I love Ballina, and you do develop a kind of band-of-brothers connection with lads, even if you don’t see them for years.

“Noelie McLoughlin would be one of those for me – we would have played together at underage for Mayo and you never lose that connection. We want to develop that into the young lads so they can have the same experience in their lives.”

Barrett said it’s “hard to put your finger on” exactly how senior hurling in the town fell away ten years ago, a decline which seems especially stark in hindsight given that county title win as recently as 2007.

The arrival of recession in 2008 and 2009 was obviously a factor (Barrett himself went to work in Hungary around the time) and by the time the alarm bells sounded, it was already too late.

“Lads moved away, lads got older, a few lads retired. The focus probably dropped a bit at underage so there was nothing really coming through,” Barrett said.

“We lost players to soccer or rugby or football just because they said: ‘what’s the point? I’ll be finished playing when I’m 17.’ Some of these lads haven’t played since they were 14 or 15, lads who are in their early twenties now.”

But they are playing again now. These are still early days and there will undoubtedly be plenty of bumps on the road before Ballina James Stephens are fully back to their former glories, but Barrett is optimistic that things are pointed back in the right direction.

And for anyone around Ballina or North Mayo interested in picking up a hurl, the gates up at the Park are wide open.

“Who knows, there might be a few more strays around the place that could come in and join us!” Barrett laughed.

“Ballina is a big-ish town, and you never know who’s married into the town.

“Everyone is welcome. We’ll never turn away a hurler.”