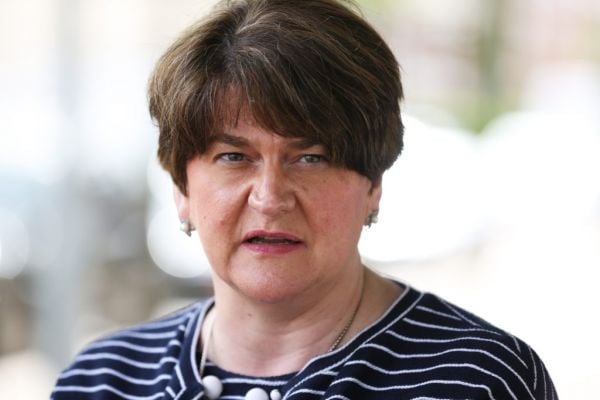 Political leaders in Northern Ireland are to contact the Taoiseach following various failed attempts to secure a meeting between the health ministers on both sides of the border.

Northern Ireland’s health minister Robin Swann said he has been unable to arrange a meeting with his Irish counterpart to discuss Covid-19, for two weeks.

The North’s First Minister Arlene Foster said discussions with the Irish Government on Covid-19 and cross-border travel is needed at a ministerial level.

Mrs Foster said she was disappointed when Stephen Donnelly said that he would send his department officials to the meeting.

Mr Swann said health officials remain concerned about infection rates in the Republic of Ireland and the slower level of vaccination, but said he hoped the country will catch up.

Mrs Foster said the lack of communication from the Irish government is a concern, particularly over the rising number of cases connected to Indian variant.

“We would like to know where that is taking place. We know in England, for example, where the hotspots are in relation to the Indian variant,” Mrs Foster added.

“We don’t know what the situation is in the Republic of Ireland. We need to have a discussion about that.

“We also need to have a discussion around cross-border travel because over these past few weeks our highest incidence is in Londonderry and Strabane, therefore we need to try and understand that.

“The only way to do that is have a meeting. We were disappointed when Stephen Donnelly came back and said that he wasn’t going to meet but his officials were going to meet. Really this requires ministerial leadership and I do hope that he reconsiders on that.”

Deputy first minister Michelle O’Neill said it is “unfortunate” Mr Donnelly has not made time to meet with his Northern Ireland counterpart.

“I think there’s a fair assessment that throughout the course of the pandemic the joined up-ness across the island hasn’t been where it should have been,” the Sinn Féin deputy leader added.

“I think it’s unfortunate that Stephen Donnelly hasn’t made time to meet with Robin Swann. I encourage that meeting to happen.

“We have engaged at different times with the Taoiseach, with the Tánaiste and others, and we will continue to do that, but I do think that we need to have health-minister-to-health-minister conversation around what is the current state of play, what can we do together?

“There are issues in border counties, so can we do more together around collective messaging?

“Ministers need to make time to make the meetings happen.”

Ms O’Neill added that the matter will be raised with Micheál Martin.

“We will do whatever needs to be done in the coming days to make sure these meetings do happen,” she added.

Mr Swann earlier told BBC Radio Ulster’s The Nolan Show that while Mr Donnelly had replied, he had “encouraged officials to meet”.

“There are several outstanding invitations for meetings between the two ministers, which Minister Donnelly has not scheduled. The relationship is not what it should be.”https://t.co/FXaTKlvR9D pic.twitter.com/mA9Lr6YPPH

“There still is concern about travel from the Republic of Ireland into Northern Ireland,” Mr Swann said.

“I had asked for a meeting with my counterpart in the Republic of Ireland to discuss this, to see what we could do jointly with regard to messaging, but unfortunately I have been unable to secure that meeting with Stephen Donnelly yet.

“It was over a fortnight ago (that the meeting was requested), now he has encouraged our officials to meet – they do anyway, they meet regularly at chief medical officer level and our public health authority level.

“We have had a response back from Stephen unfortunately saying that he would encourage our officials to meet.

“It is disappointing, I reported it back to the Executive and they expressed their disappointment as well that that was the reaction we received.

“I know there are challenges, the health service in the Republic of Ireland have had a cyber attack so I’m sure his attentions are elsewhere.

“I’ve expressed my disappointment in the past in regards to some of the supports and cross-border work, especially when it came to international travel.”

The Department of Health has been contacted for a response.

He has asked for clarity on the direct engagement between the two ministers.

“This morning we heard yet again from minister Robin Swann that the minister for health, Stephen Donnelly, has not been engaging directly with him regarding Covid-19,” he said.

“Frankly, it is alarming. This comes at a time when there are variants of concern circulating across the island despite the vaccine rollout progressing well.

“Substantial differences remain in the two rollouts, with convergence not likely for a number of months yet.

“Both jurisdictions need to be aligned in terms of messaging and in terms of restrictions insofar as they can, but that cannot happen without direct ministerial engagement and co-operation.”