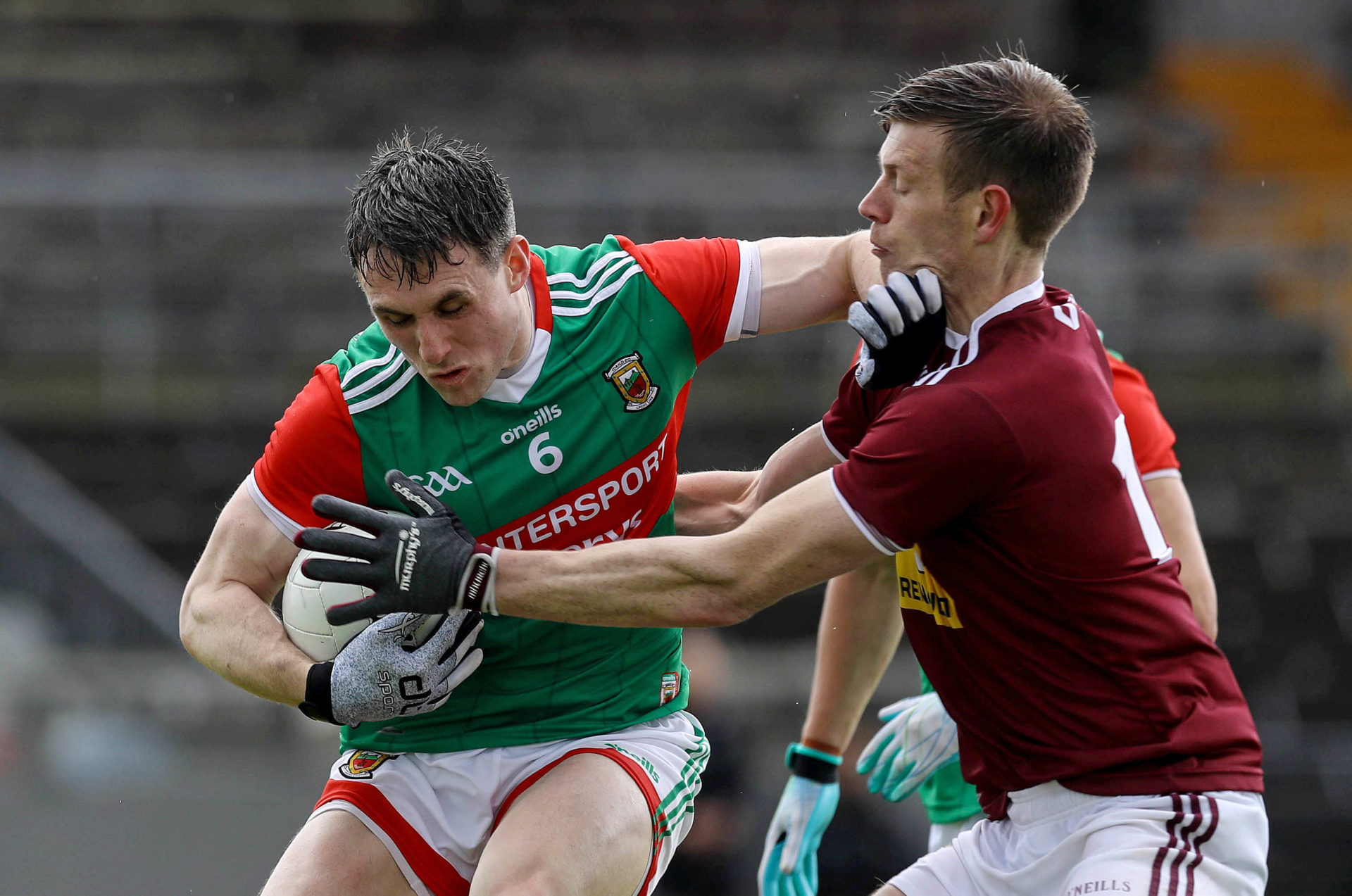 Mayo overcame a stiff test from Westmeath in Mullingar on Saturday afternoon to claim the second win of their Division 2 North campaign and all but assure themselves of a place in the league semi-finals.

James Horan’s men survived the concession of two-first goals and a black card for Diarmuid O’Connor to eventually run out three-point winners on a final scoreline of 0-21 to 2-12, at TEG Cusack Park.

Horan made a number of late changes to his starting side from last week’s win over Down, with Westport’s Ben Doyle given a league debut at corner-back and both Eoghan McLaughlin and Conor Loftus also coming in. There was also a senior debut off the bench for Kilmeena’s Jack Carney.

Westmeath began brightly and found the net inside two minutes as Ronan O’Toole’s shot came back off the post and Luke Loughlin reacted quickest to claim the rebound, round Robbie Hennelly and roll home.

But Mayo reacted well and were level at 1-1 to 0-4 by the water-break, with Eoghan McLaughlin, Conor Loftus and Paddy Durcan all finding the target. Mayo were dominating possession as Westmeath sat deep, and a couple of points in quick succession from the hard-running Mattie Ruane had the visitors two up by the 21st minute.

But Westmeath posed a threat on the break and scores from Ger Egan and talisman John Heslin had them back to within a point at 1-3 to 0-7.

The home side had their second goal of the half on 26 minutes after Diarmuid O’Connor brought down Ronan Wallace as he was about to pull the trigger. O’Connor went to the sin-bin and Heslin stroked the penalty to the right-hand corner of the net.

Mayo were back on terms within five minutes after a super score from Ryan O’Donoghue and a free from Cillian O’Connor but a couple more Heslin frees left Westmeath a point to the good, 2-5 to 0-10, at half-time.

Horan rang the changes at the interval, with Colm Boyle, Kevin McLoughlin and Bryan Walsh all entering the fray. An O’Toole mark extended Westmeath’s lead but Tommy Conroy, after a quiet first half, cut Mayo’s arrears with his first score of the game.

Conroy was unlucky not to be awarded a penalty when he appeared to be brought down by Boidu Sayeh while through on goal, but Mayo had the momentum nonetheless. A swerving O’Connor free had them back on terms and two more on either side of the second water break restored the visitors’ two-point cushion.

Mayo captain Durcan arced over a lovely point to extended the lead to three, and despite Ray Connellan pulling one back for Westmeath, a well-taken score from Bryan Walsh had Mayo three ahead once again with ten minutes to play.

But Westmeath refused to go away. Loughlin swept over two fantastic ’45s in the space of two minutes to cut the gap back to two. Substitute Kevin McLoughlin and Durcan both weighed in with good scores to keep Mayo’s breathing space intact but a super free from Heslin and a point from Kieran Martin meant Westmeath were within two points entering three minutes of injury-time.

That was back to one when Heslin swung over an effort from play, increasing his tally to 1-6. But Mayo used all their experience to see the game out, with Cillian O’Connor curling over a brilliant point from the left wing before adding an insurance point from a free. Mayo ran out three-point winners to all but assure themselves of a place in the Division 2 semi-finals.

A victory for Meath over Down on Sunday would guarantee Mayo and Meath’s progression before they meet in Round 3 in Castlebar next weekend.