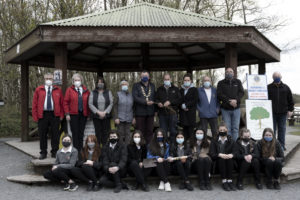 Claremorris and District Lions Club teamed up with students of St Colman’s College and Mount St Michael’s Secondary School, to plant 300 trees in community spaces, in Claremorris, to raise funds for the Lions Club Charities.

Lions’ President, James Preston explains: “Because of covid-19 restrictions, we couldn’t sell the trees this year in the normal way, so we offered them online and people responded magnificently. We asked the two secondary schools to get involved in the planting of the trees and they responded immediately. We planted the trees on two mornings in mid-April at the Racecourse Grounds and at McMahon Park. The students were terrific and are a credit to their schools, to their families and to themselves.”

Seán Heneghan of Heneghan Forestry, who donated the saplings, demonstrated to students the correct way to plant a tree. 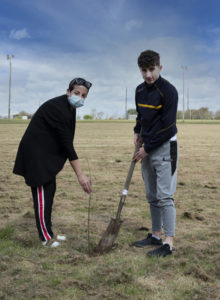 “St Colman’s College is delighted to be involved with projects like this,” according to Bronagh McLoughney, the Transition Year Co-Ordinator. “It’s good for the students to learn about, and take part in, community activities. Tree planting is such an important activity environmentally, and the experience will stand to them. It’s good for them to learn the correct way to plant trees and also become aware of the work of the Lions Club, and be involved in community activities.”

Bronagh added that St Colman’s College planted forty new trees this year along the entrance avenue to the college, during tree week.

Maureen Commons of the teaching staff of Mount St Michael, said that this was a great project to be involved in.

“The students and I were delighted to be involved in such a worthwhile project at Clare Lake/McMahon Park. It proved to be very educational and also tied in well with the Biodiversity theme we promote at Mount St Michael.”