Mayo footballers and hurlers lay Down a marker

Goals in either half from Tommy Conroy and Ryan O’Donoghue, together with an eight-point haul from placed balls by Cillian O’Connor, saw Mayo cruise to a thirteen points victory against Down in Saturday’s opening game of the 2021 Allianz National Football League. 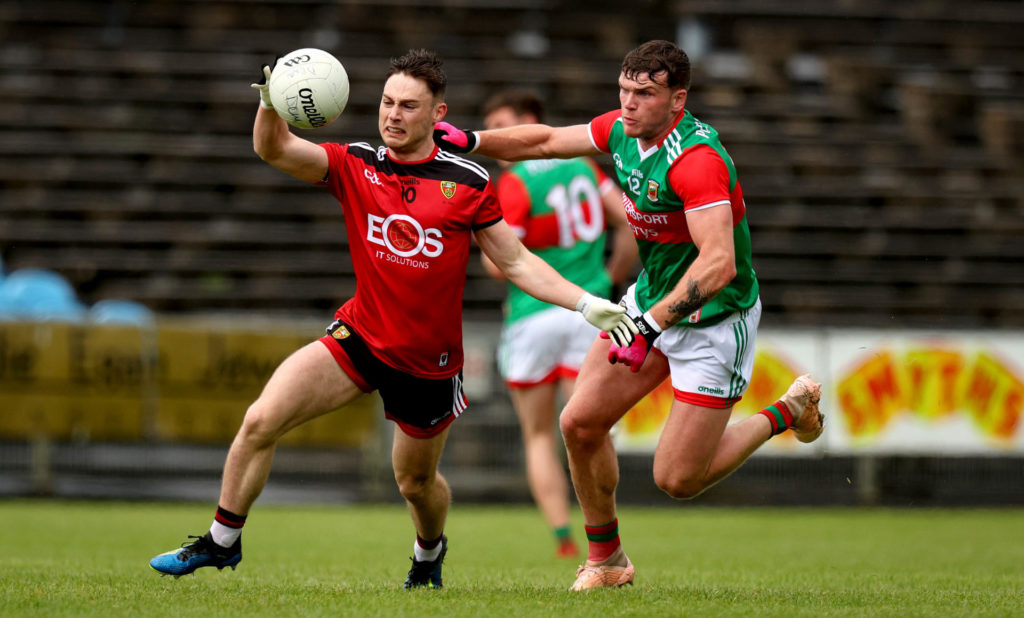 Playing in Division 2 for the first time since the 1990s, the Green and Red made light work of their Ulster visitors and were even able to give league debuts to no fewer than three players, with Knockmore’s Aidan Orme introduced after starts were given to both Garrymore’s Enda Hession and Rory Brickenden of Westport.

James Horan’s side was full value for its 2-21 to 1-11 triumph, and although the sides were deadlocked at 0-4 apiece after 13-minutes, a cracking goal one minute later by Tommy Conroy sent Mayo on their way.

Down corner-back Patrick Murdock could be forgiven if having nightmares this week about The Neale attacker, such was Conroy’s menace. He finished the game with 1-3 but after Mayo headed for the dressing-room 1-10 to 0-6 in front, it was he who also laid on Ryan O’Donoghue’s goal just six minutes after the restart – a blow from which the Mourne men were never going to recover.

The accurate Barry O’Hagan tried hard to keep Paddy Tally’s side in touch, however, the locals were able to run their impressive bench, with Orme joined on the pitch in the second half by Bryan Walsh, Eoghan McLaughlin, Conor Loftus, Stephen Coen and James McCormack. Although Down substitute Stephen McConville did smash home a 57th-minute goal for the visitors, the result was never in doubt.

O’Donoghue had added a point to his goal for Mayo, Matthew Ruane scored twice from midfield in the second half, and there were points throughout the match too for Michael Plunkett, Fionn McDonagh, Oisin Mullin, Diarmuid O’Connor (free), Jordan Flynn, Bryan Walsh and Eoghan McLaughlin.

Next up for Mayo in Division 2 North is a trip to Westmeath next Saturday.

Meanwhile, Mayo’s hurlers made a good day for the county even better, getting an away win to Roscommon in Division 2B.

A goal for the Rossies at the start of the second half brought them within three points of the visitors, but Derek Walsh’s men pushed on, claiming 1-9 in the half to see off their neighbours on a scoreline of 1-20 to 1-9. That makes it two wins from two on the back of a Round 1 success against Derry.

In the same division, Kildare’s meeting with Donegal ended 4-29 to 0-14 points in Newbridge.

Mayo duo among the goals as NUIG progress

Mayo duo among the goals as NUIG progress