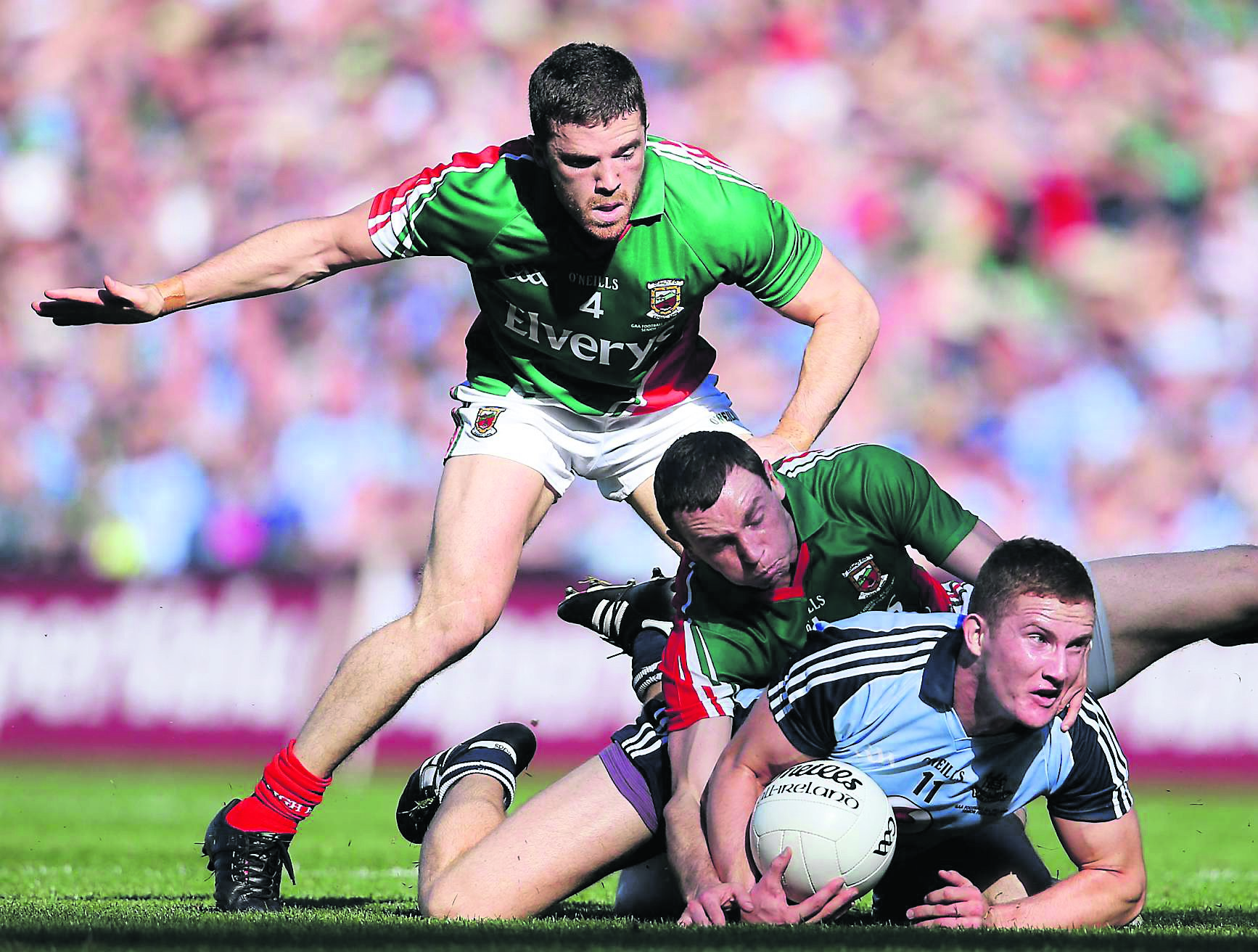 Chris Barrett and Keith Higgins tackle Ciaran Kilkenny in the 2013 All-Ireland final. “Barrett was the iron fist in a velvet glove; Higgins is the best player I have ever played with.” Picture: INPHO/Cathal Noonan

The last year has certainly proven the old adage that “the only constant in life is change.”

Although this phrase was coined by the Ancient Greek philosopher Heraticlus, it is equally applicable nowadays as the Covid-19 pandemic has seen all our lives change radically. Phenomena such as the R-rate, community transmission and contact-tracing have become part of the “new normal”. Phrases such as cocooning, social distancing and face-coverings are now part of our everyday lexicon. NPHET, CMO and WHO have replaced the GAA as the main abbreviations in our lives.

Without a ball being kicked in anger, the recent months have also seen some big developments in Mayo football. The Mayo minors, under-21s and senior ladies’ footballers will all have new management teams for the coming season. In March, it was also announced that the MacHale Park pitch will be resurfaced this summer. In the same month, Diarmuid O’Connor displayed his best blue-steel modelling pose as a new jersey was launched.

Perhaps the biggest change in Mayo football circles, however, came last January with the raft of retirement announcements which heralded the end of a glorious era in our county’s football history. Granted, we did not bring home the biggest prize but the years from 2011 to 2020 provided ample silverware and an abundance of unforgettable days. It would be remiss of me to look ahead to the new season without first acknowledging the contribution of these retirees who were some of the protagonists during a golden period in Mayo GAA.

Bernard Brogan, in his recent autobiography, colourfully described his former teammate Johnny Cooper as a ‘process-ninja’ i.e. someone who was fanatically dedicated and attuned to the process of self-improvement. Donie ‘Shoes’ Vaughan was definitely Mayo’s process-ninja since entering the Mayo panel under John O’Mahony in 2008.

He was so devoted to his craft that he would set alarms for the middle of the night to re-hydrate ahead of training or a match the following day. Alarm calls were also scheduled for the wee hours so that he could rise to eat protein-rich steak meals to help his bulking process. When entering the Mayo panel first he was a lean and lanky runner but through manic and obsessive preparation he became a powerful, rampaging, scoring wing-back.

In Tom Parsons and Seamus O’Shea, Mayo had the perfect midfield partnership whose styles really complemented one another. Tom was the charismatic, energetic mover while Seamie was a more stoic, solid enforcer. Even though both were dogged by injuries in the latter years, in their prime they were the most commanding midfield presence in Ireland. It is no coincidence that as the pair lorded land and skies in the heat of championship, Mayo were in their pomp.

Many will wonder why, after stellar 2020 seasons, David Clarke and Chris Barrett are riding off into the sunset. Apart from the obvious considerations of time and family commitments, from a purely football perspective, I think they chose the perfect time to go. Not many players can exit stage left having just given near-flawless All-Ireland final displays on the hallowed turf of Croke Park, but that is exactly what Clarke and Barrett did.

In many ways, David Clarke will be Mayo’s hardest player to replace. I surmise that, at the minimum, he was worth four points to Mayo each game. Invariably he’d make at least one brilliant one-on-one save each game in his inimitable, spread-eagle way, but how many times have we also seen him cherry-pick a high spinning ball from over the crossbar?

Around the goalmouth, he was the master of all he surveyed and I know for a fact that many attackers have thought twice about entering Clarke’s parallelogram for fear of size 12 Mizuno boots leaving their mark. The All-Ireland final last December was probably Clarke’s finest performance for Mayo. He was his usual, domineering presence between the posts, but his kick-outs were also unerring as Mayo comfortably controlled that aspect of the game.

Chris Barrett, as always, also came up trumps on the big day. I cannot remember him having a bad game when it really mattered. His performance in the All-Ireland final of 2017, when he took Paddy Andrews to the cleaners and constantly instigated Mayo counter-attacks, will go down as one of the great All Ireland final corner-back displays. I often think of the phrase “iron fist in a velvet glove” when reflecting on Chris as a player. Although barely 5 foot 10 inches, he was as physically tough and mentally focused as anyone I have ever marked, but he also had a lovely soft touch with the ball as epitomised by his excellent kick passing and shooting ability.

The retirement which really hit home with me, though, was that of my favourite ever Mayo player, Keith ‘Zippy’ Higgins. Higgins represents everything that is good about the GAA – a dual player with the most electric speed and sharp ball skills. Was there a more thrilling sight than Zippy collecting the ball on the burst and wilfully scything through defences to create another scoring opportunity? Although he was teak tough (you don’t become a top defender without being able to mind yourself), he wasn’t a souped-up, broad-backed, gym-hewn automaton that we see everywhere nowadays; ones who are there to clog up space, pass sideways or backwards and take no risks.

His game was based on the pure primal traits of fast feet, fast hands and a fast brain. His duel with Kerry’s James O’Donoghue in the All-Ireland semi-final in Limerick in 2014 was the best mano-a-mano combat I’ve witnessed on a GAA field. Two players, both at the top of their game, going directly for one another’s throat. Scintillating stuff!

What is often overlooked about Higgins, amidst the dazzling speed and movement, is his leadership skills. For the last 15 years he was almost ever-present, reliably making himself available for both footballers and hurlers and facing up to the challenge at hand, usually the opposition’s most dangerous forward. He was never the most vociferous of players but he always led by example. He captained our under-21 side to All-Ireland victory in 2006 and was the ideal choice of captain for the squad.

Three months prior to playing Cork in Ennis, we suffered a hammering from the same team in a pre-season challenge in Ballinrobe where Daniel Goulding, Cork’s prolific marksman, ran amok. Higgins was not playing that day but was detailed to mark Goulding in the showpiece affair. There was no need for any rousing speeches prior to throw-in from our captain. It was totally accepted that our leader would stifle their biggest threat so the onus was on the rest of us to fulfil our side of the bargain. He led through actions- consistent, high-quality actions. I have played with many great Mayo players for club and county, lined out alongside Michael Meehan in NUIG and Cian O’Sullivan and Michael Darragh Macauley in UCD but, without question, Keith Higgins is the best player I have ever played with.

This column, however, is not meant to be a mournful lament about the good ol’ days of Mayo football that are gone forever and will never return. In the Middle Ages, nostalgia was considered a disease and as Mayo fans we do not want to become susceptible to that affliction- I’m pretty sure Pfizer or AstraZeneca have no vaccine to treat that! It is time to look forward with hope and excitement. 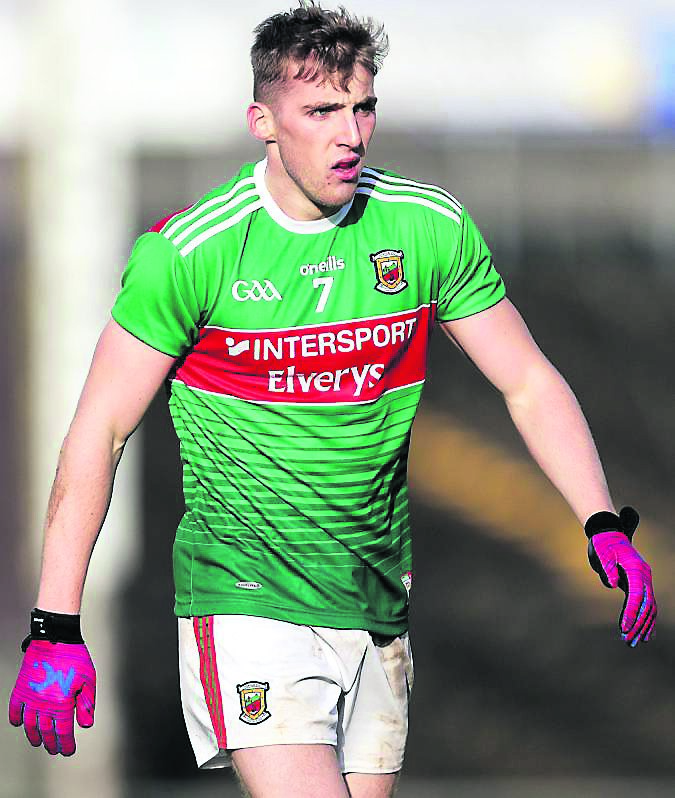 In players like Eoghan McLaughlin, Tommy Conroy and Oisin Mullin, Mayo have precocious young talents who can become leaders for the county. Picture: INPHO/Laszlo Geczo

I actually feel that, in spite of the spate of retirements mentioned above, the Mayo senior footballers are in a very good place at the dawn of a new season. A few months back James Horan did a media round with local and national publications to draw a line under 2020 and look forward to the season ahead. While he portrayed obvious disappointment at December’s All-Ireland final, the main tone I detected from his words was that of pleasant surprise and encouragement at how his squad took shape as last season progressed.

Incredibly, in Oisín Mullin, Tommy Conroy and Eoghan McLaughlin, Mayo had all three nominees for the Young Player of the Year award. I’m not sure that this has ever happened before- the most I can remember were two nominees from a single county (David Clifford and Seán O’Shea, Kerry, 2019; Ryan McHugh and Patrick McBrearty, Donegal, 2014; Jack McCaffrey and Paul Mannion, Dublin, 2013). If the three precocious Mayo lads can become as consistently high-performing as the aforementioned modern-day stars, then there will be many more good times in store.

Despite their whirlwind start to the 2020 season, as the county basked in the warm glow of the legendary Padraic Joyce’s appointment, Galway lost their impetus during lockdown and their campaign fizzled out. With some recent high-profile defections, including Ian Burke, Michael Daly and Adrian Varley, 2021 will be a season of transition for Galway. In that sense, and by blooding so many fresh and bright talents in 2020, Mayo are a year ahead of Galway in their squad rebuild and will look to defend their Connacht title and regain their impressive dominance of the province that was so evident from 2011-2015.

The last decade has provided us with many great days, souvenirs and scars but with the many changes of recent times, we are now embarking upon a new period in Mayo football. Time to make some new memories.

Be sure to pick up your copy of the Western People this Tuesday as Mark Ronaldson previews Mayo’s opening game of the National League against Down.