A poignant ceremony has taken place in Ballina to commemorate one of the most tragic incidents the town has witnessed in its long history.

A new mural and commemorative plaque in memory of local man Michael Tolan were unveiled at the former Beckett property on Barrett St yesterday afternoon. Friday, May 7. 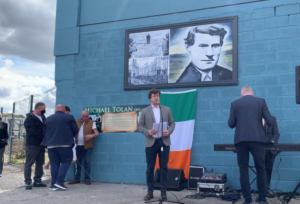 Local tenor David Lynn gives a rousing rendition of “Bring Him Home” from the musical Les Miserables as the mural of Michael Tolan is unveiled.

The event was coordinated by the local voluntary Ballina Community Clean-Up Group in conjunction with the Jackie Clarke Collection and Mayo Co Council to mark the 100th anniversary of the death of 26 year old Michael Tolan.

He was an NCO in the first battalion of the Irish Volunteers’ North Mayo Brigade and served as an intelligence officer during the War of Independence.

On April 14, 1921, Michael was arrested from his place of hiding on Shamble Street in Ballina by the British Crown Forces and on May 7 mysteriously disappeared after several weeks of horrendous treatment at the hands of his jailors.

In June of that year the mutilated and decomposed remains of a man who had been shot to death were found in pieces on a bog in Shraheens near Foxford and thereafter buried in the unmarked paupers’ plot in Leigue Cemetery.

Thanks the perseverance of Michael Tolan’s family, comrades and local solicitor PJ Ruttledge, in particular, those remains were ultimately exhumed following the truce of July 11, 1921.

A postmortem was conducted confirming what many in the town already knew – the remains were those of Michael who had been brutally murdered by his captors.

Michael was thereafter finally afforded a proper, public burial in the Republican plot in Leigue Cemetery.

The memory of his bravery and sacrifice for Irish freedom has now been “brought home” to Ballina in perpetuity thanks to yesterday’s ceremony.

The new mural, created by local artist Lesley Lackey, depicts three images of Michael – a smiling, handsome young man standing next to the Moy, the brave patriot awaiting his murder in a bog in Shraheen and his official funeral which attracted hundreds of mourners.

The memorial also features an information board, outlining Tolan’s story and a plaque featuring an emotive poem about the local hero written by David O’Malley, chairperson of the Ballina Community Clean Up Group.

Wreaths have also been laid at the site of Tolan’s murder and on his grave in Leigue Cemetery and yesterday’s ceremonies included his descendants – the Helly and Gorman families – and the descendants of many other locals that played a role in recovering his remains, laying him to rest and ultimately uncovering the truth about how he died including the Armstrong family from Shraheen, the Clarkes and Galvins from Ballina, local undertaker Gerry Ginty and local TD Dara Calleary.

“This shouldn’t be about hatred or rivalry or forgiveness. It should be about loving thy neighbour. That is what brings law together and what brings communities together.”