Anglers who may catch salmon with suspected Red Skin Disease (RSD)  are being advised not to to remove the fish from the water.

A statement to this effect has just been issued to the Western People by Inland Fisheries Ireland (IFI)  following reports of salmon catches showing signs of RSD in the River Deel last week. 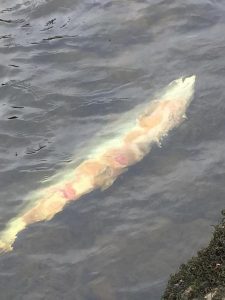 IFI confirmed that it has received reports of  individual fresh-run wild salmon with signs of the disease having been encountered in the River Deel in Mayo’s Moy catchment.

It says leaving the salmon in the water will help control matters until the cause of the disease has been determined and the risk of it spreading established.

Salmon affected by RSD have a characteristic red-spotted rash on their underbelly and may appear lethargic or moribund, the IFI explained.

The rash can either be localised or extend along some or most the length of the fish.

As the disease progresses, skin lesions, signs of bleeding and skins ulcers can develop primarily along the belly area and extend to the head and tail.

Secondary fungal infection can further develop which may ultimately result in death of the salmon.

IFI is appealing to anglers to forward any reports of salmon with signs of RSD along with photographs and an estimate of fish weight to [email protected]ie or to call the IFI’s 24 hour confidential hotline number on 1890 34 74 24 or 1890 FISH 24.

Anglers who capture such salmon are advised to follow normal biosecurity procedures and disinfect tackle, waders and equipment.

Until the cause of the disease has been determined and the risk of spreading the disease established, affected salmon should not be removed from the water.