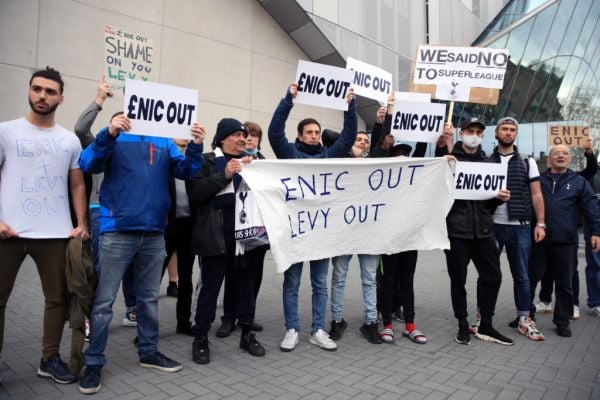 Tottenham Hotspur Supporters’ Trust has rejected the opportunity for a meeting with club chairman Daniel Levy in the wake of the European Super League storm and reiterated the call for the board to resign.

Spurs were one of six Premier League teams to sign up for the ill-fated breakaway league, but were quickly forced to withdraw 48 hours later after significant backlash from fans, politicians and even royalty.

Over 90 per cent of THST members last month backed a motion for the club’s executive board to resign following Spurs’ involvement while also laying out plans for a protest at the final home game of the season against Aston Villa.

Liverpool’s Spirit of Shankly supporters group has taken the opportunity to meet with the Reds’ board this week, but THST does not want to engage with Levy at the current time.

“While we are continuing to work with club staff to ensure fans’ interests are taken into account on such issues as ticketing and the return of supporters to grounds, there has been no communication with the club’s board,” a statement read.

“Part-owner Daniel Levy has offered a full board-to-board meeting, but we have made it clear that business as usual is not an option.

“We want to meet with the club’s owners, and to clearly establish the basis for any meeting before it takes place.”

The trust has compiled a six-point plan they want to see actioned to lead the club into a “new era”.

The manifesto includes replacing the current executive board as a way of the club distancing itself from the ESL, the current board paying any fines as a result of their involvement in the breakaway, the club committing to fan consultation over none footballing matters and restructuring to a share ownership that would allow outside investment.

“We must do more than just voice our opposition to the current board and ownership,” the statement added. “This six-point plan gives supporters of Tottenham Hotspur something to unite behind, and a clear objective. It proposes solutions that are achievable.

“We invite the club’s owners to meet with us to implement the six-point plan above. We believe successfully making these changes will enable us to secure the future for the club and the game that we all want to see.”