A number of vehicles have been detained by An Garda Siochana as part of a road traffic operation that is being undertaken in the Claremorris area this weekend.

The operation has been undertaken by the Mayo Roads Policing Unit and gardaí from the Claremorris Community Engagement Area. 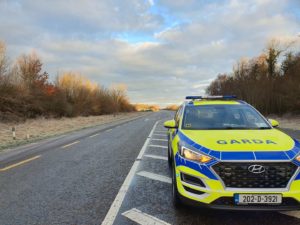 It began last Friday and and has involved the establishment of various checkpoints targeting road traffic offences such as speeding and use of uninsured or untaxed vehicles.

Similar operations have been conducted previously in other parts of the county.

A garda spokesperson told the Western People that a number of vehicles have been detained as part of the operation and that fines and enforcements have been taken in relation to various offences under the Road Traffic Act including speeding.