Sea trout catches are starting to feature in angling reports from around Mayo with two anglers reporting six catches on the Moy Estuary last week, according to latest reports from Inland Fisheries Ireland (IFI).

The trout were caught downstream of the “Castle” on sand eels and are early catches, given that the trout season on that body of water only began on April 17.

Some sea trout were also reported caught at Lacken Strand and along Ross Beach – similarly on sand eels.

Further upstream water levels on the Ridge Pool were approaching perfect conditions for fly angling in the week that ended April 25.

Ballina Salmon Anglers reported 1 salmon caught for that week. This was the biggest salmon of the year so far and was caught by Derek Harrison, Ballina, for 14.5 lbs. The fish was caught on a worm just above the weirs. 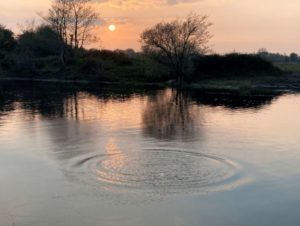 Sunset on the River Deel.

The River Deel, the biggest of the Moy catchment tributaries, needs water to encourage salmon to move and the next rise in water levels should see a lot more anglers out in search of a springer.

But there is concern for this river following the appearance of salmon catches with suspected red skin disease – a condition characterised by a red-spotted rash on the salmon’s underbelly and an apparent lethargy in the fish.

A statement on the matter is awaited from IFI.

Sunny weather throughout the week deterred a lot of anglers from taking to Lough Conn but those who did had good results, particularly with sinking lines.

Thirty-one trout were reported overall with most fish returned alive.

Padraig Traynor had three to the boat, the best of which weighed 1.5 lbs. – all taken on dabblers.

With the 2021 season nearly at the half way mark, Inland Fisheries Ireland is concerned at the high number of 2020 logbooks and unused gill tags yet to be returned and is appealing to anglers who have yet to submit them to please do so immediately.