A Ballina councillor has called for an update on the plans to upgrade the N58 connection between Foxford and Ballyvary, claiming the existing route is like a cattle crush.

He noted that the proposed project has been packaged along with the N5 upgrade between Castlebar and Westport with the aim of linking the county’s three main towns but that there has been very little mention of the N58 element, leaving Ballina out on its own. 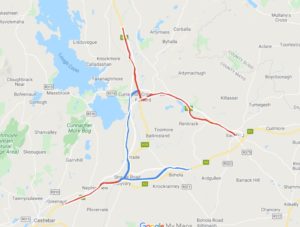 The N58 is one of three proposed road upgrades geared at improving accessibility between the Mayo towns of Ballina, Castlebar and Westport.

“I want an answer from the county manager on this and for it to be raised at the next full meeting of the county council,” Cllr O’Hara said, urging that local TD, Deputy Dara Calleary should also pursue the issue.

Cllr Jarlath Munnelly agreed, stating that the N58 and proposed orbital route for Ballina are the two most important projects for the town:

“What Ballina needs is to be able to get smoothly to the N5 without having to go through any towns, he said.

Cllr Mark Duffy said the N26 should remain a priority for Ballina, followed by the N58 whose daily traffic movements are only slightly lower than those on the €240m N5 between Castlebar and Westport.

“It’s vitally important from the Ballina and north Mayo perspective that the Foxford to Ballina road be upgraded to a national standard and that it then veers off to Ballyvary to connect with the dual carriageway,” he said.

Cllr Seamus Weir also spoke in support of the notice of motion while Mr Tom Gilligan, director of services for the Ballina Municipal District, agreed that the N58 project has to be a priority.