The developers of the Oweninny windfarm say they have conducted a full assessment of their project to ensure it will not impact telecommunications locally.

The company told the Western People that its assessment takes full consideration of telecommunications links on, or adjacent to, the site in the Bellacorick area of north Mayo and included consultation with telecommunications companies regarding planned works on phase one and two of the development.

Oweninny Power DAC was responding to claims that the operation of its turbines will impact both voice and data communications locally. 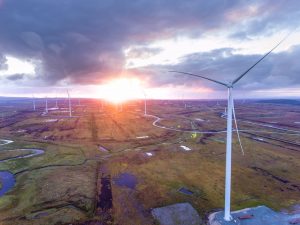 Aerial shot of the Oweninny wind farm site at dawn.

A reader contacted the Western People to say that a 2009 report by the UK regulator, OFCOM, on a test of a 17-turbine development, found its cumulative effect on telecommunications to be significant.

He noted that a number of north Mayo communities will be surrounded by the 112 much larger turbines of the Oweninny windfarm, when its development is complete.

The Department of Housing, Local Government, and Heritage (DHLGH) is responsible for planning policy for wind-energy developments.

A department spokesperson told the Western People that potential issues regarding impacts on telecommunications services are matters to be addressed between the windfarm promoter and telecommunications companies providing services in the area concerned.

“Oweninny Power DAC can confirm that advance contact was made with telecommunications companies regarding our planned works for Oweninny Wind Farm Phase 1 and 2.

“Should residents wish to outline specific concerns to the project team, they are more than welcome to do so by emailing [email protected] or by contacting our dedicated community liaison officer,” the spokesperson concluded.