Deel me in: Jordan reflects on ’01 glory 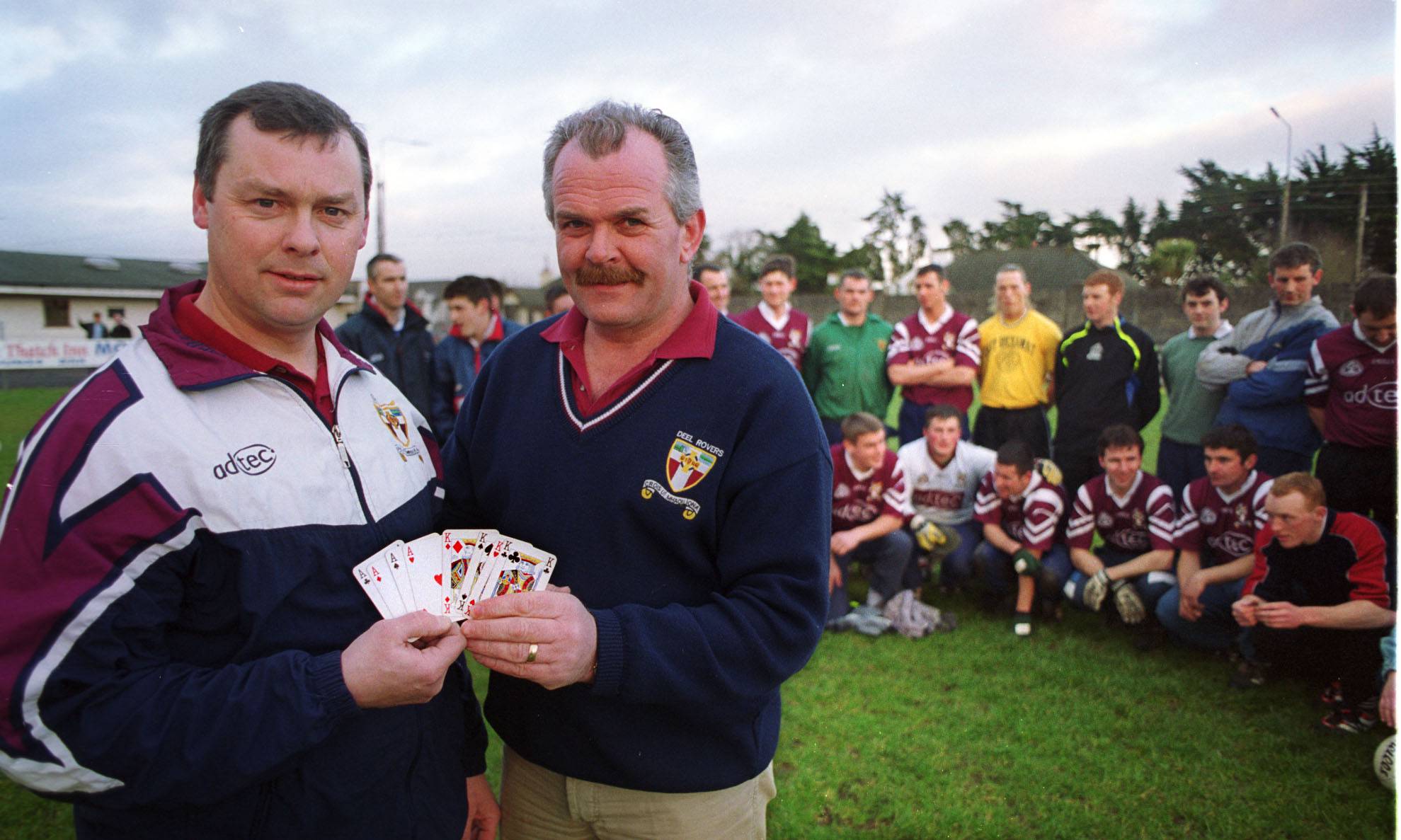 Crossmolina team manager Tommy Jordan and club chairman Michael O’Malley were hoping to have all the aces in their pack ahead of their side’s attempt to become Kings of Ireland. Western People photographer Henry Wills snapped the squad ahead of the All-Ireland Club SFC final on Easter Monday 2001.

When Tommy Jordan arrived back to his hometown of Crossmolina in 1996, after a period spent living and working in Limerick, he could hardly have anticipated stepping in at the ground floor of a glorious era for the town’s Deel Rovers, an era in which he himself would play a principal role.

Jordan took over the club’s senior team in late 1998 and the following year, in his first full season as manager, led Deel Rovers to their third-ever Mayo senior championship and a first-ever Connacht title. 12 months on, they retained their county and provincial crowns before advancing all the way to the All-Ireland final, where they overcame Nemo Rangers of Cork to become the first Mayo club to lift the Andy Merrigan Cup.

Jordan took a call from the Western People last Friday morning, exactly 20 years to the day since he led his hometown club to the top of the mountain. Speaking about that day, that year and that remarkable crop of players, Jordan very modestly casts himself as simply the right man, in the right place, at the right time.

“Those lads had come up in two or three different groups and had been successful at underage. I was fortunate enough to come on the scene when they were reaching their maturity,” he says.

“It was just the way the dice rolled; I just happened to become involved at that time, it probably could have been anybody.”

The story of the 2001 All-Ireland win seems to begin in earnest just over a year earlier, when Crossmolina, as newly-minted Connacht champions, lost an All-Ireland semi-final they probably should have won to Na Fianna of Dublin.

Rather than stew on the defeat, Jordan and his coaches wasted no time in regearing their players for another shot at the title.

“We would have felt that we didn’t perform. We didn’t do ourselves justice,” he offers of the loss to Na Fianna.

“We didn’t hang about after that game; things were put in place almost immediately for an assault on the following year.

“To have won the county was a massive achievement, and to have won Connacht for the first time meant we were going into a territory that we weren’t familiar with. And as will sometimes happen, it just didn’t go for us on the day.

“But it galvanized us. We got back to work almost immediately. We had a meeting the following week and everyone decided that everyone was happy with everyone and we said we’d go at it again the following year.”

The details of the 2000-2001 campaign are well known at this point. There was the narrow escape from a calamitous Round 1 loss to West Mayo (“It’s the one game I do often think about,” says Jordan. “If that game had gone against us, this conversation wouldn’t be happening!”). There were the wins over Swinford and Moy Davitts to arrive in a county final against Burrishoole (“An excellent side,” says Jordan) and a spin through Connacht to end up in a provincial final against Corofin at St Tiernan’s Park.

“Corofin were the team people were aspiring to beat,” recalls Jordan of the Galway champions. “They might have been coming off the boil a little bit by the time they came to us but they were still a formidable outfit.

“We beat them convincingly enough the same day, it wasn’t a nail-biter. That was pleasing. You knew you were in with a chance against anybody by that stage.”

Victory there meant the Connacht title remained on Deelside for a second successive Christmas, and early in the new year Crossmolina were drawn against Derry and Ulster champions Bellaghy in an All-Ireland semi-final. The game was fixed for Brewster Park, Enniskillen, home of the Fermanagh footballers, who just so happened to be managed by a man from Crossmolina, John Maughan.

So Jordan reached out to his neighbour and set up a challenge game, both to sharpen his players for the semi-final and to get them accustomed to the Brewster surface. On the morning of the match, however, conditions in Enniskillen were not ideal.

“Technology wasn’t as advanced then – everyone didn’t have a mobile stuck to their hand,” says Jordan.

“It was a lovely morning here when we set off but from Sligo down, there was quite a bit of frost. John thought someone up in Brewster Park would have contacted us and they obviously thought John would have done it, and between the jigs and the reels, seven or eight carloads of us ended up there with the pitch frozen and no team to play us!”

Such was their focus at the time, the Cross’ players were back at St Tiernan’s Park and togged for a training session by 3 o’clock the same afternoon.

Bellaghy were beaten and Crossmolina marched on to face the mighty Nemo in the All-Ireland final at Croke Park. While his right-hand man Jarlath Cunningham kept the players on their toes over what turned out to be a two-month wait for the final (due to Foot and Mouth), Jordan turned over every stone to give his team the best possible chance of success.

On the advice of James Nallen, who had stayed there before Mayo’s All-Irelands in 1996 and 1997, Maynooth College was booked as the team’s pre-game base. Jordan also wisely put local rivalries to one side to hoover up any nuggets he could find from neighbours who had walked the road before.

“You were trying to get tips and hints on how to do things. I would have talked to Noel O’Dowd in Ballina and to Eamon Clarke in Knockmore about how they had done things the years they went up. They were very helpful, with what they felt they might have done differently,” he recalls.

The digs in Maynooth, in the actual seminary itself, might have been an unorthodox base but it proved an ideal one.

“I don’t know would you get fellas into it now,” laughs Jordan. “But we had a nice relaxed evening. A lot of thought and preparation went into it. The one thing that had caught us out was our departure from Crossmolina; we didn’t expect the amount of people that came out to give us a send-off.”

As for the game itself, Crossmolina were three points behind at half-time (“We could have been down more, only for a few great saves from Barry,” says Jordan) but he, Cunningham, Michael Moore and Padraic Syron kept things cool at the interval, stating calmly that they were half a yard off the pace and asking for more. 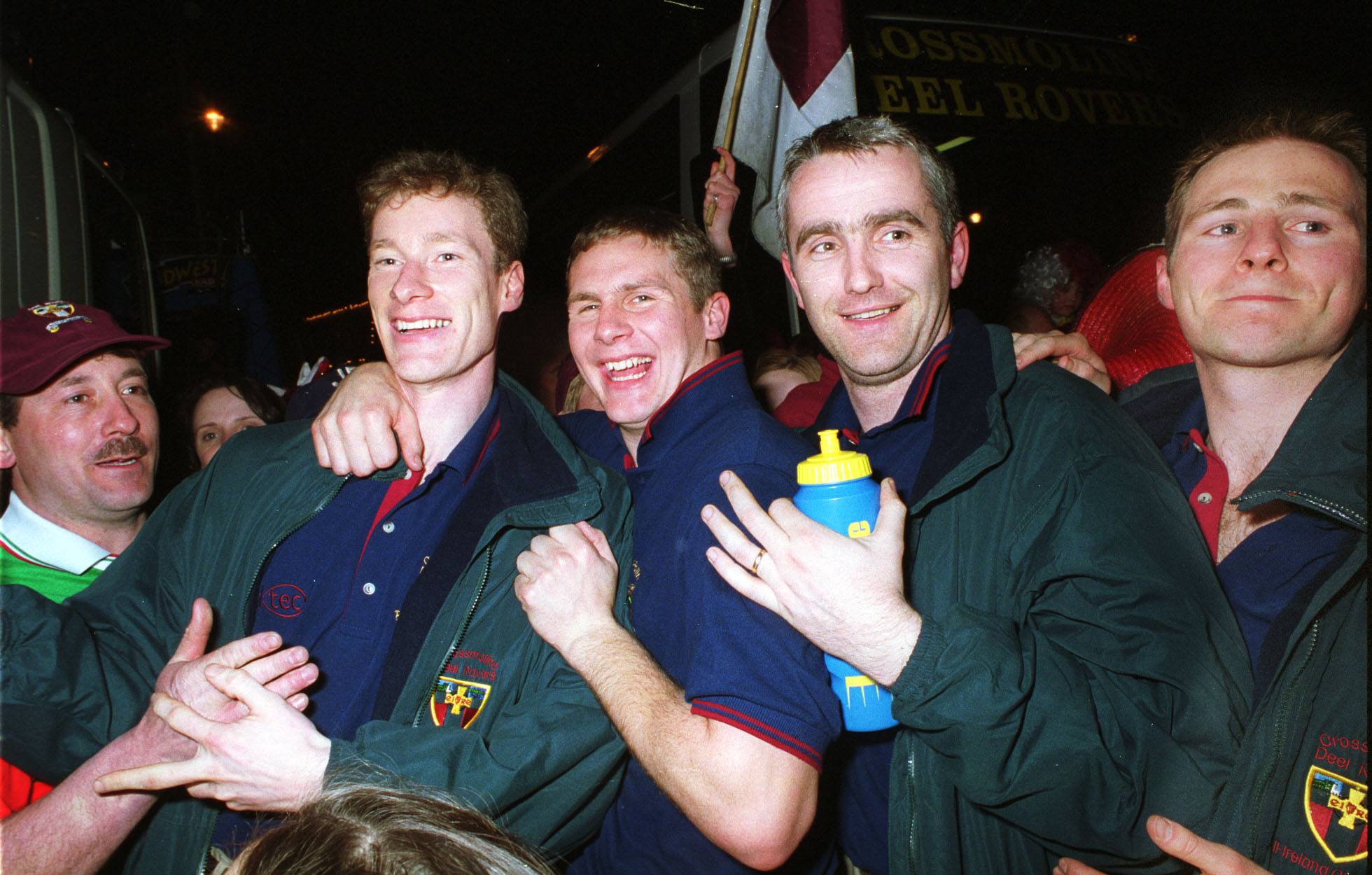 “Jimmy Nallen made the point before we went out. ‘This is our chance,’ he said. ‘We might never get this chance again.’

“We knew we hadn’t played anywhere near as well as we could in the first half, and to be fair, fellas responded, they went out and they did it in the second half,” he says.

Crossmolina stormed back into the lead. A late goal from Colm Corkery cut the gap back to one but the Mayo men had done enough to make their own piece of history.

“We had everything planned up until the final whistle, but we had very little planned for after that,” recalls Jordan.

“That time they were building the new Hogan Stand, so all the crowd was in the Cusack Stand and the presentation was made on the pitch in front of the Cusack. To be able to walk along the sideline there with the cup and see all the supporters there beside you, that was a moment that would stick with you.”

Jordan remained at the helm through the rest of Crossmolina’s golden era, winning three more Moclair Cups in 2002, 2005 and 2006 and another Connacht title in 2002 before Nemo took their revenge in the All-Ireland of 2003. He and Cunningham subsequently went on to manage Sligo for the 2008 season. He currently serves as the Deel Rovers chairman.