Captain Nallen recalls the romance of 2001 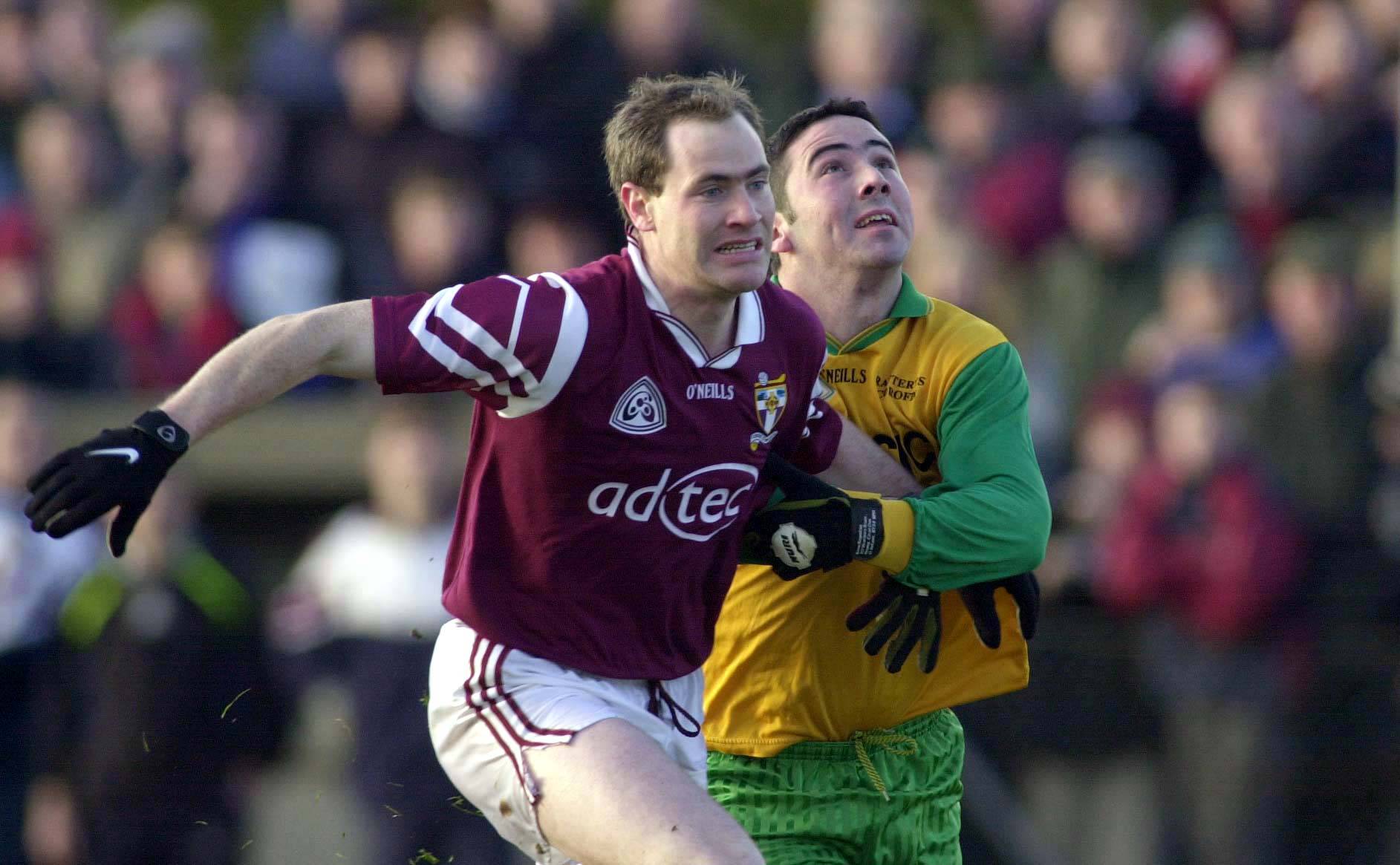 So, you played on the first team from Mayo to ever win the All-Ireland Club title. But more than that, you were the captain, the man immortalised in photograph as lifting the Andy Merrigan Cup on the most hallowed ground of all. On behalf of your club. On behalf of your county. And it’s not as if you had beaten just any team, only the most successful in the history of the competition. Seven times Nemo Rangers had appeared in the final; six times they were victorious. But not this day. No, this was your day. This was Crossmolina’s day.

And yet it would take Tom Nallen a full 10 years before he could even bring himself to watch a video of his greatest achievement. Why? Because he wasn’t happy with how he played. Still isn’t.

If any anecdote can explain the secret to Crossmolina’s success of the late 90s, early noughties, perhaps it’s that. Nallen and co didn’t just take great exception to losing a game – it was an affront to even come second best to a ball. And that was only at training.

“That was the way we rolled back then,” reflects the captain, some 20 years on. “We were a pretty strong-minded group and numerous guys come to mind who wanted to set their own standard, as a player and then as a team, and see where that could take us. Some of our hardest challenges were against teammates.”

Thousands have trotted out that line but with Nallen you just know he’s talking the truth. Close familial bonds were fuel whenever the troops gathered around in St Tiernan’s Park.

“When Tom and James go for a ball and either Tom or James isn’t happy at what’s happened, there’s an honesty that can come out, the whole group gets to share in that experience,” says Tom.

James hardly needs an introduction, except to say he’s older than Tom and John who were among several sets of brothers in the squad, the Costellos, Heffernans and Lavelles included. Oh, and that he was one of a handful of Crossmolina players who ranked among the very best in the country. But from a list that included James Nallen, Ciaran McDonald, Michael Moyles and Peadar Gardiner, it’s not every GAA whizz who would be able to correctly name the only Crossmolina player who 13 days after their All-Ireland Club triumph, started for Mayo in their National Football League Division 1 final against Galway.

Two national senior titles won in the space of two weeks in Croke Park, Tom Nallen often had worse fortnights – like the one fourteen months earlier when a viral infection picked up during surgery forced him to miss Crossmolina’s All-Ireland semi-final against the Dublin and Leinster champions Na Fianna. The teams were all square at the halfway stage but the Mayo men, with a stiff wind at their backs, misfired badly in the second half to the extent that they scored only one point. And even that was from a free. The team meeting which took place a week or so later has gone down in local lore. Confessions were heard, minus the holy water.

“We were having a reflection, if I could put it that way, probably with a few 7 Ups in front of us,” Tom Nallen remembers. If there was 7 Up, you’d bet it was only as a mixer.

“We were really unhappy with how that campaign ended and we put the burden on ourselves to address that and not become a team that might reflect on what we could have achieved.

“Ethos and culture, they’re nice words but what our group really had was a great honesty. That’s a hard thing to achieve without it becoming too personal or negative but if everyone feels as if we should do better then the next question is, what are we going to do about it?

“I know I had many an honest conversation with Tommy J and Jarlath Cunningham and they were looking for those inches as well, which was great.

“They knew they had a hungry bunch of players and it wasn’t so much them trying to drive us, we were the ones with the ambition and they were the ones asking ‘well how are you going to do it?’”

In truth, there was little rocket science involved. If a player arrived five minutes late for training, he didn’t make that mistake again. If a player thought he had trained hard, he usually discovered what hard was the next night. And yet for all their determination to atone for the bitter disappointment of losing to Na Fianna in February, the legs were very nearly whipped from Crossmolina’s renewed bid for All-Ireland glory as soon as the first round of the Mayo senior football championship rolled around four months later.

An amalgamation of junior footballers from Islandeady, Kilmeena and Achill, playing under the banner of West Mayo, were in the scarcely believable position of leading the defending county and Connacht champions by four points with only five minutes of the game in Islandeady remaining. It’s hard now to quantify the importance of a 56th minute equalising goal by Paul McGuinness, which triggered a flurry of late points from wing-back turned attacker Gerard O’Malley and Ciaran McDonald. Instead of what would have ranked high among the county championship’s greatest shocks, in the blink of an eye West Mayo had managed to lose by the margin by which they had led.

Even now Tom Nallen refuses to offer complacency as an excuse.

“That was back when championship football was knock-out so we went into it with eyes wide open. They just hit the ground running. We were playing in an unfamiliar ground and credit to them they had their homework done. My own man beat me for a goal early on and when they got their nose ahead they managed to keep building on that.

“I can tell you, with the clock winding down there was definitely an air of panic, it just wasn’t coming together. Pure perseverance and good fortune got us over the line. It was a chastening experience and really cleansed the soul of any ambition we had for a while after that, but in a good way.”

It would actually take until the All-Ireland final itself, some 10 months later, for another team to score more against Crossmolina than what West Mayo did on that dramatic Friday evening in June 2000. But Nemo Rangers, too, were also to come up short against the Deelside outfit who became the fifth Mayo club to appear – and the first to be successful – in the final of the All-Ireland Club senior championship.

“It’s a bit like a romance you had as a younger man; the memories get fonder the further they are in the past,” laughs Tom Nallen now.

“It’s the GAA competition that takes longest to win and if you look at the type of club we’re from and what we represent, rural-based where football means something to the community, it was great to finally go and do it.

“We had been around when Castlebar and Knockmore and Ballina had come so close and we knew these guys were made of flesh and blood and bruised in games as well. We felt if they could go that far then perhaps we could as well. It made it all the more real and tangible. It wasn’t just an idea.

“The further from it, the more I realise how special and hard-won it was,” he admits.

Based on the East coast for the past 24 years and living in Stillorgan, Tom Nallen had in January 2001 just started a job with Allianz Insurance, with whom he is now Head of Distribution and Sales of Commercial Business, when, if truth be known, most of his focus was on an impending showdown with Derry and Ulster champions Bellaghy, in Enniskillen, in the All-Ireland semi-final.

The full-back played with the aid of several injections into a shoulder so painful he could barely raise an arm above his head. Talisman Ciaran McDonald was unable to start having broken a bone in his foot on the team holiday. And behind all that was the fact Bellaghy were a seasoned, street-smart operative who had reached the final six years previous.

“I think that game was our watershed moment. We were very lucky to be back in the same position as the year before and to have that chance to address the things we had said we wished we could have relived.”

What was to quickly emerge following that game, however, was that the All-Ireland final would not take place in its traditional St Patrick’s Day slot due to the outbreak of Foot and Mouth disease. And it worked to Crossmolina’s advantage that the match would instead take place on April 16, as that allowed Nallen, McDonald and one or two others to heal properly in time for the greatest challenge their club had ever faced.

“I could relive every minute of the final,” Tom Nallen readily admits. The last one is still his most vivid. Crossmolina were four points in front having thrown off the shackles after a below-par first-half display.

“We were in control and I can probably say this now, I had a moment of realisation where I felt we were there, it felt like it was going to be our day. But somehow a ball went through a very congested defence and managed to find its way to our net. And then either myself or Stephen (Rochford (It was you Tom!)) sought the short kick-out from Barry and stepped inside the 21-yard line and referee John Bannon blew the whistle. I nearly threw up in my mouth at that stage.

“I don’t know who went up for that final throw-in, I just know the ball ended up in Gerry O’Malley’s hands. I think he made it back from the Lebanon just to catch that one ball.”

The whistle blew once more. Crossmolina had won a match by one point in which they had trailed by three at half-time.

“We were lucky, Barry Heffernan pulled off a couple of fine saves that had he not, could possibly have taken the game beyond our ability to win.

“I think my own brother James, who’s not known as a man to give an oration, as someone who had been in Croke Park dressing-rooms in those situations, he said he didn’t want to be talking about what we could or should have done and reminded everyone we had a chance to do something about it there and then. That’s what we resolved to do.

“Sometimes you resolve to do something and you still can’t affect it but we definitely had a single-mindedness when we went out in the second half and just made less errors.

“It was a great moment when that whistle finally blew.”

If Tom Nallen is still able to relive every minute of that match, the hours and days afterwards are probably a bit hazier. But the “unreal” experience of returning to a town whose streets were thronged with thousands of well-wishers from all clubs and corners of the county left the captain totally certain of one thing.

“If Mayo win an All-Ireland there’ll be a loss of life in trying to celebrate it.”

And some will say it’ll still have been worth it.

*This interview, and others with Michael Moyles, Tommy Jordan and Gerry O’Malley, appears in a special supplement commemorating Crossmolina’s All-Ireland victory of 2001, available with this week’s Western People.