No reprieve from closure plans for south Sligo banks

Bank of Ireland has confirmed that it will also be removing its ATMs as well as closing its branches in the south Sligo towns of Tubbercurry and Ballymote.

There has been outrage at the recent announcement that the bank is to close over 80 branches nationwide including the two south Sligo outlets and a number of Mayo branches too.

Elected members of Sligo Co Council have been campaigning ever since for the retention of the bank’s ATMs at the very least while the council Cathaoirleach, Cllr Dara Mulvey, proposed that Bank of Ireland hand over its owned branches for community use in the event that the closures go ahead. 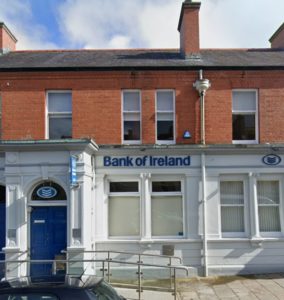 Cllr Mulvey said he was dismayed this morning to receive a reply to his correspondence to the the bank’s CEO Francesca McDonagh.

Replying on behalf of the CEO, Mr Barry Gallagher, Head of Banking Ireland Donegal, Sligo & Leitrim stressed that the branch closures will not take effect until September of this year.

The 24/7 ATMs in Bank of Ireland’s Tubbercurry and Ballymote branches are to be decommissioned but the bank’s new partnership with An Post, which operates a network of over 900 post offices nationwide, will mean customers will be able to access cash services through the An Post network.

“The Tubbercurry branch is a leased building and we will be exiting the lease at the appropriate time. Following closure, it is our intention to offer the Ballymote branch buildings for sale,” he stated.

Cllr Mulvey said he is dismayed at this response.

Noting that Bank of Ireland (originally Hibernian Bank) has operated in both Ballymote and Tubbercurry for well over a 100 years, he said it is very disappointing that it will not consider making the Ballymote branch available as a community facility/working hub for locals. Such a gesture would be an ideal token of support to the two communities that have been loyal customers for years.

“The concept of working hubs is been actively promoted by Government as a solution to urban renewal. The Ballymote building would need little or no modification for this and has high speed broadband in situ,” Cllr Mulvey stressed and accused Bank of Ireland of engaging in a PR ploy when it boasts about giving millions of Euro to community initiatives.