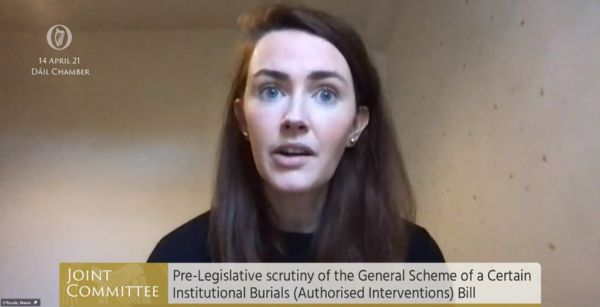 Coroners should be instructed to investigate the mass graves at mother and baby homes, survivor groups and experts have said.

Legal expert Phil Scraton said that while costs will be unprecedented, a price cannot be put on truth and accountability.

The Oireachtas Children’s Committee has heard from a range of experts and campaigners as it scrutinised the Industrial Burials Bill.

The proposed legislation will enable an agency to be set up to oversee exhumations of remains at former mother and baby home institutions.

Campaigners want coroners involved in the investigation of the burials of up to 9,000 babies.

TDs and senators heard that a team of archaeologists had found 17 chambers of sewage filled with the remains of infants, older babies and children up to four years “discarded without coffins one on top of the other”.

A report published in January found that the religious institutions for unmarried women who got pregnant produced high levels of infant mortality and misogyny.

Many mother and baby homes were run by Catholic nuns.

There has been criticism around the proposals in the legislation to disapply the powers of the Coroners Act during the excavation process of the burial sites.

“We have set out that the coroner has obligations and that was the first question I raised – what is the explanation for the absence of inquests to date?

“We need real answers to that. What are the civil servants saying as to why the coroner has been disapplied in this law. Do they think it’s too expensive?”

Phil Scraton, professor emeritus, School of Law at Queen’s University in Belfast, said: “The important issue for me here is that it will cost what it takes.

“So whilst I acknowledge this will be unprecedented in its costs and organisation, it is a price that will have to be paid.”

Prof Phil Scraton (QUB) told the Committee that the Institutional Burials Bill breaches Art 2, ECHR. Prof Ray Murphy (NUIG) echoed this: coroner should have jurisdiction over burial sites – in line with Art 2 ECHR, an effective mechanism is needed to investigate cause of death

Campaigner Susan Lohan said it will be an “incredibly long process” to examine every single death.

She added, however that the State has an obligation to its citizens.

“I would argue that when it comes to speeding up the process for certain family members – there are family members today who want to know where their loved ones are buried and how they died,” Ms Lohan added.

“Those cases could be prioritised. We should deal with those families who are suffering today.

“I concur with Catherine (Corless) on the need to hold the various religious orders to account.

“We have the perverse situation in Ireland that these organisations – businesses as Catherine rightly said – that we as taxpayers are helping to fund those organisations as we continue to outsource vital services to them.

“In some of these campuses where these atrocities occurred, the same religious orders are still in situ providing services, like those for intellectually disabled individuals.

“We have to get our house in order and decide are we going to subsidise these organisations who carried out these atrocities or cull them from the list of organisations that we might engage with the provision of services.”

She also said it was “astonishing and inexplicable” that the Minister for Justice Helen McEntee hasn’t spoken out about the lack of progress and action around mother and baby homes.

Social Democrat TD Holly Cairns said the Coroner’s Act sets out that it is the duty of the coroner to hold an inquest where a body is found and when a body is found in State custody or detention.

Historian and campaigner Catherine Corless said the State should do all its can do to ensure justice for the woman and children.

She added: “I have had to fight that for many years, that these were individual babies, Irish citizens, they could be with us still, they could be sitting here in the Dail.

“They had every potential if they were given half the chance.”

Earlier, Ms Corless said she was “naive” to believe that action would be taken immediately to exhume remains when she discovered the bodies of babies in a sewage tank at a mother and baby home in Tuam, Co Galway.

Ms Corless told the parliamentary committee that it was to her “dismay” that the site, which was run by the Bon Secours, was put back to its original condition and exhumation of the remains did not happen after it came to light.

Her research revealed that 796 babies and young children had died and been “indecently buried in a defunct sewage system” at the Tuam home between 1925 and 1961.

Ms Corless said statements of “shock and horror” had been proclaimed by the Government and the President of Ireland in March 2017 when the discovery of the babies’ remains came to light.

“I naively thought then that my work was done. Now sure that there would be immediate action by the State, Church and Galway County Council to do the right thing and exhume the babies from the sewage site,” Ms Corless said.

“Within a month, to my dismay, the Tuam home tragedy fell silent. The site was restored to its original condition. The chambers were closed in, soil was put back.”