Friends and relations have rallied around a Mayo family whose home has been rendered uninhabitable on the double.

Over €1500 has been already been donated in less than one week to a Go Fund Me Campaign established in support of Trevor and Jennifer Mayock and their three children from Ballina.

The Mayocks lost their beautiful home to a fire on September 11, 2020.

The family lost all of their possessions and had to move into a rented house as their property was left uninhabitable by the fire. 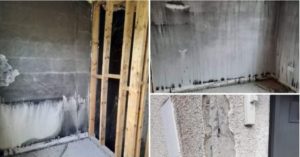 The Mayock’s house, which was rendered uninhabitable by a fire last September, may now face demolition after it was confirmed as being contaminated with the deleterious mineral known as pyrite.

There can be few things more devastating than a house fire but, sadly, there was more bad news in store for the Mayocks.

When an assessor visited their home in October to inspect the fire damage he reported that there were concerning cracks in the property’s blockwork.

The house was duly tested and confirmed as having pyrite contamination in February of this year.

This terrible news means the Mayocks, who had hoped to be back in their refurbished home within five months, may have to wait for a couple of years as it is likely that their home will have to be demolished and rebuilt.

In the interim the Mayocks will have to continue to pay their mortgage as well as the rent on the property that they moved into after the fire.

Jennifer Mayock told the Western People that the last few months have been very stressful but that the family is taking things day-by-day:

“Life goes on and you have to go with it,” she remarked.

With no supports available to families in a situation like this, Jennifer’s cousin set up a GoFundMe page to help the family meet their rental costs and thereby relieve some of the stress they are under.

Jennifer said she and Trevor have always worked very hard for everything in their lives including the family home which they bought about 15 years ago.

Consequently, she was initially reluctant to accept help in the form of the fundraiser but her cousin, Sharon Carroll, convinced her and she is so grateful to all those that have donated to date:

“A lot of people we know have donated but lots of people we don’t know too. These are such difficult times. Everyone has their own things going on but people are so generous. I just can’t believe it,” Jennifer said.

It is hoped that the Mayo public will continue to generously support this young family that has been through so much upset, stress and financial pressure.

You can donate to the GoFundMe account via the link below: