Martin and the Whales inspired Irish-America 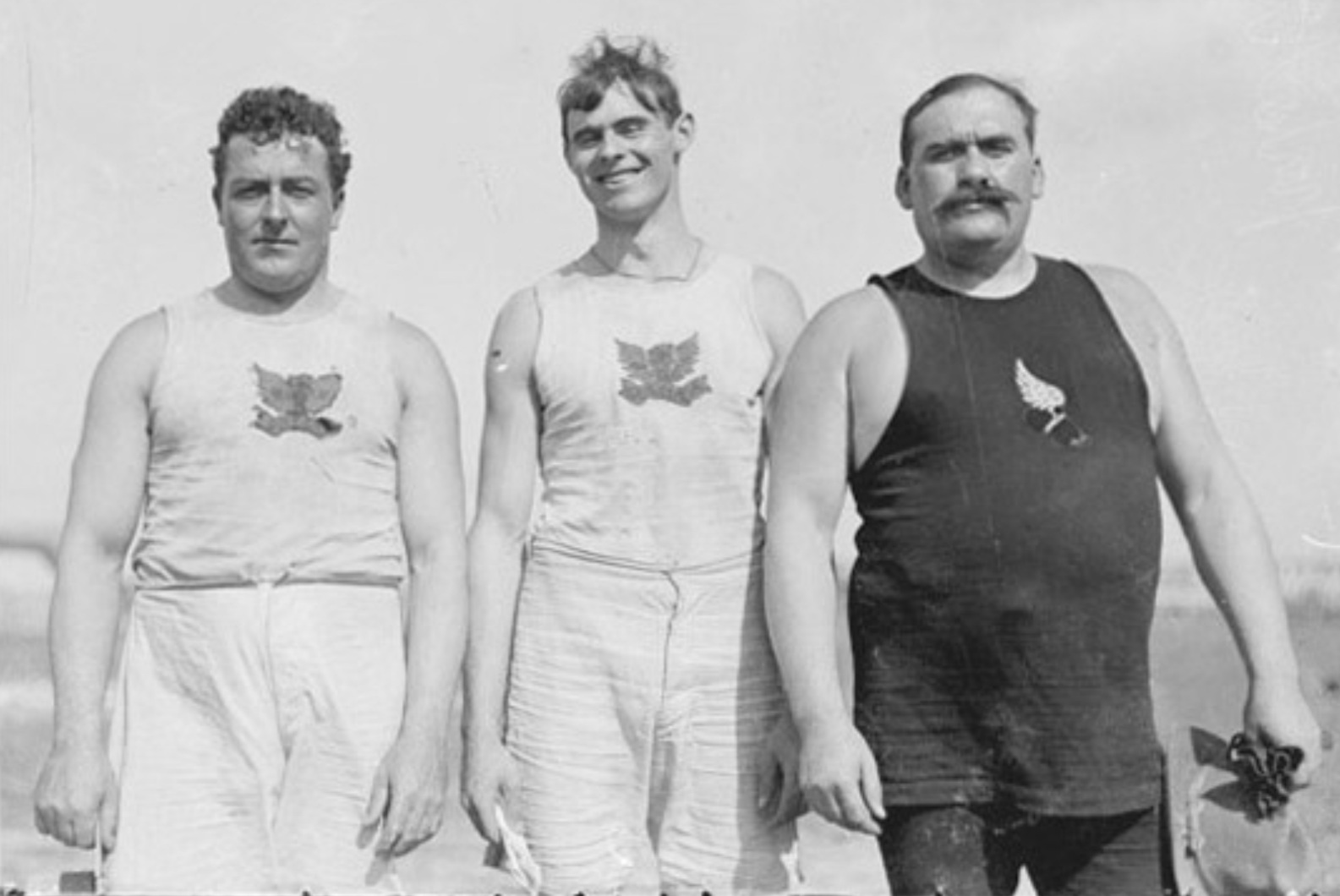 John Flanagan, Martin Sheridan and James Mitchell, three of the Irish Whales who dominated athletics in America at the start of the 20th century, at the Olympics in St Louis in 1904.

Martin Sheridan, the Bohola-born Olympian for whom the Martin Sheridan Bursary Fund is named, was among the foremost athletes in the world in the first decade of the 20th century. Sheridan emigrated to the United States at the age of 18 with two of his brothers and joined the New York Police Department, as well as the Queens-based Irish American Athletic Club (IAAC).

The IACC had been established in 1898 on a plot of farmland at Laurel Hill, which would soon be developed into a state-of-the-art athletic facility known as Celtic Park. The club set itself in opposition to the older, more established and more exclusive New York Athletic Club, welcoming athletes of Jewish and black descent into their membership.

At the time, Irish immigrants in New York were largely looked down upon by the native New Yorkers. In the half-century since the Great Famine, well over a million Irish had landed into the great cities of the north-eastern US, most of them poor, hungry and poorly-educated. Public opinion, aided and abetted by a compliant press, saw the Irish as ignorant, dirty and in some cases almost sub-human. The NINA sign (No Irish Need Apply) became a common sight around New York, Boston and Philadelphia in the late 19th century.

But the athletes that emerged from the IACC played a big part in changing those perceptions. The majority of the members were either first or second-generation Irish, and a large proportion were also members of the NYPD, like Sheridan.

Sheridan, who went on to win three gold medals in the discus at the 1904 and 1908 Olympics in St Louis and London respectively, and two more in the discus and shot put at the Intercalated Games in Athens in 1906, was one of a remarkable crop of Irish-born or Irish-American athletes who collectively became known as the ‘Irish Whales.’ Between them, they claimed 12 Olympic gold medals, three silvers and two bronzes in the years between 1900 and 1924. 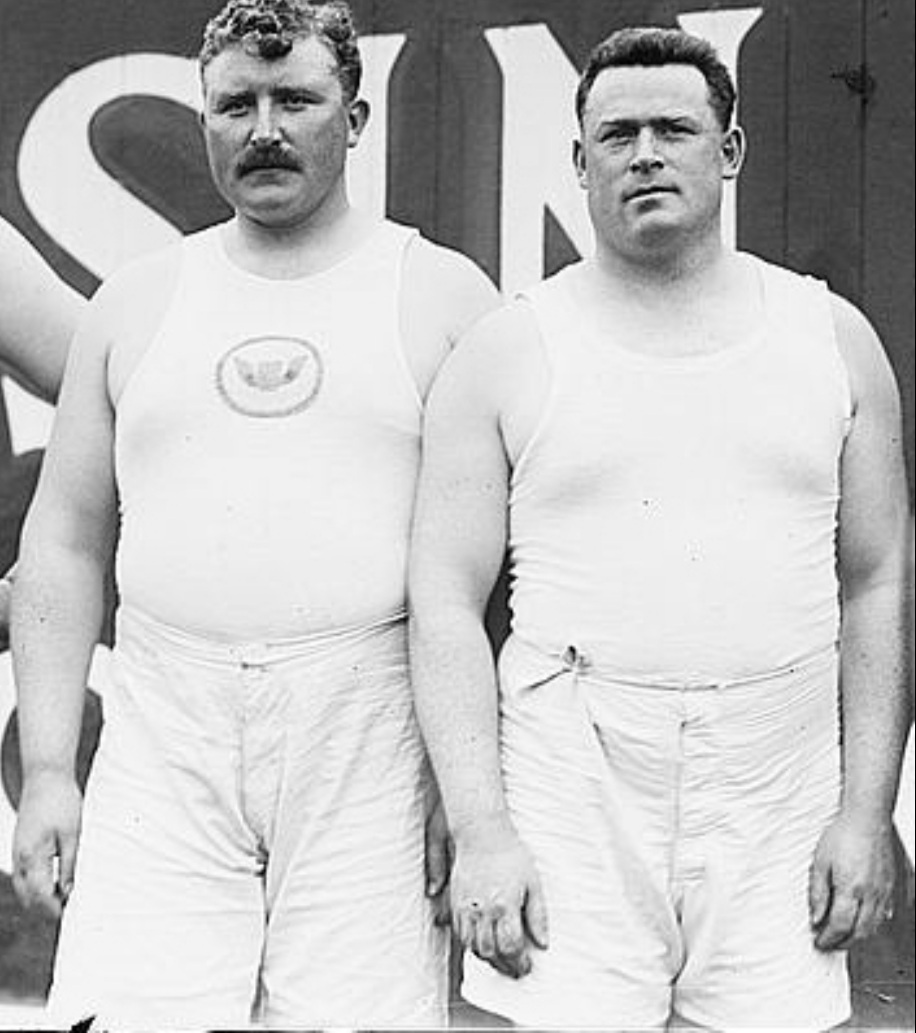 Clareman Pat McDonald and Matt McGrath from Tipperary, pictured at a training camp for the 1912 Olympic Games.

The Whales excelled primarily in the throwing events: the discus, the hammer and the shot put, although Sheridan, a gifted all-round athlete, also won two of his silver medals for the standing long jump and standing high jump in 1906. A theory is that the Irish-born athletes benefited from an athletic grounding provided by the nascent GAA in Ireland, an idea that is supported by the fact that Maurice Davin, the first Uachtarán of the GAA, went on a trip to the US in 1888 as part of a party that included James Mitchel with the mission of introducing hurling to America (it sadly never quite got off the ground).

The Whales (a nickname apparently bestowed on them because of their ferocious appetite for food) were among the first sporting superstars in the United States and their success had a significant and lasting effect in altering public attitudes towards the Irish.

Crossmolina native Kevin Martin has told the story of the IAAC at the Whales in his book, The Irish Whales: Olympians of Old New York, while a biography of Sheridan – Martin Sheridan: Mayo’s Famous Son – by Margaret Molloy was published in 2019.

Applications for the 2021 Martin Sheridan Bursary scheme, in partnership with the Western People, are now officially open.

The scheme is designed to financially support young sportspeople who have demonstrated outstanding ability and the potential and desire to perform at the highest level possible in their chosen sport. A sum totalling €5,000 has been allocated from Mayo County Council to go toward the bursary scheme.

Nominators should aim to put forward a complete and concise application for their chosen nominee. Application forms and more information can be found at mayo.ie. Closing date for applications is this Friday, April 16.