A plucky visitor who defied Covid-19 restrictions and flew hundreds of miles to winter in Ballina this year  has been rumbled by a local resident.

Peter Flanagan, identified the unexpected guest – an immature black headed gull – earlier this year and has managed to track its exact origins. 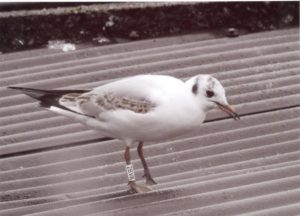 Peter was able to identify the serial number on the gull’s identification ring by zooming in on this great pictured he captured from the window of his house.

Wildlife enthusiast, Peter, has been an avid bird watcher all of his life.

While this species of gull is no stranger to Mayo shores, this particular specimen, caught his eye as he noticed that its leg had been ringed.

Some clever photography work enabled him to ascertain the details of its ID and, having contacted Bird Watch Ireland, Peter was referred to Tom Dougall in Edinburgh Scotland.

He emailed Tom who confirmed that the gull had been ringed as a chick at a breeding colony in the Moorfoot Hills just south of Edinburgh.

Tom has been ringing the gulls since 2013 and believes the one found in Ballina – which was ringed on June 8, 2020 – is the furthest west documented sighting of any from that colony in all that time.

Tom Dougall told Peter: “There are regular sightings in Norther Ireland but hardly any in Éire. The furthest east have been on the German/Poland border on the Baltic coast.”

Peter’s photograph was the first reported sighting of that particular gull since it was ringed.

Peter said the gull has been around Ballina all winter and that he managed to capture him on camera from the window of his home.