Knock nun remembered for her kindness 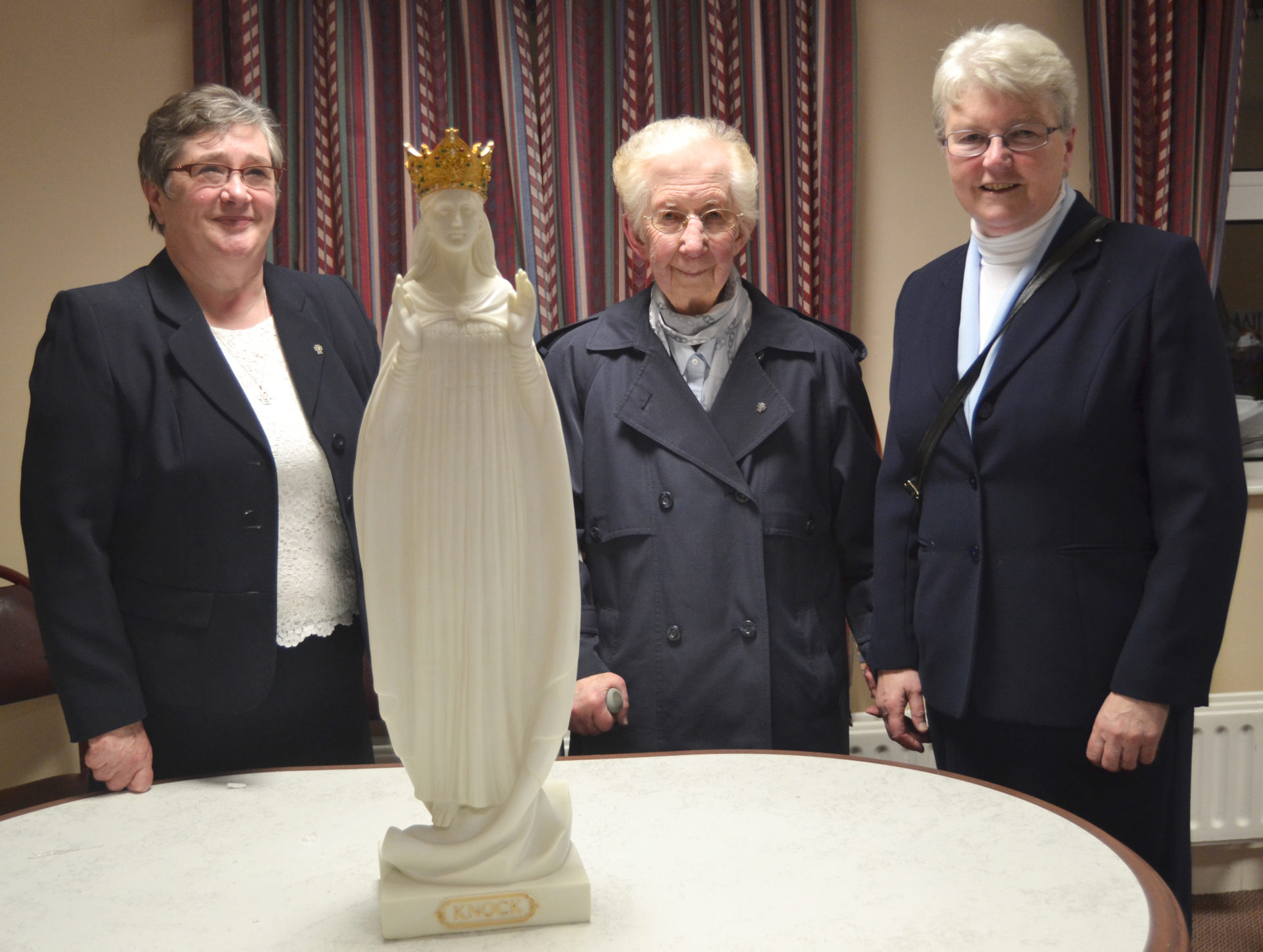 Sr. Carmel, Sr. Magdalen and Sr. Maureen were presented with a statue of Our Lady of Knock at a Mass of Thanksgiving for their dedicated service to St. Mary’s Hostel and the people of the parish on November 4, 2017. Missing from photo Sr. Anne Killeen.

Knock bid farewell to a Daughter of Charity known for her kindness.
Funeral Mass for Sr Magdalen O’Neill (Bride), leader at St Mary’s Pilgrims’ Hostel in Knock since the late 1990s was celebrated in the village yesterday afternoon.
Those who worked under Sr Magdalen spoke of “fond memories” and her “kindness” as they sent messages of condolences to the Daughters of Charity and her family over the weekend.
“Always smiling and a treat to deal with,” one said.
“Her gentleness and kindness will be long remembered by those who had the privilege to know her,” said another local.
“She was such an exceptionally kind, humble, and gracious person. May she reap the reward now of a life well-lived,” read another message.
Bride O’Neill, late of Enniscorthy and Portlaoise, applied to enter the religious community in June of 1947 and was so happy to receive a letter of acceptance in July of that year that she forgot to reply to it.
It was post-war times when she completed her time in the seminary and travel was restricted so unlike the majority of Sisters she didn’t get to travel overseas. Instead, she worked with children’s services in Stillorgan and then onto St Vincent’s Hospital in Fairview. There she was known for her “great sense of devilment” and often rescued young nurses when they got into trouble with the powers that be at the time.
From there she was posted to a city centre for troubled teenage boys before moving to Drogheda where she cared for adolescent boys. She was the first Sister to employ male childcare workers.
In the late 70s, she undertook a residential childcare course before moving to Belfast. She was based in a local authority house and was leader of the local community of Sisters for 12 years. Helping women through the trouble, she helped to teach them to knit, cook and budget their finances as well as improving their self-confidence.. She also set up a thrift shop where women could indulge themselves with bargains.
The sisters also acquired a number of mobile homes along the sea which families could rent in the summer months when they couldn’t afford to go elsewhere.

In 1996 she arrived in Knock as the leader of the local community and ran St Mary’s Pilgrims Hostel. She continued to be heavily involved until the Sisters withdrew from the hostel and it was transferred to the Shrine a few years ago.
Since January of 2017 when the Sisters moved to a smaller house in the village she enjoyed having quality time for spiritual activities and remained as active as she could.
Her fellow Sisters described her as a “people’s person” who was “blessed with a warm personality and a genuine interest in people”.
“She was totally given to the service of others. She brought great kindness and generosity of spirit to every area she worked in.”
Sr Magdalen, the eldest of five, is predeceased by her parents Jeremiah and Mary, brother Tim and sister Maureen (Farrell) and is survived by her siblings Joe (Portarlington) and Nora Ward (Ballinasloe), nieces, nephews, Sister of Charity, extended family and many friends in Dublin, Drogheda, Belfast and Knock.