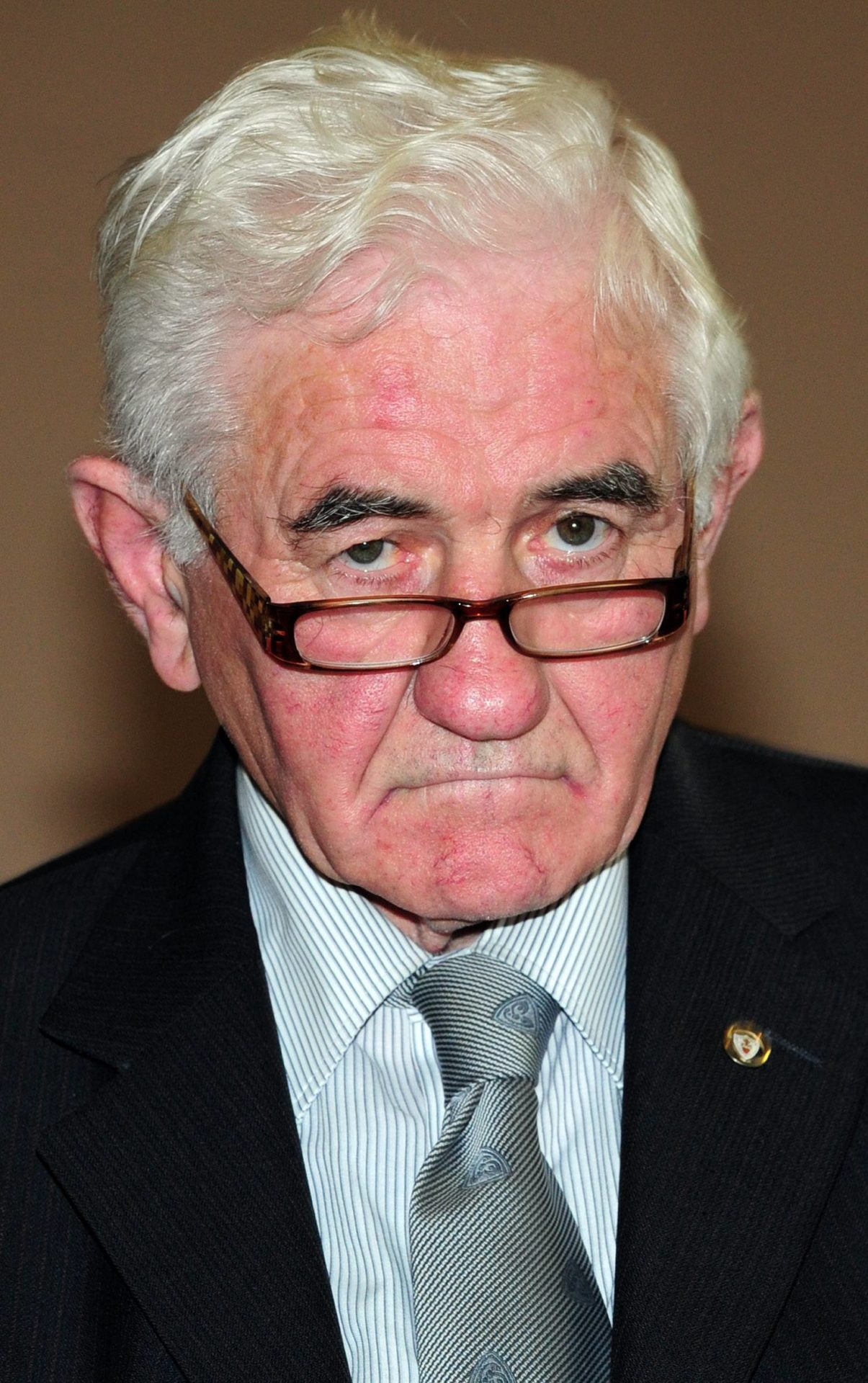 The late PJ McGrath, Claremorris and Kilmaine, who passed away last week. He was aged 79.

Few people have been known to so many for so many different reasons than the late PJ McGrath whose death was announced on Monday last, March 22. He was aged 79.

Some will forever remember his extraordinary career as a GAA administrator, others can still recall his days as the player good enough to feature in Mayo senior and junior football panels. Some will be aware of his success in football management, which included guiding St Colman’s College, Claremorris to an All-Ireland senior ‘B’ championship title, and more will testify that it was at that school, and previously at Claremorris Vocational School, where he excelled as a teacher. Plenty will know about his active interest in politics and in the organising of Fianna Fáil for whom he served as Mayo branch chairman, and then there was his central role in the establishment of St Colman’s Credit Union. A life well-lived as they say.

But, of course, to so many GAA supporters across the world, he’ll always be recalled as the man who refereed that game, who allowed that goal, Gaelic football’s most famous of all time.

PJ, late of Kilbeg in Claremorris but a native of Kilmaine, had received the ultimate honour that can be bestowed upon any Gaelic Games referee when he was assigned to take charge of the 1982 All-Ireland senior football final between Offaly and Kerry.

‘Five in a row, five in a row/It’s hard to believe we’ve won five in a row’ sang folk group Galleon as they hit the recording studio early so that they could have the victory ballad ready in commemoration of Kerry becoming the first team in history to win five All-Irelands on the trot.

‘Five in a row, five in a row/Christ we were close to five in a row’ Kerry full-forward Eoin Liston was heard to rhyme wistfully afterwards.

Back in the Faithful County they were singing a very different tune when in recognition of their shock victory – and the county’s renowned spirit – a man by the name of Bernie Robinson had also put pen to paper:

Down from Rhode they came to gladden Offaly eyes,

They thrilled the Faithful followers, and how can we forget

That Darby shot like cannon-ball that rocked the Kerry net.

Only minutes of the game had remained when Kerry, still two points in front, watched a ball float high and long towards their full-back line from midfield.

The late, great GAA writer Jack Mahon, in his book ‘A History of Gaelic Football’, took up the story.

“A Kerry full-back at the time, Tommy Doyle, sailed up for it. He seemed to get a nudge in the back from Seamus Darby (who had earlier come on as a substitute), who fielded the ball and rocketed it into the net. The referee, PJ McGrath, gave no free. Croke Park went wild.”

Darby, of course, had no such recollection of any nudge.

“I kind of held him with my hip and [the ball] just came into my hands. I had nothing else in my head except go for goal,” explained the super sub in 2018.

And what’s often forgotten, or overlooked, is that Kerry, even on borrowed time, had their fair share of chances to equalise but failed, and Offaly held on for a 1-15 to 0-17 victory.

The match as a whole is regarded by many as among the best All-Ireland finals ever played and for that, PJ McGrath obviously deserved a tremendous amount of credit.

“Seamus Darby became a hero not alone in County Offaly but throughout the country,” reckoned Jack Mahon, who added: “Kerry did no whingeing afterwards but accepted defeat like sportsmen.” 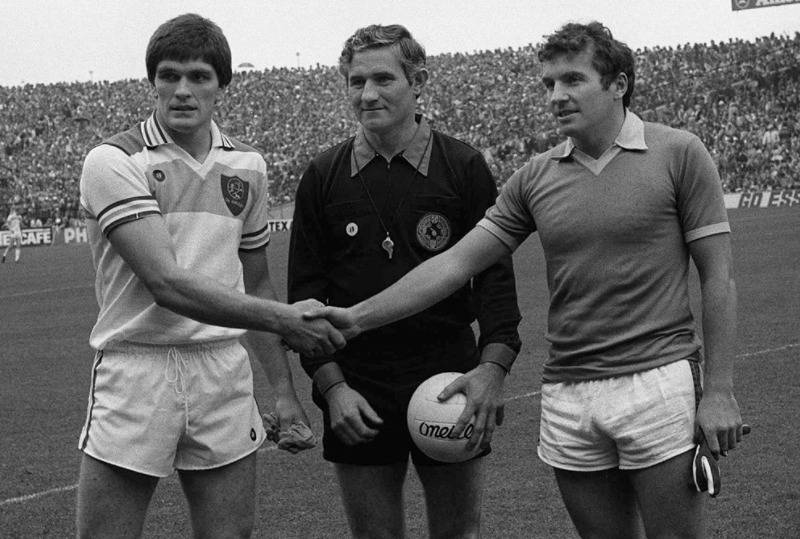 Match referee PJ McGrath with Offaly and Kerry captains Richie Connor and John Egan, prior to the throw-in of the 1982 All-Ireland SFC final.

Rarely has any sport been so defined by one singular moment. RTÉ commissioned a radio documentary about that goal, TG4 produced a television documentary and Darby himself would eventually publish an autobiography called, what else, but ‘About That Goal’.

And as for PJ McGrath, he was still only halfway through a refereeing career that stretched 32 years in total, one that began in 1965 when he was still heavily involved as a player (he was a member of the Mayo senior and junior football squads in 1966 and featured on the Kilmaine side that won the county intermediate championship in ’68), and which lasted all the way until 1997.

He refereed at every level in the game, in every county in Ireland, and in places as diverse as England, Singapore, Australia and America, and aside from that senior final of ’82 he was also able to count two All-Ireland minor finals, four Vocational schools finals, Railway Cup finals, national club finals, league games and International Rules games in Australia among his thousands of markings over the years.

“[PJ] was in demand by clubs everywhere because they knew that fair play and the protection of players came first with him,” is how McGrath was remembered in 2014 when he attended Croke Park for induction into the National Hall of Fame for Gaelic football referees.

On that occasion he cited the late John Maloney from Tipperary and fellow Mayo man Dr Mick Loftus as the biggest influences on his decision to take up refereeing. And interestingly, McGrath at one stage sought to again follow the lead of Loftus and this time become GAA President.

First elected to Mayo County Board in 1965 and sent forward as a county delegate to the GAA’s Annual Congress in Belfast in 1971, PJ would go on to hold several key officerships at county, provincial and national level. A five-year term as Mayo GAA chairman from 1997 to 2002 actually came after he had already concurrently served as president of Connacht GAA and chairman of the National Referees Committee for three years.

That groundwork complete, it all led to PJ’s bid to take the GAA’s top job in 2002 but at the Annual Congress held in Dublin’s Burlington Hotel, neither he, Seamus Aldridge or Albert Fallon were able to thwart Kerry candidate Sean Kelly who would proceed to transform the way the outside world viewed the GAA by eventually persuading the association to abandon Rule 42 and grant the use of Croke Park for non GAA events.

If any one thing probably summed up the calibre of PJ McGrath, who in 2015 was nominated by the South Board to the position of Mayo GAA President, it might just be that during the rough and tumble days in which he proudly played club and county football for Kilmaine and Mayo, the full-back held the distinction of never having been shown a red card.

The world is a poorer place for his passing.

Mayo County Board flew the green and red flag at half-mast above MacHale Park as a mark of respect.