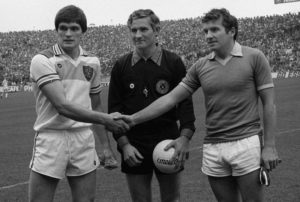 He will forever be remembered as the Mayo man who refereed the famous 1982 All-Ireland senior football final between Kerry and Offaly when Seamus Darby’s late goal denied Kerry their five-in-a-row.

The passing of PJ McGrath has evoked great sadness across the GAA community in Mayo and further afield today (Monday). The former County Board chairman gave sterling service to the organisation as well as being an active and dedicated member of Fianna Fáil.

PJ, who was in his late 70’s, will also be remembered as a great teaching servant of St Colman’s College in Claremorris. The news of his passing comes just one month after his teaching colleague, PJ Geraghty.

Born and raised in Kilmaine, PJ played his football with the local club and was a member of the Mayo senior panel in 1996, having also played full-back for the Mayo Junior team on the same year.

After he finished playing, PJ became the man in the middle, refereeing games from 1965 for the next three decades. Such was his talent, PJ refereed games at local, national and international level.

PJ was heavily involved in GAA administration, serving as President of the Connacht Council and chairman of the National Referees Committee. He served as chairman of Mayo County Board from 1997 to 2002. Over this time he also contested the position of Uachtarán CLG.

PJ and his wife Phil lived in Kilbeg, Claremorris for many decades where they raised their family. 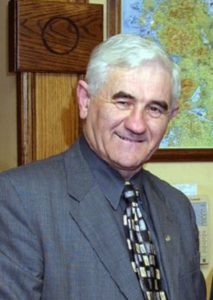 Paying tribute to PJ, Dara Calleary TD said: “PJ was one of life’s gentlemen. He was a distinguished member of the  GAA as a player, a referee and an official at all levels. He was also a dedicated and active member of Fianna Fáil. He served as chairman of Mayo Fianna Láil. I and many more benefited from his generosity of time and spirit and his immense wisdom and experience. I will forever be grateful for that.”