There must have been moments in the recent past when Ray Moylette figured that if he had a duck, she’d drown.
Twice in the last two years, the Islandeady native has been set to resume a professional career that hit its first major speed-bump with his points loss to Christian Uruzquieta in the TF in Castlebar all the way back in December 2018. On both occasions, however, he was denied the chance. 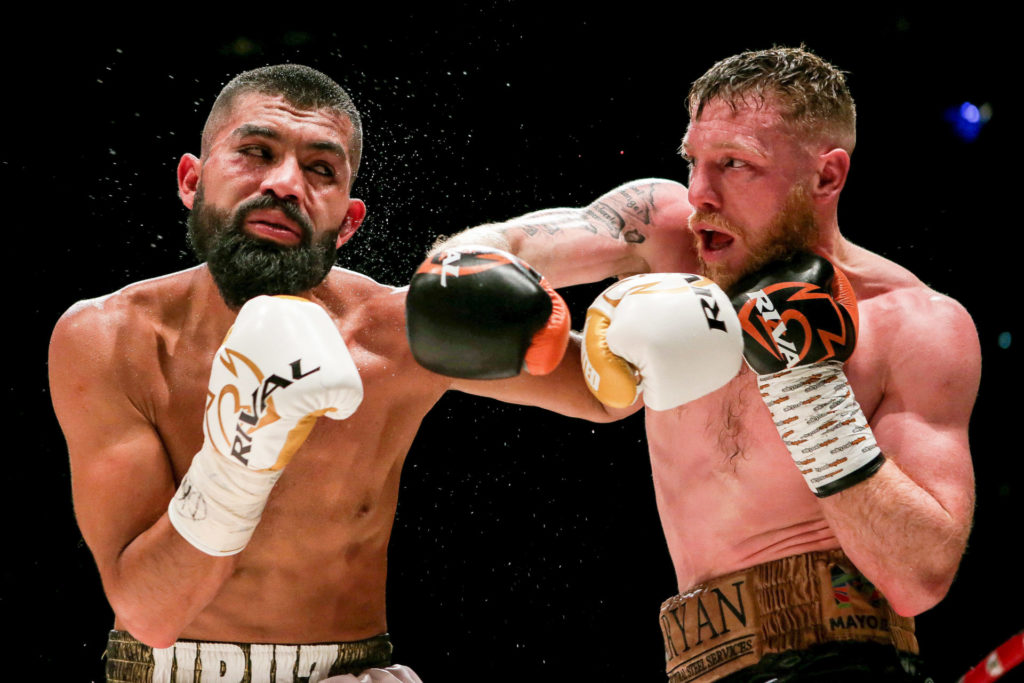 Ray Moylette in action against Mexcian Christian Uruzquieta at the Royal Theatre, Castlebar in December 2018.

First, in the summer of 2019, Moylette was due to fly to Boston to take on Larry Fryers but was prevented from departing Dublin Airport by US Immigration officials over a visa issue. Last March, he made it across the Atlantic to Boston for a re-fixed fight with Fryers but for the onset of the Covid pandemic to stop him in his tracks.
“I landed over on the Tuesday, Trump declared a national emergency on the Wednesday and I was flying home Friday,” recalled Moylette this week. “I had been hoping to get back into the ring in January 2019. If you told me then that I’d be over two years waiting, I would have thrown in the towel.”
It’s been a frustrating time for the former World junior and European senior gold medalist but after a full 27 months, his wait is finally set to come to an end this weekend. Moylette is on the card for a fight night in Brussels this Saturday night, taking on a Polish fighter named Artur Gierczak in what he freely describes as a ‘tick-over fight,’ designed to get him back into the rhythm of pro boxing ahead of what he hopes will be a busy 2021.
Moylette, who turns 31 in April, has spent lockdown training at ‘50 to 60 percent’ between his home in Castlebar and St Anne’s Gym in Westport. Since his fight was confirmed in late January, he has upped his training and spent two to three days per week training in Dublin with Packie Collins at his Celtic Warriors Gym. Collins has been key in getting the fight made and a number of Moylette’s teammates, including Eric O’Donovan, Craig O’Brien and Niall Kennedy, are also on the card. He’s been sparring with James Tennyson, the Belfast fighter who challenged for the IBF super-featherweight title in 2018.
“I’ve gone straight back in at the deep end with him, after being out of the ring for so long, so that’s good action,” offered Moylette, who will fight at 143lbs this weekend but aims to come down to 140 for his next encounter. He also confirmed that Martin Brennan, his long-time coach and mentor at St Anne’s, is flying out to Belgium as part of the team.
“Martin has been by my side since the very start so I’m delighted that he’s sticking with me. He’s more an advisor for me now but I’d love to have him in my corner with Packie,” he said.
Covid will obviously have a bearing on the fight night. There will be no crowd, first and foremost. Moylette and the team will fly from Dublin on Friday afternoon for a Friday night weigh-in, meaning they will be in the middle of a water cut during the flight.
The team will be kept inside their own bubble for the duration of their stay; showtime is Saturday night and after that, it’s straight back on a plane and home, assuming the Covid tests come back clear.
“There’s no room for error; we’re in there for a job and then home again,” as he puts it.
It’s a far cry from Moylette’s last fight, that night before Christmas 2018 when the TF was heaving and the man from five miles out the road showed all his heart to rise from two brutal knockdowns to bring his Mexican opponent all the way to the final bell. But after waiting so long for another opportunity, Moylette isn’t about to start complaining. 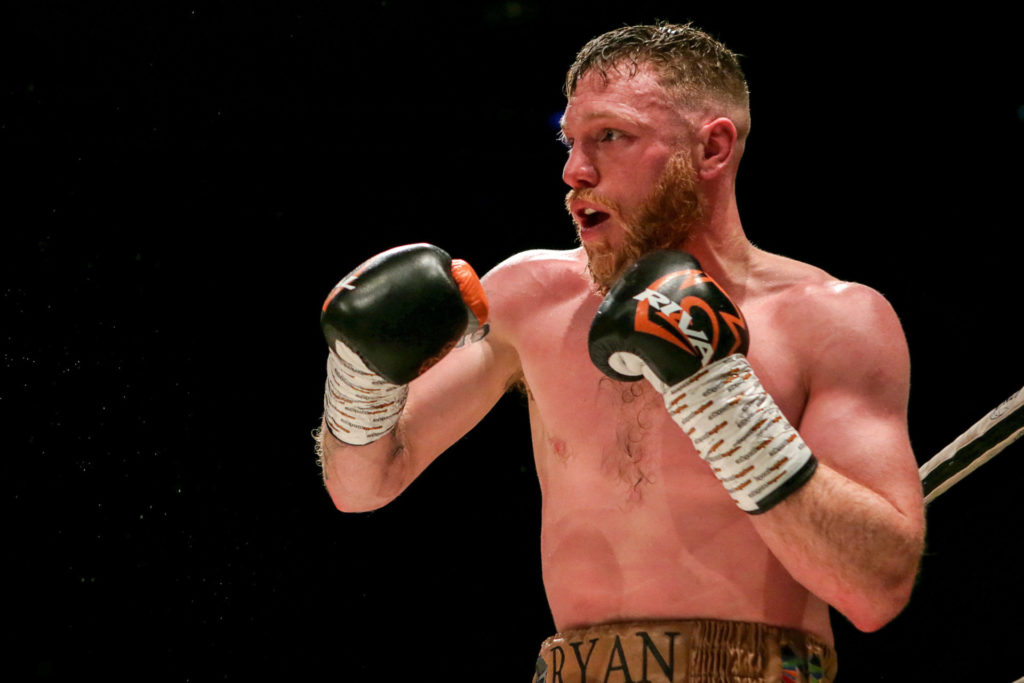 Ray Moylette: “This is the restart, this is my resurrection back into it again.”

“This is the restart, this is my resurrection back into it again,” he stated.
“It’s a stepping stone. I need one or two tick-over fights, which is what this one is. But there’s nothing taken for granted. I’m going out to do a job. I have too much to lose now at this stage. All my eggs are in one basket now and there’s no stone left unturned.”
A huge amount has changed in Moylette’s life since he last heard a competitive bell. He has started a new job working for Western Care in Castlebar, while he and his wife Sharon welcomed the birth of their first child, a boy named Colby-Ray, last May.
“Thankfully things have been good during lockdown. I was always working, I wasn’t just sitting at home waiting. The arrival of a new baby as well has kept us busy,” he offered.
“Now I just want to get back boxing. I didn’t realise how much I wanted to get back until the phone call came through and I was on the road to Dublin again. I jump out of the bed in the mornings again now because I know this is ahead of me. I have purpose again. I’m really looking forward to getting stuck back in.”
Colby-Ray is nine-and-a-half months now and his father happily admitted that the new arrival has changed practically every aspect of his life.
“He’s the best thing that’s ever happened to me. No matter how many people tell you about it, you really have to experience it yourself,” he said.
“It’s always having to be accountable now. Myself and Sharon have a joint-calendar on our phones and I have to book in my slots for training, my slots for work, everything. I can just head off training now whenever I want.
“That was a bit of a shock for me. I’m a free spirit, I used to come and go as I pleased, whereas now I can’t go off during the day if the ladeen is at home having his nap or whatever. I have loads of time on my hands and I’m spending it with him, watching him grow and learn, and that’s an experience in itself. It’s something I wouldn’t have the opportunity to do if I was full-time in Dublin, so it’s great to get that time with him.”
Fatherhood has changed how he approaches his boxing too; two years ago, before the Uruzquieta fight, he was steadfast in his ambition and confident that a world title shot lay in his future. Now, the far side of 30 and with a family to think of, his goals have shifted. A title shot is still the dream but more practical concerns have come to the fore.
“I’m probably more conscious of the money side of it now. Winning a belt would be lovely to have up on the mantelpiece, but to have a few pound to send Colby-Ray to college if he wants to go would be far more important,” he said.
“In terms of the health side, not an awful lot (has changed), not yet anyway. Maybe when there are tougher fights coming. There are days when you have headaches after sparring and it’s hard to sleep, or days when your body is aching. Thankfully I’m not in those trenches yet but the day is going to come, and I’ll have to make the decision if it’s worth it.
“So it definitely does change my thinking, but in the ring I’m still the same man. Colby-Ray is not in my head in the ring; it’s just me and my opponent. That’s how it has to be. As soon as he comes into my head, I’ve lost the edge.”
Ray Moylette takes on Artur Gierczak this Saturday night at the Dôme de Charleroi in Brussels. The fight is pay-per-view and can be subscribed to via eventbrite.fr.