A stream of posts on Mr Biden’s official President of the United States (POTUS) social media channels included some recollections of his official visit to Ireland in 2016 when he was Vice President to Barack Obama.

Mr Biden’s pride in his Irish roots is known the world over and his 2016 visit saw him tour Mayo and  meet distant cousins in Ballina where his great-great-great grandfather, Edward Blewitt (1795-1872), lived before emigrating to the US. 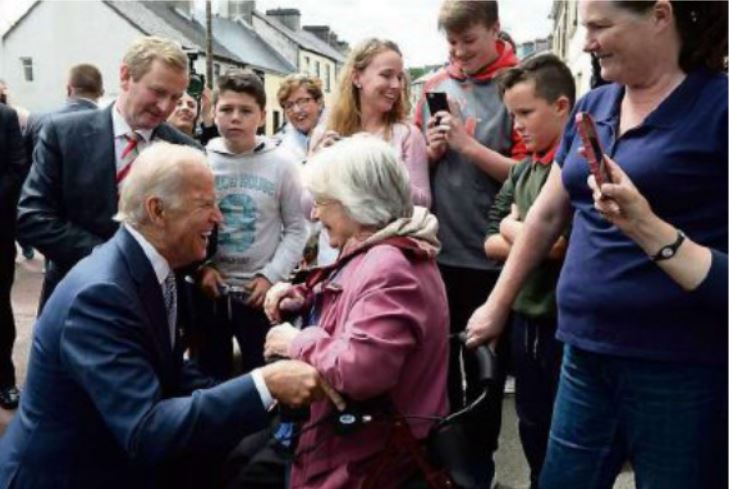 The then US Vice President Joe Biden meets Ballina resident Mona Curry during his official visit to the home town of his Irish ancestors in 2016.

Mona Curry was one of several locals Mr Biden stopped to talk to during his walkabout in the north Mayo capital on June 22, 2016.

The then US Vice President dropped to one knee to shake hands with Mona and have a brief chat and the tender encounter was captured in the iconic photograph (left).

Mona, who is now in her late 90s, has made a colossal contribution to community life in Ballina over the decades by sharing her diverse talents which include book keeping, art and music, with many different local organisations, groups and institutions.

Perhaps her best known art work is the stunning stained glass windows in Ballina’s St Patrick’s Church which she was commissioned to design when the church was being constructed.

The photograph taken with Mona Curry in Ballina almost five years ago featured on Mr Biden’s social media timelines yesterday as he reminisced about that trip to Ireland.

The 46th President of the US remarked in the accompanying posts:

“The partnership between our two nations is historic and strong – and I look forward to renewing our bond during this afternoon’s bilateral meeting with Prime Minister Micheál Martin.”