Of all the heroes that took a dip in icy water last month to raise money for a new sensory park in Ballina, local man Paddy Galvin is perhaps the most inspirational. 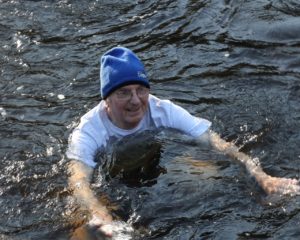 Paddy Galvin (83) submerges himself in Ballina’s Brusna River in aid of the Freeze4February fundraiser for a new sensory park in the town.

The novel initiative was dreamt up by local voluntary groups – FLOW Community Project and Ballina Community Clean Up Group -who are pursuing the development of a sensory park in the town in conjunction with Mayo Co Council.

The community quickly got on board with the daunting challenge and nearly €47,500 has now been raised for the sensory park.

At 83 years of age, Paddy Galvin was the oldest Freeze4February participant and completed his dip on Monday, March 1 last, having been nominated the previous day.

Paddy told the Western People that he was so happy to support the fundraising for the sensory park in Ballina and congratulated all those that took part and are engaged in such wonderful work in the town at present.

He cut no corners for the challenge, taking to the icy currents of the Brusna River for his dip. 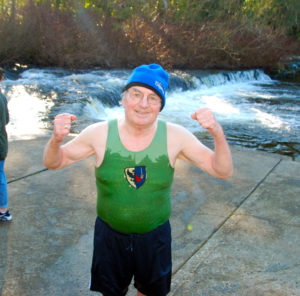 Paddy pictured in his old boxing singlet after his Freeze4February dip at the River Brusna. Picture: John O’Grady.

The recently refurbished old swimming spot holds fond memories for Paddy who regularly cycled there in bygone days with his colleagues from Joseph Murphy’s Wholesale Hardware for lunch time swims.

Paddy was a talented boxer in his youth and wore a green singlet of great sentimental value for his Freeze4February dip. Paddy wore the same singlet over 60 years ago as a member of a Connaught team that fought an Ulster team in the National Stadium and also at a national championship where he had another Ballina great – the late Dick Hearns – in his corner.

Paddy is a former captain and president of Ballina Golf Club and one of its oldest playing members at present:

“I’ve always lived life to the full and I never let age get in the way. It is only a number and is a privilege that many are denied,” he remarked.