Football has opened many doors for Fintan

For those who know Fintan Ruddy, it is no surprise to hear him talk about the importance of building relationships and working together. He was goalkeeper on the Mayo senior football team that contested back-to-back Connacht finals in 2003 and 2004 and has enjoyed a lengthy club career that began with his native Cill Chomain in North Mayo and which at different times has taken him as near as Sligo and as far as Australia. 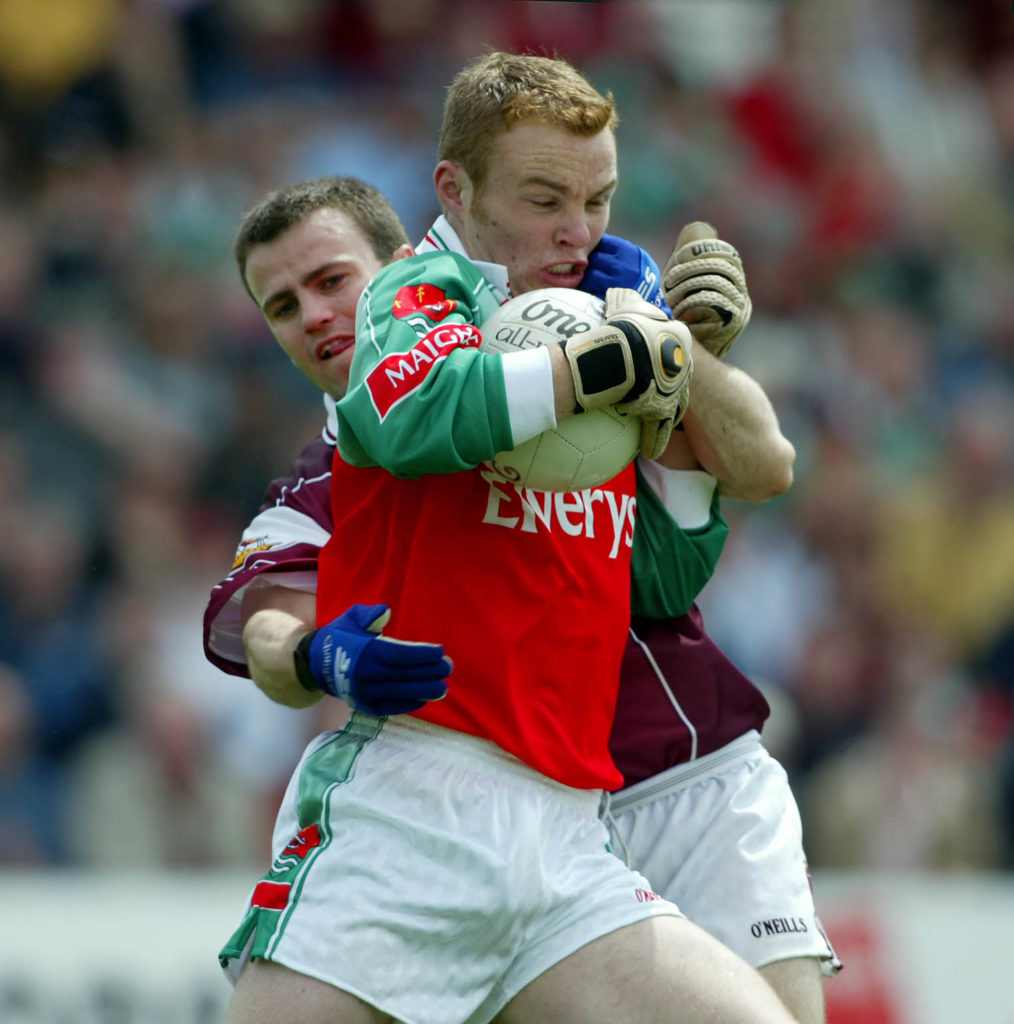 In fact, it was on this very day, March 2, 18 years ago, that Fintan Ruddy made his debut for the Mayo senior football team, and while the result was a disappointing one, with the Green and Red shipping an eight points defeat away to Cavan, one man was to emerge with serious credit. Ruddy.
“All systems malfunctioned and, ironically, the only player who came out of the game with an enhanced reputation was young deputy goalkeeper, Fintan Ruddy,” wrote Denise Horan in the Western People.
Horan herself knew a thing or two about goalkeeping having minded the posts for the Mayo ladies team in no fewer than five All-Ireland senior football finals, four in which she ended on the victorious side.
“Ruddy rose to the challenge, everyone else flopped,” she declared in admiration of the youngster who had been handed the unenviable job of replacing the superb Peter Burke, who was suffering from a hamstring injury.
Fintan Ruddy’s life has been deeply rooted in gaelic football from the earliest age and in a roundabout way it was even central to him developing an interest in engineering that since 2015 has seen him employed as an engineer with Irish Water. In fact, Fintan, who these days lives in Sligo where he is part of the management of the county’s under-20 football team, has always had a keen interest in the outdoors, right back to the days where he worked alongside his father on the family farm.
The teenage Fintan Ruddy also enjoyed working on building sites during the summer months, which sparked his initial interest in engineering and construction. But it was while playing at the local Gaelic football pitch in Glenamoy that his interest was cemented, as the build of a new clubhouse was mooted. Getting involved in its design and having his first real taste of the iterative process between client, architect and engineer, it was this experience that encouraged Fintan to take a degree in Construction Management in Limerick Institute of Technology. He has never looked back Reminiscing about his early days as a graduate engineer as part of STEPS Engineers Week, Fintan says that he was fortunate his first job offered the opportunity to develop key skills and knowledge in all aspects of engineering and management within the utilities industry. 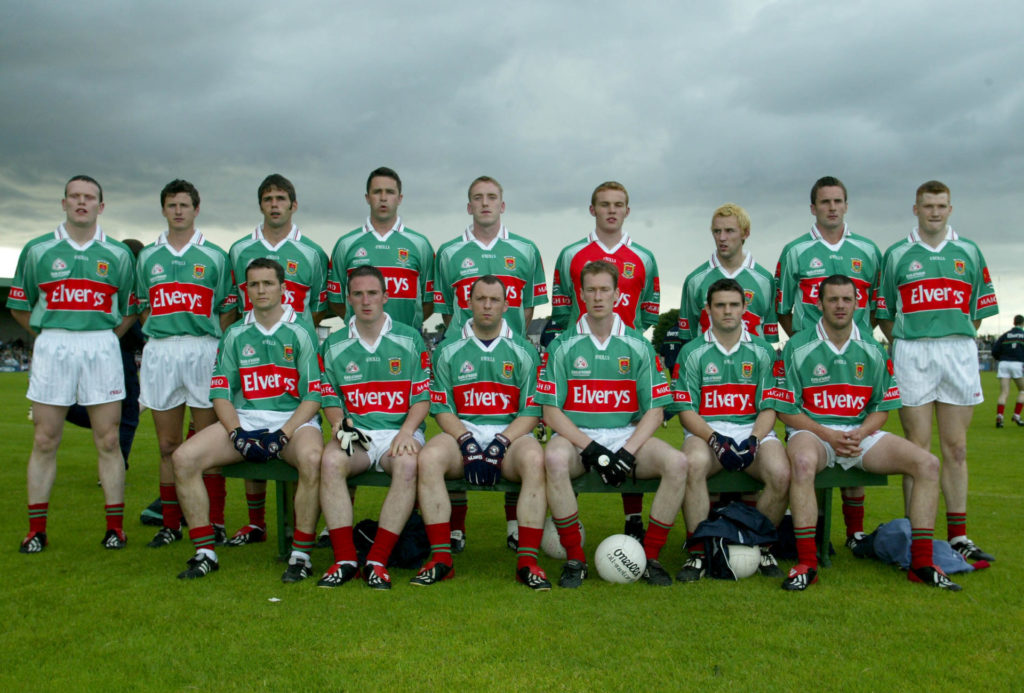 Fintan Ruddy and his teammates before the 2003 All-Ireland Football Qualifier against Fermanagh in Markievicz Park. Picture: INPHO/Morgan Treacy

“Upon graduating I gained employment with a contractor that specialised in public sector projects. I filled the role of construction manager/site engineer for various housing developments with Mayo County Council and the Department of Education, until the downturn in construction in 2009. It was then I decided to relocate to Perth in Western Australia.” That was 2010 – and Fintan Ruddy had no idea just how life-changing and exciting an adventure lay ahead.
“I soon met up with old friends from my sporting life back in Ireland who helped me settle into a new way of life and work in Perth. I immediately realised the huge opportunity for young engineers in Australia and secured the position of project engineer on a $350million upgrade of The Great Eastern Highway, followed by the $1billion development of The Gateway, the largest infrastructure project ever undertaken by Main Roads WA, upgrading the road network around Perth Airport.”
But it wasn’t all work and no play for Fintan after he moved to the other side of the world. Indeed it was some of those old friends and his love of football that helped him in the transition of living Down Under.
“While I lived in Perth, I was drawn back to Gaelic football and the friendships I made. I was heavily involved with Southern Districts GAA club. In 2013 I suggested we play an exhibition game in the coastal town of Mandurah, one hour south of Perth. I arranged the overnight trip for 40 players, as a team-building event, as well as an opportunity to promote our club and the GAA. I was fortunate, as not only was it a fun-filled sports weekend, but I also met Pamela there. We later married in December 2017 and we now have a wonderful 9-month-old daughter, Meabh.” 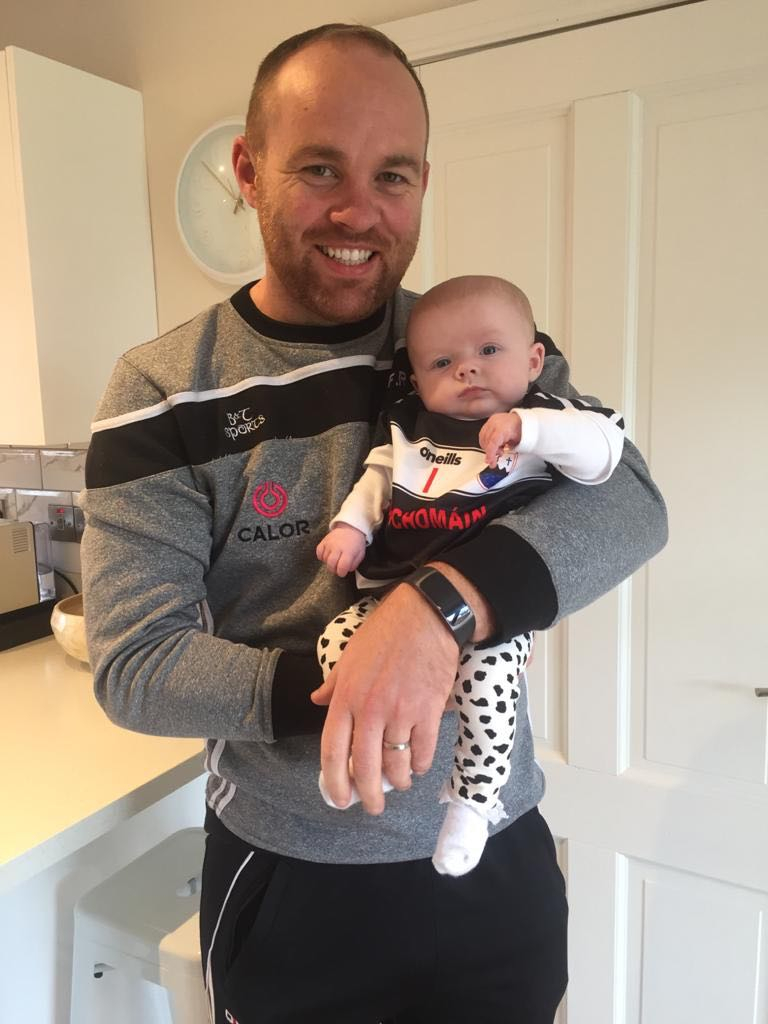 Former Mayo goalkeeper Fintan Ruddy with daughter Meabh. The Cill Chomain footballer is an engineer with Irish Water and as part of Engineers Week 2021, wants to inspire young people to explore engineering career paths particularly within the Water Industry in Ireland.

Returned to Ireland for six years now, Fintan speaks about the size and scale of the challenges his role as an engineer with Irish Water brings.
“Ensuring water and wastewater infrastructure is operating effectively and efficiently, while achieving parameters set out by the governing bodies is complex. An issue at a treatment plant or on the network could affect thousands of people and rectifying the issue can bring all sorts of challenges.” However, Fintan draws strength from his years playing sports and the positive impact it has had on him personally and professionally, in providing the ability to work through these challenges.
“Sports and Gaelic football has always been a constant in my life. Football has helped me build friendships, which have stood the test of time. It has helped me professionally also, when working with people to resolve challenges between various stakeholders.”
2020, and now 2021 has brought lots of change for Fintan, not only as a first-time father but also navigating the challenges of living and working from home that Covid-19 has brought.
“It has been difficult year, in that I haven’t been able to see much of my family, with the numerous lockdowns. We welcomed baby Meabh into the world in June, so working from home has some positives as my daily commute is now replaced with spending time with Meabh, Pamela and exercising.”
As a winner of a Connacht SFC medal in 2004 and panellist on the Mayo team that reached that year’s All-Ireland SFC final, the appeal of football is never too far away. Fintan is now coaching the U20 Sligo team where the emphasis is not only on improving fitness and skills but also building relationships.
“Keeping active has definitely helped me throughout my career and even more so during the Covid-19 pandemic, when travel is restricted. I have a great appreciation for the proximity of beautiful walks on my doorstep, like Union Wood, Slishwood and around Castle Dargan. Coastal locations like Strandhill and Rosses Point are just a short drive away too.”
And as for advice for any anyone contemplating a career in engineering, Fintan can’t recommend hit highly enough.
“[Try and] gain experience in all aspects of engineering, continue to learn as much as you can but most importantly develop good working relationships along the way.”

Fintan Ruddy was speaking as part of Engineers Week, which runs from February 27 to March 5. This annual week-long event is supported by the Engineers Ireland STEPS Programme and promotes interest and awareness in engineering as a future career to school students in Ireland.