The fact that all proceeds from the new track will be donated to the worthy local cause of the Mayo Roscommon Hospice Foundation is sure to add to the track’s appeal for people living in the west. 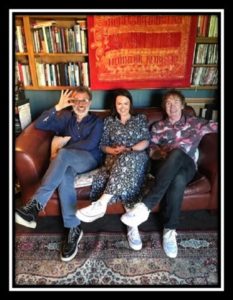 Knockmore native, Laurita Blewitt, has been involved in the hit podcast with Tommy Tiernan and Hector Ó hEochagáin since its launch last September.

Established in 1993 Mayo Roscommon Hospice Foundation has vastly improved the quality of people’s lives across Mayo and Roscommon by funding palliative care and bereavement support services and the development of a dedicated hospice building in Castlebar with a Roscommon hospice to follow.

Kildare singer-songwriter Mick Konstantin has penned a wonderfully amusing ditty (see below) in homage to the The Tommy & Hector Podcast with Laurita Blewitt and the feel-good tune has now been released as a fundraiser for this much-loved local charity.

Mastered by the award-winning producer Brian Masterson and recorded by Greg Malocca at Egoboo Studios with artwork by Ray McDonnell, the project was produced in just 48 hours with all parties giving their services for free so that 100% of the proceeds can go to the Mayo Roscommon Hospice Foundation.

“When we heard Mick’s track, we instantly knew it summed up the spirit of the show perfectly” said Hector Ó hEochagáin. “Then after listening to the song non-stop we thought, this could be the perfect way to help raise funds and awareness for the Mayo Roscommon Hospice Foundation which Laurita is involved with.” 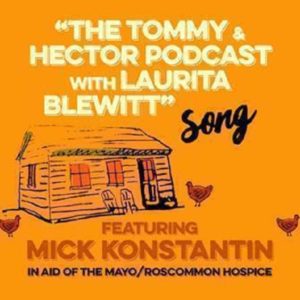 Songwriter and performer, Mick Konstantin remarked: “As a huge fan of the podcast the song just wrote itself, I sent it to the west with the hope that the guys would hear it, never for a second thinking we would be releasing it officially with the blessing of the show.”

“With all our shops closed and fundraising events cancelled, it has been a real challenge to raise funds for our palliative care service. We are incredibly grateful to them”.

“The Tommy and Hector Podcast with Laurita Blewitt” song is out now across all of the major digital platforms.