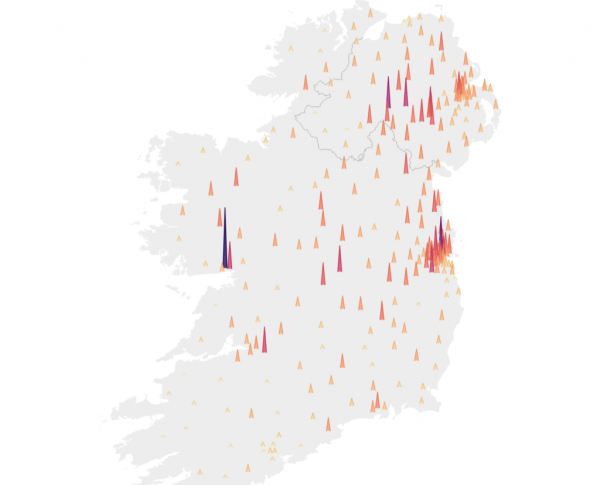 The centre of Galway city continues to have the worst coronavirus infection rate in Ireland, new figures show.

Galway City Central recorded 1,292 cases per 100,000 during February 9th to 22nd, more than five times the national average of 240. This has increased from last week when the area had a rate of 951.

The number of cases in the area is higher than the previous peak in early January. Many are thought to be linked to outbreaks among third-level students in Galway.

In Mayo, three electoral areas have also posted figures higher than the national average, namely Swinford (388 cases per 100,000), Claremorris (380) and Castlebar (300). Between them, 194 positive cases of Covid-19 were recorded in the same 14-day period. Westport has had an incidence rate of 201 arising out of 37 confirmed cases, however, the situation is better in Belmullet and Ballina areas where there were 10 and 26 cases reported respectively.

The next worst-affected area on the island was Ballymun-Finglas in north Dublin, with an infection rate of 798, down from 820 last week.

In Northern Ireland the BT70 postcode saw the highest rate of new infections – 146 people tested positive for the disease over the two-week period from February 8th to 21st.

That amounted to a rate of 673 cases per 100,000 people in the area, which covers Ballygawley in Co Tyrone.

In the North, the BT70 postcode in Co Tyrone recorded no new cases during the 14-day period.

Meanwhile, the public have been urged to keep their focus in the battle against the pandemic, with the HSE warning of a potentially “explosive” impact on healthcare services.

Health service boss Paul Reid has raised concerns over whether the public has the level of resilience needed to get through the current wave of the pandemic.

At an HSE briefing on Thursday, Mr Reid said higher levels of movement have been seen across society, including people going to work and between households.

He said if there is a loss of focus at this time, there is “a risk to all of us, to all of our families and society” and that this risk could rise to “quite an explosive level” in a short space of time.

In the North, the Executive’s plan for leaving lockdown may not be published until Tuesday, Deputy First Minister Michelle O’Neill has said.

Work is set to continue on the plan across the weekend.

“It was our desire to publish a document on Monday and if we can we will,” she said.

“But if it takes until Tuesday, then so be it, as long as we get it right. I think that is more important.”