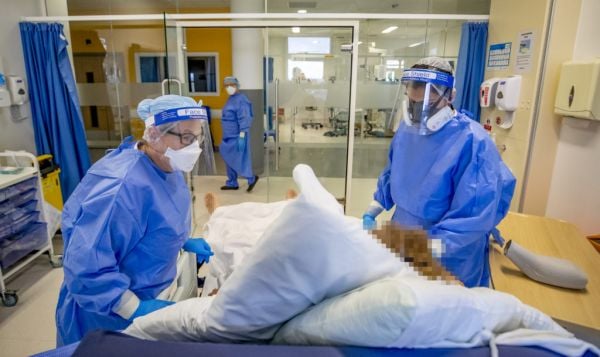 A further 56 deaths and 574 new cases of Covid-19 have been recorded in the Republic.

31 of these deaths occurred in February, 13 occurred in January, three in December or earlier, while a further nine are under investigation.

One of those who died was 16 years old, while the oldest person was aged 97.

The latest figures show 652 Covid-19 patients are in hospital, with 137 in intensive care.

Meanwhile, the Minister for Health has said Ireland has ordered enough Covid-19 vaccines to fully vaccinate its population of some five million people twice over.

Stephen Donnelly said the State had orders in place for 18.4 million doses of vaccines for its programme, which is expected to be significantly ramped up in coming months.

The Government plans to accelerate its vaccination programme, which could see 250,000 doses administered every week by April.

But these figures are heavily caveated on the availability and supplies of the vaccines.

Mr Donnelly said the figures give the public “better hope for brighter days ahead”.

He brought a memo to Cabinet on Tuesday to purchase additional doses including an extra 1.64 million doses of Moderna, as well as 330,000 doses of Valenza, 1.1 million of Novavax and 2.1 million of Janssen.

“Up to 10.3 million people could be vaccinated if these came through,” Mr Donnelly said.

Speaking in the Dáil, he said that between 1,000 and 3,500 people were still arriving in the country every day.

Last week there were around 10,500 arrivals in Dublin Airport alone, he said during a debate on the Government’s legislation on mandatory quarantine for international arrivals.

Earlier Stormont’s Health Minister warned not to “jump the gun” and abandon lockdown in the North too soon.

Robin Swann defended the gradual, step-by-step and cautious approach adopted by ministers in Northern Ireland and said the Republic and parts of the UK had taken similar actions.

Some schoolchildren are due to return to classes next month but DUP leader and First Minister Arlene Foster has said the decision should be revisited.

This comes as a further two people have died in the North after testing positive for coronavirus.

Another 236 cases of the virus were also notified by the region’s Department of Health on Tuesday. – Additional reporting: PA

Mayo set to swelter as good weather arrives for weekend