It was like Christmas Morning at a select number of medical centres in Mayo last Friday as the first of the long-awaited Covid-19 vaccine finally arrived at GP surgeries in Mayo.
The Deel Medical Centre in Crossmolina and Knock Medical Centre were among those to take delivery of the first batches of the Pfizer vaccine for distribution among patients over the age of 85. 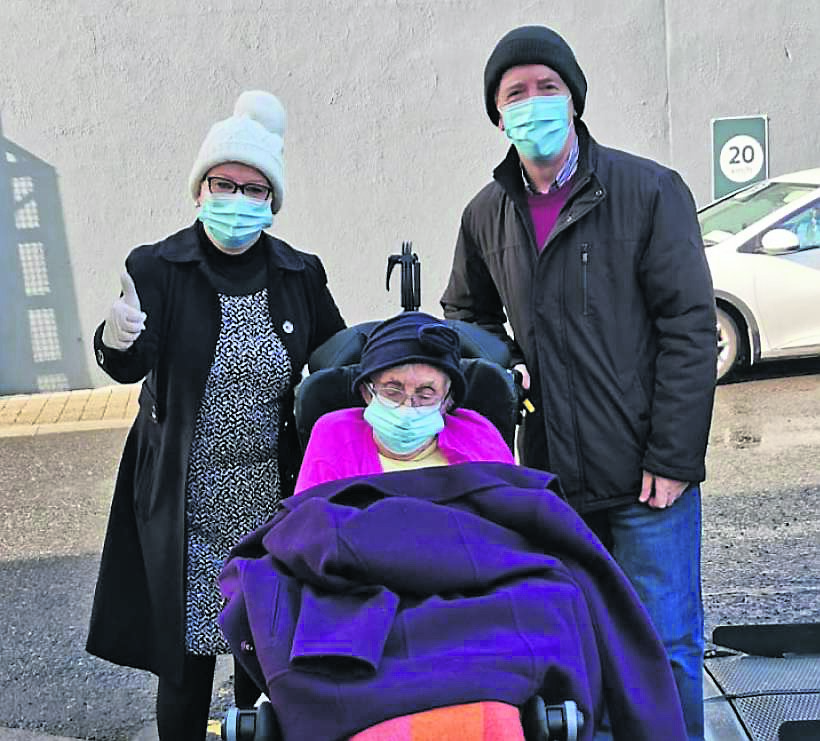 100-year-old Molly Loftus received her Covid-19 vaccine at Deel Medical Centre last week. She is pictured with her son T.P. and Annette.

With a high elderly population in Knock village, it was no surprise when Dr Diarmuid Murray’s surgery was chosen as one of the first in the country to roll out the vaccines.
For Dr Murray it was “a great honour” and for the 72 pensioners, many of who moved to the village to be near the Shrine but haven’t left their homes since March, the sense of relief was palpable.
“It was the most joyful day we have had in the surgery in the past year; the patients were so happy to be getting the vaccine and to be out and chatting to others,” explained Dr Murray. “A lot of people moved to Knock but don’t have any family here. It has been quite a difficult time for them being on their own and not having the social aspect of Mass or St John’s Rest and Care.
“While we were always available we hadn’t laid eyes on some patients since last March.”
The rollout was as a “team effort” with reception staff organising appointments, nursing staff helping to deliver the vaccines, driver Vinny delivering the merchandise and Dr Murray’s daughter Éabha and her Transition Year friends Shauna Langan and Darragh Quinn manning the carpark.
Mayo GPs are expected to begin administering vaccines to patients aged from 80-84 on March 5 and two weeks later those aged between 75 and 79. At that stage, the over 85s will receive their second dose. All patients over 70 are expected to be vaccinated by May.