An early first catch on the River Moy at the weekend has lured local anglers to dust down their rods in anticipation of a bumper 2021 season. 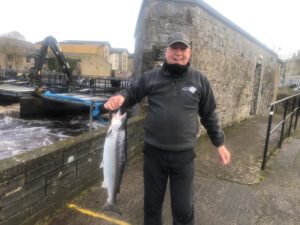 Ballina angler Peter McHugh has caught the first salmon on the Moy for the second year in a row.

Local resident, Peter McHugh, netted an impressive first salmon from the Moy on Saturday last when he landed an 11lbs specimen from just behind the boxes on the Ridgepool Road bank of the river in Ballina.

Peter hails from a well known Achill angling family and is an active member of the Ballina Salmon Anglers Association.

He has been out fishing whenever the weather has permitted since the 2021 season kicked off on February 1 last and his efforts were rewarded after 20 days with the landing of the first salmon of the season.

He had commenced angling  at 7.15am last Saturday morning and hooked his prize an hour later. Luckily, local man Declan Hennigan, was passing in his van at the time and was able to stop and help Peter to land the catch.

Peter caught the first catch in 2020 too. That proved a far more elusive prize as it was 90 days into the season before it was hooked.

Peter said this year’s catch was unexpected so early in the season: “Everybody wants to get the first salmon but nobody expects to,” he remarked, revealing that the fish has been divided up and shared among 10 local households.

The 2020 angling season was a very good one on the Moy. Hopes are high that Peter’s early first catch is a good omen for 2021 and the unexpected event is tempting lots of anglers to come out of hibernation earlier than usual.

Peter stressed that Covid-19 related public health regulations apply to angling so the fishing is currently confined to locals within a 5km radius.

“We have very few women angling though so if any of them would like to get involved they are very welcome,” he said.