A young local couple has decided to run a draw to lift people’s spirits and is offering their home, together with £20,000 (GBP) as the prize. 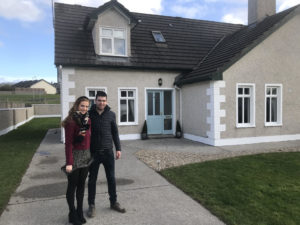 Dyann Kilawee and Gary Cawley pictured outside their home in Enniscrone which they are offering in a prize draw.

Gary Cawley and Dyann Kilawee, who live in Enniscrone, Co Sligo, have launched the remarkable prize draw as an alternative to selling their home in the middle of the Covid-19 pandemic.

They purchased the three bedroom property just over a year ago and have invested substantially in renovating it.

Now, one lucky ticket holder could gain the deeds for the highly desirable house – mortgage free – by just buying a £20 (GBP) ticket.

Dyann, who is originally from Dromore West, and Gary, who is a native of Enniscrone,  have been together since their mid teens and are both front line workers.

They have decided to step off the property ladder for a while so  they can pursue their dreams to travel and maybe even establish their own business in the coming years.

Gary explained: “We were hoping to sell our home in the near future but with the current Covid-19 situation we felt it was not appropriate timing to invite people into our home to view the property, especially when both of us are working on the frontline.

Enniscrone is best known for its 5km golden beach, seaweed baths and championship golf course and has long been a mecca for tourists in Ireland and beyond.

Dyann and Gary’s house sits right in the centre of the seaside resort and boasts panoramic views of Killala Bay.

With almost 1200 tickets sold within just a few days of officially launching the draw, Dyann and Gary are confident that it will be a sell out.

The prize fund and ticket prices are being quoted in sterling as the only available platform to conduct the draw – raffall.com – is UK based:

“The winner will not incur any extra costs, all taxes and charges will be covered by us. In the event that we do not sell enough tickets the draw will still go ahead on the June 7 and the winner will instead receive 75% of the overall ticket sales. The Raffall company will receive the remaining 25% and we will get to keep our home,” Dyann explained.

You can enter the prize draw by clicking here..

Further details on the draw are available by clicking here or here.